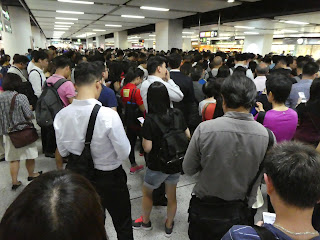 The super crowded scene at Hong Kong Station when I went to board
the Tung Chung line train to attend a screening of Paradox! :O 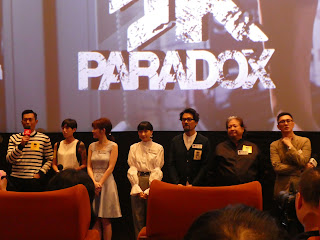 No train woes for the film's director (on the far right), action director
(second from right) and stars (including Louis Koo at the far left) though!


The 2017 Summer International Film Festival got going earlier this evening with the world premiere of Wilson Yip's latest crime actioner.  Touted in the SIFF program as the third instalment of the SPL series (the second of which was largely set in Thailand and had Louis Koo and Tony Jaa in its cast, like this offering), Paradox actually comes across more for much of its running time like the Hong Kong version of the Taken movies starring Liam Neeson.


Although I'm most definitely not a fan of film remakes or rip-offs, I found myself wishing during the last 20 minutes or so of Paradox that its makers had cleaved more to the tried and true Taken formula involving a father (played in this instance by Louis Koo) desperately trying to rescue his abducted daughter.   Actually, I also got to badly wanting the movie to end some 20 minutes earlier than it actually ended doing.


That way, viewers would have been spared having to sit through an ultra melodramatic scene that was more lame and laughable than moving -- though, given the dubious judgement of the voters for the Hong Kong Film Awards, I'm sure it will be what clinches Louis Koo the Best Actor prize next year.  And if you think that's bad (enough), even worse is a coda that clearly was intended to milk further emotions but only got me extremely upset at how physical considerations as well as plot logic got thrown out of the window for it to take place the way that it did.


To be fair, one reason why I felt so frustrated at how terrible Paradox turned out to be when coming down the home stretch was because it actually had quite a few things going for it before it jumped the shark and went downhill with a vengeance.  In particular, Sammo Hung's action direction and Kenny Tse's cinematography are absolutely stellar to the point where what otherwise could have been rather standard chase scenes got freshened up with innovative touches and Louis Koo got made to look like he belonged in an action movie as much as the proven likes of Tony Jaa.


Another visual plus comes by way of the film being mainly set in Pattaya, Thailand -- though, paradoxically, the choice of setting also gets the ball rolling in terms of the "stretch the limits of credulity" game in that there's a surprisingly large number of Cantonese speaking Thais among the southern Thai city's police force (including the characters played by Wu Yue and Ken Lo), prostitutes and even political advisors (with Gordon Lam excelling once more as an oily villain, even while actually mouthing quite a number of lines in Thai). Either that or the Hong Kong policeman who flies to Thailand after his teenaged daughter goes missing while visiting a friend working as a tattoo artist there is remarkly fortuitous at rooting out such individuals -- a couple of whom become his allies, and others his enemies.

The fact that his daughter was in Thailand in the first place ends up causing the cop much angst.  Added emotional baggage comes by way of his being a widower who's raised his daughter pretty much single-handedly ever since his wife was killed in a car accident some years back.  But while scriptwriter Jill Leung did also seek to give one of the Cantonese-speaking Thai policemen an engaging back story, pretty much every other character in the movie are mere ciphers -- even that played by Thai action superstar Tony Jaa (who, not incidentally, is tragically under-utilized in this film, as is Ken Lo; particularly when considering that Paradox is an action movie featuring sackloads of unarmed combat).

The movie's makers also appear to have sought to give it some more dramatic heft by way of having the story include criminals who procure organs from individuals deemed less socially valuable for transplant into those who are politically important and financially well-off.  To my mind though, Paradox would have been a far better film if there had been less point-making and histrionics, and more of the featured action that's not just eye-catchingly spectacular that it will make you gasp and can take your breath away.