Feasting (and some political point-making?) at the 2017 Hong Kong Food Expo 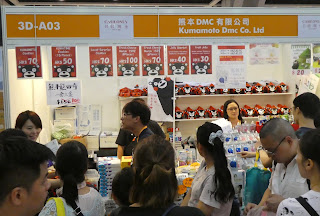 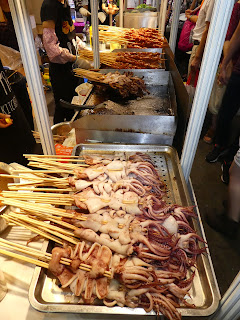 "Stick foods" ready to be eaten at the site! 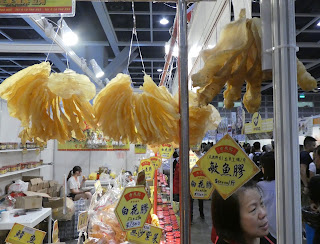 Some of the food stuffs on sale (including the fish maw
hanging in bunches at this booth) were on the pricey side!
Back in 2015, my favorite Pear (Fairy) made appearances at the Hong Kong Food Expo to help promote food products from eight eastern Japanese prefectures (including its home prefecture of Chiba).  Sadly, it was nowhere in sight when I attended this year's edition of the gastronomic fair, though I did spot other mascots (including one for a milk powder product) prancing about and portraits of Kumamon, Funassyi's senpai from Kumamoto, adorning more than one Japanese products booth.
In view of the general popularity of Japanese food and drink in Hong Kong, I actually don't think their presence was needed to boost sales at the food expo's Japanese booths.  In any case, it was quite noticeable -- especially in those sections of the exhibition halls where the booths were set up close to another -- how large the crowds were at the Japanese and South Korean food and drink booths, in contrast to those hawking food products from Mainland China.
Given what's taken place on the political front this week (with strong suspicions that the hand of Beijing is most definitely behind the blows dealt to Hong Kong's pro-democracy movement), the possibility can't be entirely ruled out that there was an element of protest involved in the decision of some of the local visitors to the Hong Kong Food Expo to give the Mainland Chinese booths a wide berth.  Something else that also can't be ruled out (and, actually, is probably more likely) is that there continues to be widespread worry among Hong Kongers over the safety of Chinese food products in the aftermath of the many major food scandals that have come to light in recent years.

Whatever it is, Hong Kongers most definitely aren't turning their backs on Chinese food products bearing the imprint of Hong Kong and Taiwanese companies ("just" those from Mainland Chinese companies).  For, like those representing Japanese and South Korean companies and regions, many of the booths of those from Hong Kong and Taiwan -- and be they selling ready-to-eat foods or food products to be cooked post returning home -- attracted many eager buyers too.
While a good portion of the food fair goers ended up being laden with shopping (some of them packed up in trolley carts given to them by those companies whose products they bought a lot of -- either in quantity monetary terms, or both!), I ended up only taking one small bottle of yuzu-flavored honey (from Japan's Sugi Bee Garden).  This may seem like extremely paltry returns, considering that I ended up spending more than five hours at the Hong Kong Food Expo.
But, then, in that time, I also ended up sampling, outright eating and drinking quite a bit, including Japanese fruit-flavored honey drinks, melon, unagi kabayaki and green tea, Korean seaweed and (super) spicy rice cakes, a stick of grilled pineapple from a Taiwanese booth, a good-sized portion of abalone-flavored noodles (topped with two tiny but tasty abalone) and Malaysian Musang King durian ice cream.  Oh, and the feasting began with a raclette dish featuring melted cheese on boiled potatoes, a pickled gherkin, pickled onions and a generous slice of ham -- since there actually were lots of non-Asian foods available at the Hong Kong Food Expo too! ;b
Posted by YTSL at 11:17 PM