New splashes of color and creativity in Sham Shui Po 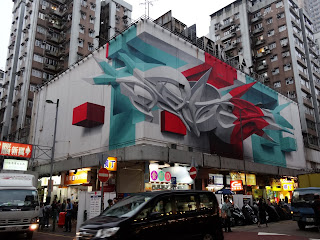 This large piece of street art looks like its bursting
out of the walls as well as bursting with color! 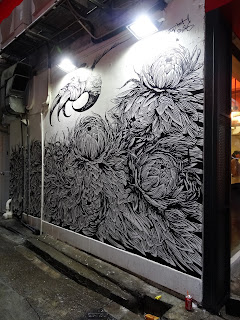 A blooming good example of eye-catching street art? ;b 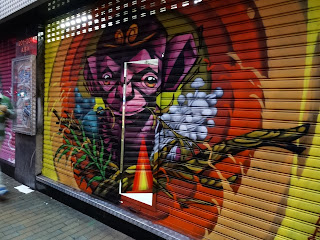 Is this cool work only visible when the store front's shuttered? :O


Sham Shui Po has grown on me.  The first few times I ventured into the district of Kowloon which is among the highest density and lowest income sections of Hong Kong, including to check out an exhibition about the world of sub-divided flats and cage homes held in a tong lau that had been earmarked for demolition, I came away feeling shocked and sad that Asia's World City could be home to such a run-down area; and watching gritty movies set in the area, such as Derek Kwok's The Moss (2008), didn't do much to change my opinion of the place.


Over the years though, as the nearby likes of Mongkok have become more and more filled with luxury watch and jewellery shops, and other stores that cater more to Mainland Chinese tourists than local residents, I've come to feel that contemporary Sham Shui Po is more like the Mongkok of old, where I would go to hunt for items as varied as cargo pants and Hello Kitty collectibles.  And especially after finding that the area is a foodie delight (if you're partial to such as shrimp roe noodles and cow omasum or liver noodle soup!), this old and traditional neighborhood has become a part of the Big Lychee that I regularly enjoy spending time in.


A few weeks back, further color was added to this increasingly vibrant district -- which I've also come to learn that a number of interesting people (including a film director and a sake company sales rep!) call home -- courtesy of the HK Walls street art project which saw 31 local and foreign artists get creative over 7 days in Sham Shui Po.  I'd been meaning to go earlier to check out the creations but rain put paid to my plans to do so twice before I finally was able to take advantage of a rare relatively dry lull to go and do so.

After getting to the area, I must admit to initially getting distracting by Sham Shui Po's regular bustle and attractions, and had some difficulty spotting the new artworks -- not least because I didn't immediately realize that they aren't always located at street or regular eye level.  But after fortifying myself with an early dinner (which cost a bargain HK$53 (around US$6.80)!), I was more able to spot and appreciate the creative efforts that actually blend in better with the general look of the place than I had initially thought they would! ;b
Posted by YTSL at 11:29 PM

Had you asked me a few years ago what I though of street art I would have rolled my eyes.

However after several visits to Montreal I have become a fan of street art. Last summer we left time during our visit to photograph the local street art. My husband drove and pulled over when I spotted art on the side of buildings I wanted to photograph. We also looked online for the locations of street art and on a recent visit took the metro to areas where there were buildings with street art. There is an alley we frequent as the art there changes by season and is wonderful,wonderful.

So I hope you will look for street art as you travel around Hong Kong.

So I am very happy to see your terrific photos of Sham Shui Po.

Hi YTSL -- I have yet to check these out myself but it's cool that the place is being rejuvenated in this way. There are also some food tours that take people here to eat the street food that you mentioned so hopefully the area will retain its character.

I've been looking out for and taking pictures of street art from time to time, in the likes of Penang as well as Hong Kong. Have to say that some of the best street art I've seen in Hong Kong took place during the Umbrella Movement. They may have been taken down/removed now but I cherish the memories and photographs I have of them.

I had wondered if long-time Sham Shui Po residents might not approve of the street art but to judge from the smiles that some people gave me when they saw me taking photos of the street art, they seem pretty happy to have them around and people coming over to appreciate them -- and that I think is really cool.

As for the food: I saw a few more interesting looking eateries (including one on whose building wall one of the street artworks had been painted) on this most recent visit, and plan to try them some time in the near future. :)

This blog entry looks like a good example of local color...Years ago I recall walking from the Star Ferry far up Nathan Rd. Beyond Boundary St I discovered Sham Shui Po and immediately felt it was authentic Hong Kong...Well, I like street art just as much as anyone, but I wonder if eventual commercialization might crowd out the working class feel of this neighborhood.

I recall when I lived in NYC years ago that when artists would move into neighborhoods, attracted by lower rents, that big money would always follow them and expensive stores would spring up, resulting in a loss of character to the area.

It will be interesting over time to see if Sham Shui Po can maintain its old character, or if gentrification will smother it...Enjoyed your link to "Life in West Kowloon," especially your photo from inside a "condemned Tong Lau".

I hear your worries about gentrification but do note that Sham Shui Po is already quite the mix of commercial and residential space. Also, the feeling I get is that the artists attracted to Sham Shui Po are those that don't make the kind of money that the ones whose art gets sold in galleries in Central do. So I think that it'll stay predominantly working-class for a time yet.

On another note: wow re your having walked all the way from the Star Ferry terminal in Tsim Sha Tsui up to Sham Shui Po! Gather that it wasn't summer then; otherwise, I could imagine you turning into a pool -- not just puddle -- of sweat long before you got to your destination! :D