For Kee is the place to go for pork chop rice 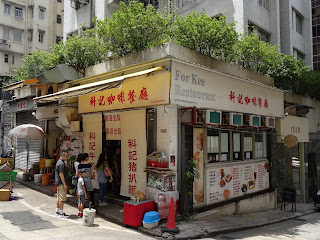 Where the best pork chops are to be had? 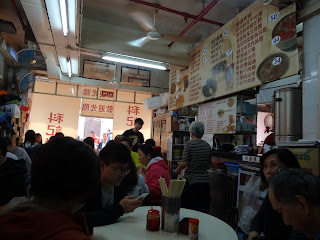 The interior is no frills and far from spacious --
but I think it's got plenty of atmosphere! 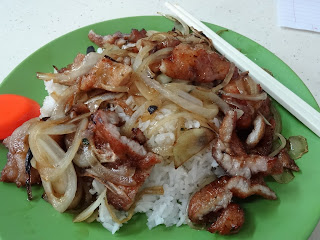 It may not look pretty but do believe me when I tell you
that it sure is tasty! :b

Among the regular items on the menu of a Hong Kong cha chaan teng menu are the closely related pork chop bun and pork chop rice.  But as far as I know, there's only one place here in the Big Lychee where you'll see 9 out of 10 of its customers chowing down on a plate of pork chop rice whenever you are there.

It may be an unassuming-looking place located in a Sheung Wan backstreet but For Kee definitely has amassed its share of dedicated fans over its more than 50 year history.  And I honestly can state that every time I have a pork chop rice craving, I feel obliged to make my way to this small and pretty cramped eatery where, more often than not, one's going to have to wait in line for a bit in order to snag one of its precious seats and then wait for a bit more before getting to chomp on its utterly satisfying slices of sweetly marinated and shallow-fried pork chop which go so well with the white rice that one is served generous portions of.

The classic way to have this dish is to just have the pork chop served atop nothing but white rice -- and I'm often happy enough to go for just this.  Some days though, I feel a need to have some green vegetables in the mix -- and will then ask for choi sum (Chinese flowering cabbage) to be added to my order.  I'm also partial to having a fried egg atop my pork chop rice on those occasions when I want a bit of variety but feel that the pork chop rice with green vegetables option would be too big for me to finish (since the latter comes with a heaping load of choi sum as well as white rice, though with fewer slices of pork chop than if you stick to "just" ordering the plain pork chop rice).

Another option is to ask for tomatoes to be served atop your pork chop rice.  Then there's my current favorite order at For Kee: pork chop rice with fried onions that I think significantly ups the tastiness quotient of the whole shebang!  In addition, one can have noodles or -- outside of peak hours -- buns as one's carbohydrates of choice.  But I've never actually had my pork chop with anything but white rice at For Kee as I'm one of those people who thinks that white rice really goes perfectly with those tasty chunks of meat (the way that it also does with such as char siu, siu yoke and roast goose).

Speaking of roast goose: Years ago, I introduced a foodie friend to my favorite siu ngor place in the Big Lychee.  In turn, she it was who first told me about For Kee.  Daisann, if you ever read this, thanks for all the wonderful meals I've since had at this very "old school" Hong Kong eatery that we both love and no doubt hope will be around for many years to come. :)
Posted by YTSL at 6:20 PM

Did you see the cats?

Just saw one cat -- the one that's in the first photo at the top of the blog post (click on the image to enlarge and see it)! ;b