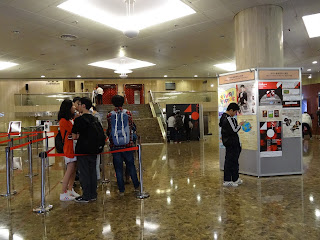 Some Hong Kong International Film Festival screenings
are less crowded than others but be prepared to
queue for a bit to get in regardless!

So much for gender equality.  Although I viewed other works at the 40th Hong Kong International Film Festival with a female protagonist (The Bacchus Lady) and scriptwriter (with Erica Li being the principal scriptwriter of both Nessun Dorma and The Mobfathers), Brazilian drama The Second Mother is the only film of the 19 offerings I checked out at this year's fest with a female at its helm.

Anna Muylaert also scripted this fascinating cinematic effort which revolves around Val (Regina Casé), a woman who left her hometown and her daughter in Brazil's impoverished northeast to go and work as a live-in housekeeper for a wealthy Sao Paulo family of three, and also shows much of the goings-on in that household from her point of view.

As a brief prologue establishes, Val had looked after Fabinho (Michel Joelsas), the biological offspring of her employers, Barbara (Karine Teles) and Carlos (Lourenço Mutarelli), from when the high school senior was a young boy.  Ironically, even while she's become like a second mother to him -- and, in fact, may have stronger ties with Fabinho than he has to Barbara -- Val's daughter, Jéssica (Camila Márdila), feels closer too to another woman than her biological mother on account of her having lived apart from Val for much of her young life.

Seemingly from out of the blue one day, Val gets a phone call from Jéssica telling her mother that she's coming to Sao Paulo and wants to stay with her.  Unexpectedly, the young woman didn't realize until she gets to the big city that her mother lives in the very house in which she works -- in a small room that Jéssica turns her nose at.  In another surprising turn of events, it's revealed that Jéssica is in town to take the same entrance exams for a prestigious and highly competitive university that Fabinho also will be sitting for.

To say the least: Jéssica's arrival into the midst upsets the household's social order; one with clearly defined class divisions that everyone -- both masters and servants -- had adhered to.  Suddenly, there had arrived someone whose behavior and outlook they had assumed would be similar to her mother's but actually turned out to be quite a bit more educated and culturally sophisticated.  In addition, Val appeared to have ensured that Jéssica had grown up with more creature comforts than the older woman had allowed herself.  Most unnervingly of all to the others was that the young woman possessed a confident, assured air that made it patently clear that she didn't only see herself as needing to always obey her elders but also didn't consider herself the social inferior of Val's employers.

It's interesting, and enlightening, to see how Fabinho, Barbara and Carlos react to, and treat, Jéssica -- whose skin, more than incidentally, has the same light shade/color as that upper-class trio's rather than the darker skinned Val.  But what's even more riveting and thought-provoking to behold are Val and Jéssica's interactions, and how it is that the tables get turned as the story goes along as to who is the more ignorant person who still has a lot to learn about life in general, and their place in the world.

Far more than the upstairs/downstairs or family drama it initially looks like it's setting out to be, The Second Mother actually offers up lots of points to ponder about a variety of social situations and existing inequalities.  Rather than be heavily didactic in tone, however, this capably directed and scripted film actually is an engaging offering -- filled with fine acting (particularly from lead actress Regina Casé and the considerably younger Camila Márdila), and possessing some comically absurdist moments, poignant scenes and also quite a bit of suspense and tension at times!