The People vs. Fritz Bauer casts light on a courageous man willing to defy his own government to do the right thing (film review) 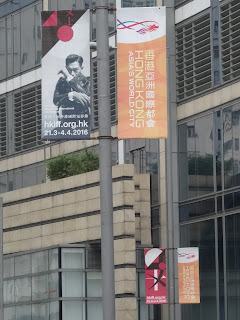 More than midway through this year's Hong Kong International Film Festival, I got to realizing that, unlike last year (when the fest offerings I checked out included the likes of Joshua Oppenheimer's The Look of Silence and Kon Ichikawa's Tokyo Olympiad), I don't have a single documentary in my HKIFF viewing schedule this year.  Instead, perhaps the closest thing to a non-fiction work that I'll see at this year's fest will be Lars Kraume's stirring portrait of a real-life German district attorney who defied his own government to bring a man living in exile in a far away country on another continent to justice.

The People Vs. Fritz Bauer centres on a Stuttgart-born man who had three strikes against him in the eys of the Nazis: seeing that he was a Socialist, a Jew, and also a homosexual (albeit one who hid that part of his identity from much of the world via a legal marriage to a female friend).  Briefly held in a concentration camp in the 1930s, Fritz Bauer (played in the film by Burghart Klausner) managed to flee to Denmark and then Sweden (after the former was occupid by the Germans during the Second World War) before returning to Germany in 1949 and becoming a government lawyer.

Appointed the attorney general of the German state of Hessen in 1956, this cigar smoker with a shock of white hair sought to bring to justice leading Nazis who had managed to escape the clutches of the law, often with the help of sympathizers within the very ranks of the judiciary, police and related institutions.  As this film set in the late 1950s shows, West Germany in the first decades after the Second World War was a place where Jews could occupy senior government posts but it didn't mean that anti-Semitism was dead.  And not only did several former members of the Third Reich continue to be influential figures in the country but certain laws initiated and/or strengthened by the Nazis -- including one against homosexuals -- continued to be in place.

With few allies around him, Fritz Bauer often cut a lonely figure and was prone to despair -- and fear, in the wake of multiple death threats -- but retained a burning resolution to pursue the capture of German perpetuators of major crimes against humanity, including a certain Adolf Eichmann who had overseen the mass deportation of Jews all over Europe to various ghettos and extermination camps, and consequently been one of the chief organizers of the Holocaust.  And even though he was an employee of the state judiciary, Fritz Bauer would prove willing to go against his Fatherland if it meant seeing the justice would be truly served.

While certain details of the story of this exceptional man which is told in this film are well known, others are less so.  Consequently, despite much of it being based on historical events, there are elements of The People vs Fritz Bauer that may seem surprising, shocking and revelatory even to those who reckon that they're pretty knowledgable about the events depicted in this informative as well as involving offering.

Interestingly, although its protagonist comes across as an interesting enough character in this absorbing dramatic work, the makers of The People vs. Fritz Bauer appeared to have decided that a more sympathetic younger character was needed for audiences to identify with.  Unlike Fritz Bauer, Karl Angerman (Ronald Zehrfeld) does not appear to have been based on a real life figure.  And it's through his eyes as well as actions that the viewers get a good sense of how admired and respeted state attorney Angerman's boss and friend is -- along with what he's willing, and has, to sacrifice in order to pursue his goals and just plain do his job.