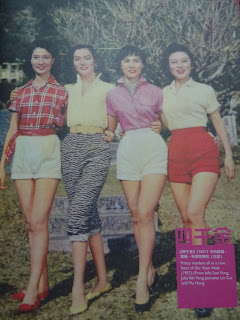 Image from The Cathay Story of the four female stars
of Our Sister Hedy, and Wedding Bells for Hedy 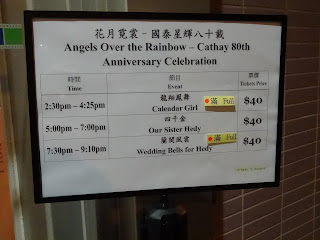 
Last Saturday, I took a break from viewing films at the Hong Kong International Film Festival to go and catch a rare screening at the Hong Kong Film Archive of a 1959 movie of which there reportedly are just two sadly incomplete 35mm prints left in the world.  Wedding Bells for Hedy is one of a number of star-studded works made by the company previously known as Motion Picture & General Investment (MP&GI) that, sadly, is not available on home video.  So I was overjoyed to see it included in the Hong Kong Film Archive's Angels Over the Rainbow -- Cathay 80th Anniversary Celebration program, and -- as an extra bonus -- be among the few of the program's offerings shown with English (and Chinese) subtitles.


Shown back to back with Our Sister Hedy, the comedy-drama that introduced film audiences to the four lovable sisters with very different personalities who also feature in Wedding Bells for Hedy, the Hong Kong Film Archive's digi-beta version of the 1959 follow-up effort makes up for its missing 20 minutes of footage by having still pictures and explanatory text detail what went on in the missing sections.  Unlike most of the other MP&GI movies (including Our Sister Hedy), this later film wasn't shot in black and white -- and therefore offers up depictions of the world of Hedy and her family in glorious color (with a festive scene when the four sisters all dress in red cheongsams being particularly dazzling)!


In Wedding Bells for Hedy, three of the adult siblings are now married women, with two of them also already being mothers.  Eldest sister Hilda (Mu Hong) lives with her husband and two children over in Macau but, when the need or inclination arises, still returns to visit and temporarily lodges at her father's home.  Meanwhile, second sister Helen (Julie Yeh Feng) and her architect husband Ruhao (Peter Chen Ho) live in their own place in Hong Kong but still hang out a lot with her close-knit family.


Rather than move out of her family abode, youngest sister Hazel (Dolly Su Feng), her airline pilot husband and their baby son live there with her father (Wang Yuan Long), third sister Hedy (Jeanette Lin Tsui) and an aunt-like housekeeper.  And it's looked upon as but a matter of time before Hedy joins the married ranks as she's engaged to Heyan (Kelly Lai Chen), another of the many characters appearing in this film which the audience previously became acquainted with in Our Sister Hedy -- though complications ensue, and rumors fly, after the hail-fellow-well-met teacher befriends the hunky widower father (Roy Chiao) of a first year pupil at her school.


While this MP&GI production shares the same director and scriptwriter as Our Sister Hedy, it often has a more melodramatic tone than the earlier movie; the logical consequence, it would seem, of Wedding Bells for Hedy tackling more "grown up" subjects like fears of bankruptcy, suspicion of infidelity and the death of a loved one.  And although there are moments when the viewer(s) will be moved to laugh out loud when watching this 1959 film, some of the time, it's actually because its proceedings seem so amusingly old-fashioned rather than because there's something funny going on that both audiences then and now would react to in the same way.


At the same time, there's no question that -- thanks in no small part to its charismatic stars -- this cinematic offering still manages to charm after all these years.  Our Wedding Bells for Hedy is endearingly quaint and enduringly watchable; with the likes of the energetic Jeanette Lin Tsui, sultry Julie Yeh Feng and affable Peter Chen Ho lighting up every single scene of the movie that they're in and making them far more entertaining than they otherwise would be.

Maybe you should come over to Hong Kong again some day and catch a beloved old movie or more at the Hong Kong Film Archive with me... ;)

If only HK was closer and cheaper! We retirees have to count every penny.

Check the Hong Kong hotel rates, etc. Have been told they've gone done quite a bit in recent months!