Animal deaths and survival on Lantau 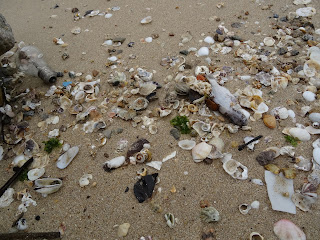 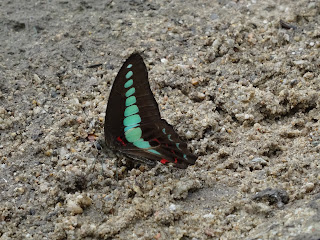 In contrast, the sight of this very much alive butterfly --
which kindly stopped and posed for snaps! -- gladdened my heart :) 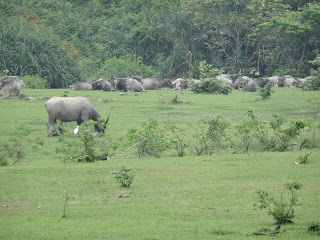 It also generally felt good to be out in
Hong Kong style buffalo country today! ;b
Early this morning, I took part in a beach cleanup for the eighth time in less than a year.  For some reason, and irregardless of whether the beach cleanups have taken place in Cheung Chau or -- as has been the case the last two times -- Chi Ma Wan Peninsula, there always seems to be something new that one sees among the rubbish on the beaches.
On one of the first beach cleanups that I went on, I spotted an uncommon amount of test tubes and other items that looked like they belonged in a medical lab lying on the sand.  On another occasion, there appeared to be an unusual amount of toothbrushes strewn about the beach.  Last month, it was little blue square tiles of plastic whose use, never mind origins, none of us could figure out.  And today, there came possibly the saddest sight thus far for me: lots of dead fish, mostly small but a couple around a meter long each, washed up by the  tide.
My first reaction when seeing all the dead fish washed ashore along with human-created garbage, much of it made out of plastic or styrofoam, was that the sea creatures had been poisoned after ingesting too much plastic into their systems.  And even after a few Lantau Island resident friends suggested that the fish deaths may have been caused by the red tides that have been sighted around Lantau (along with other sections of Hong Kong) in recent weeks, that didn't make me feel better as the (increased) abundance in the occurence of red tides is unnatural even while it's true enough that they're formed naturally by natural organisms.

Put another way: we humans have a lot to answer for and sure do create a lot of damage to the environment.  And yet... amidst it all, nature often shows that it can be far more resilient than we imagine -- as well as beautiful too.
As an example, it never ceases to amaze me that Hong Kong is home not only to over 7.3 million people but also a surprisingly diverse variety of wildlife, including some 240 different species of butterflies -- many of them seriously gorgeous creatures.  In addition, I find it somewhat comforting to know that decades after Lantau agricultural fields became more profitable as land on which to build more houses and other buildings and farmers abandoned their cattle and buffalo to fend for themselves, these horned creatures have managed to survive -- and perhaps even proliferated -- in sections of the island.

Whenever you go to Pui O, you'd pretty much guaranteed at least one water buffalo sighting.  This afternoon though, I also saw a rather large number of these feral animals in the fields around Shap Long Kau Tsuen, about 30 minutes walk away from the Hong Kong water buffalo central that's Pui O.
In view of quite a few new village houses looking to be in the process of being completed in the area, there must be some doubt as to how much longer the horned creatures that call this particular corner of Lantau Island home can do so.  But, then, I've also seen quite a bit of development in Pui O over the past few years -- and yet, seemingly against the odds, its water buffalo herd still very much exists (along with the birds that like to be around them and the humans, some of whom turn out to actually appreciate their being around too)!  Consequently, I remain hopeful that water buffalo -- and cattle -- herds will be able to survive for some time to come in other parts of Lantau too.
Posted by YTSL at 11:51 PM

I believe the buffalo herds are sort of endangered as their habitat is deteriorating. Some villagers had been dumping building refuse into the wetlands. Water resources is at risk as well. I believe I have watched something from RTHK TV a few years ago talking about this.

I've indeed read that the buffalo herds are endangered due to large sections of their former habitat becoming developed, etc. I get the feeling though that they -- and the cow herds -- are far more resilient than some people realize.

E.g., I was surprised to see so many buffalo (still) at Shap Long Kau Tsuen. And with regards to the cows: Until I saw it with my own eyes, I wouldn't have believed them capable of scaling up the likes of 490-meter-high Ling Wui Shan!

So I guess I'm hopeful that these herds will survive for some time to come.