A fun ferry ride and afternoon out on Tin Hau's Birthday 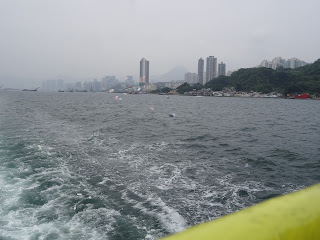 On the ferry ride to Joss House Bay on Tin Hau's Birthday,
joss paper is scattered into the sea by devotees of the Chinese goddess 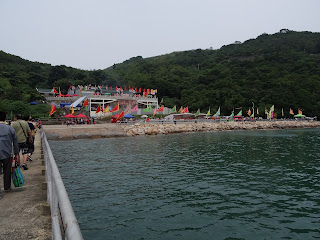 Upon arriving at Joss House Bay, we found the oldest and largest
Tin Hau temple in Hong Kong festooned with colorful flags 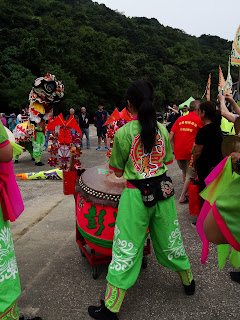 At the front of the temple, lion dancers danced
while drummers beat out the rhythm for them 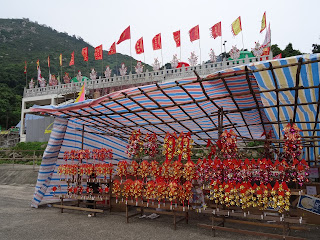 
On just two days each year, a ferry service runs between the North Point Ferry Pier and Joss House Bay Public Pier.  Six years after I first made that trip on Tin Hau's Birthday, I went on the ferry again to take in the festivities at the Tin Hau temple popularly referred to Tai Miu ("big temple") -- this time with two friends in tow.


Despite my expecting it to be otherwise, the ferries we got on at both North Point and Joss House Bay weren't all that full.  So my friends and I were able to easily snag some of what we considered the best seats on the boat: in the open air section of the upper deck, with clear views of the scenery we passed by on the approximately 35-minute-long ferry ride (which I already reckoned was a bargain at HK$60 for the roundtrip fare even before finding out that tickets for the half day Tin Hau Festival excursion offered by the Aqua Luna cost HK$428 a pop!).


As I confessed to my friends, I actually think the best part of the Tin Hau birthday celebrations may well be our getting to go on this ferry ride which affords us views from the water of many parts of Hong Kong that one doesn't regularly get to sail by.  And although the visibility today was not as high as I'd like it to be, the air was still clear enough for it to be enjoyable out -- and the breeze and cooler temperatures than we've had for days added to this being a really pleasant outing.


In addition, it's not every day that one smells incense burning when one's on the boat, or sees joss paper flying into the water during a boat ride -- or, for that matter, spies many other boats festooned with festive flags sailing in Victoria Harbour.  Put another way: it may be on the low key side but there were sure signs -- even on the ferry ride itself -- that today's actually a special day in the Chinese calendar.


Considering that we were at what must be considered the premier Tin Hau temple of the over 100 that exist in Hong Kong, it actually was somewhat surprising to find that the festivities at Joss House Bay are not even one twentieth as intense as Cheung Chau during its annual Bun Festival (the Piu Sik portion of which I attended last year).  Not that I'm complaining: since for my physical comfort, I do like that the Tin Hau Birthday celebrations don't attract huge crowds even at this location.  In addition, there is a certain cultural satisfaction in seeing that this festival remains pretty uncommercialized and geared for the local community.

For the record: the main activities at Tai Miu today appeared to revolve around making offerings (of food, drink and joss paper) to the Goddess of the Sea/Mother-Goddess and/or bidding to fumble under the quilt of the Dragon Bed in Tin Hau's bedroom for good luck items (such as lotus seeds, for fertility, or "lucky money").  Oh, and there were to lion dances to watch, including one that involved a seemingly half-drunk "lion" that seemed to enjoy sporadically spraying people with beer! ;D
Posted by YTSL at 10:22 PM