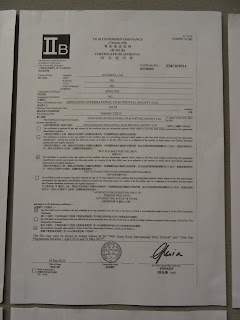 The certificate of approval for Goodfellas
from the Hong Kong censor board ;)

Before the 40th Hong Kong International Film Festival began, I got to noticing that I had a few films with running times that were over 2 hours long in my viewing schedule and worried that viewing them would prove gruelling.  As it turned out though, time seemed to fly by when Doctor Zhivago (with a running time of 200 minutes), Intolerance (black and white as well as 167 minutes long) and Goodfellas (the shortest of the bunch at "only" 146 minutes in length!) played on screen -- with all those movies being ones which I got much enjoyment out of viewing as well as can understand why they are considered classics of cinema.


The film adaptation of Nicholas Pileggi's book by about a real life mobster turned FBI informant, its story (which begins in 1950 and covers decades) is narrated and largely told from the point of view of Henry Hill, a half Irish-, half Italian-American Brooklynite who grew up idolizing the gangsters he saw ruling his neighborhood's roost and realized his dream of becoming one when he was still in his teens.  Played early on by Christopher Serrone but for the bulk of the movie by Ray Liotta, Henry comes across as essentially a good fellow even though he commits crimes for a living, takes drugs and cheats on his wife Karen (Lorraine Braco).


Early in his courtship of Karen, however, and also when hanging out with his buddies, James Conway (Robert De Niro) and Tommy De Vito (Joe Pesci), Henry often looked to be enjoying the good life and having a hell of a great time.  Like with the hedonistic protagonist and his buddies of Martin Scorsese's The Wolf of Wall Street, the viewer knows that what the self-styled goodfellas are doing is not morally exemplary.  Yet much of it looks like so much fun that, way more than any of the Young and Dangerous movies that were often criticized for being akin to triad recruitment works, I can see Goodfellas making people yearn to experience that high crime life themselves!


Still, one just knows that those times can't last; and what with these guys actually being pretty hardened gangsters, it really doesn't take much to upset the applecart and not only get tempers fraying but people deciding to go against -- and get rid of -- others in seriously scary ways.  And when Goodfellas takes on a dark tinge is when one gets to truly realizing how mesmerizing to watch the likes of Robert De Niro, Ray Liotta and Joe Pesci (whose portrayal of short-tempered as well as physically diminuitive Tommy de Vito won him a Best Supporting Actor Academy Award) can be.

Technically polished, with costumes and set designs that really help its period look, Goodfellas doesn't only look good but also sounds good, with its killer soundtrack -- as well as the seamless editing -- helping things to feel like they're moving smoothly.  Almost shut out at the Oscars (with that year's major awards going to Kevin Costner's Dances with Wolves), my sense is that this is one of those films that not only stands the test of time but may get better appreciated with each passing year.


On a local Hong Kong note: while waiting in line to get into the screening of the film, I got to chatting with the couple standing behind me.  The man (who's white British) was talking about how he was preparing his Japanese girlfriend for what, to him, was the movie's large amount of gore.  My reaction was, "But it's only Category IIB!"; and therefore really pretty mild when compared to violent Category III crime films from Japan and Hong Kong such as, say, Takashi Miike's Ichi the Killer, Billy Tang's Run and Kill and, for that matter, fellow 2016 HKIFF offering The Mobfathers!
My rating for this film: 8.5
Posted by YTSL at 9:29 PM