Francofonia contains musings about the Louvre, and much more (film review) 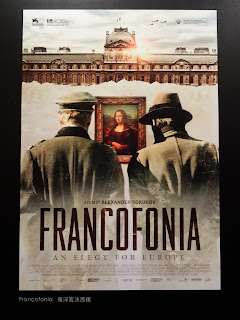 Museophile that I am, I've been known to check out a film just because it's got the word "museum" in its title (e.g., 1998 South Korean romantic offering Art Museum by the Zoo) or has a museological establishment as its subject (such as the two museum documentaries I viewed at last year's Hong Kong International Film Festival).  But despite it and being filmed entirely within the Hermitage and purporting to be a love letter to that great museological institution, I've not (yet) viewed Aleksandr Sokurov's acclaimed Russian Ark.

One reason for this is that I've not been aware of that 2002 historical drama being shown on a big screen anywhere near me.  If truth be told though, I've also been somewhat put off by the main thing about the film that usually gets raved about is how it was shot in a single, uninterrupted take.  Put another way: it seems that the standout thing about this work is technical in nature rather than concerns its content.

Although it was rumored that Francofonia would utilize the same filming method, Sokurov's second film about a museum was not shot in a single take.  At the same time, the Russian director-scriptwriter also does employ some unconventional techniques in this 2015 work that makes for his take on telling the story of the Louvre, France's greatest museum, more idiosyncratic than it could -- and probably should -- have been.

For most filmmakers, Francofonia's main tale, about the collaboration between the then director of the French National Museums, Jacques Jaujard (Louis-Do de Lencquesaing), and the German military officer appointed by Hitler to oversee the art collection of Nazi-occupied France, Count Franz Wolff-Metternich (Benjamin Utzerath), would be interesting and substantial enough to be the sole subject of a cinematic offering.  And this especially when one is able, like Sokurov was, to supplement his dramatic reenactment of this relationship and its outcome with historical footage of representatives of the Third Reich in Paris shortly after the French capital city had fallen into Nazi hands in the summer of 1940.

Instead, Sokurov opted to also throw in scenes in which the symbol of the French republic (as well as an allegory of liberty and reason), Marianne (Johanna Korthals Altes), frequently declaims “Liberty, equality, fraternity!” as she roams about the Louvre, and Napoleon Bonaparte (Vincent Nemeth) points out his portraits and artworks that he brought to France, and the Louvre, as spoils of wars that he won.  And while some might find these sections in the film to be a playful way of referencing other periods of the Louvre's history, I, frankly, found them to be overly fanciful and quite ridiculous.

Indisputably the most unnecessary and ineffective sections by far of Francofonia for me were those in which a man (played by Aleksandr Sokurov himself) in an artwork-filled apartment Skypes with a certain Captain Dirk whose container ship containing the entire contents of an unnamed museum is being buffeted by high waves.  While they're supposed to be tense on account of the calls sometimes getting cut and the ship looking to be in danger of getting wrecked, it's hard to care for what's going on in those scenes as it's hard to figure out what they're supposed to mean as well as why they are in the film.

An ambitious work that sought to cover a lot of ground, Francofonia ends up feeling too much like an indulgent philosophical ramble undertaken by someone who doesn't care whether or not he tries the patience of others.  And it doesn't help that my suspicion is that its director-scriptwriter tried so hard to be different that he was prepared to sacrifice narrative coherence and leave its viewers metaphorically stranded at sea.

Francofnia is kinda similar to his Elegy series of short films/ hybrid documentaries (Moscow Elegy, Oriental Elegy, Elegy of a Voyage), where he presents his documentary subjects via stream of consciousness / inserting himself in the films. I usually prefer them over his more conventional narrative stuff (Father and Son, Faust etc) because the experience is more unique, and everything's more dense and expansive. I actually loved Francofnia, and was a little taken aback when it ended.

Thanks for sharing your thoughts re "Francofonia" and other works by Aleksandr Sokurov. I know that the Russian filmmaker definitely has fans. I just think his offerings are too rarified for me. Something I noticed is that "Francofonia" was actually more interesting to think about and analyze than view. Make of that what you will! ;)

You don't sound too thrilled with this film, but the subject matter itself sounds interesting...A film entitled "The Train" ('64) is worth seeking out. Paul Scofield plays a Nazi officer who is obsessed with transporting paintings from museums in France to Germany via train.

You're totally spot on re my not being too thrilled with the film but the subject matter fascinating me. I know it may sound weird but because the subject matter sounds so interesting, I wish it had been given better treatment. And FWIW, that's also why I was disappointed by "The Monuments Men"... And thanks for the tip re "The Train".