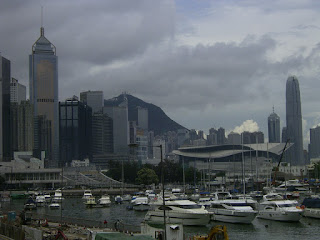 The Causeway Bay Typhoon Shelter figures in
The Legend of Wisely as the place the protagonist
moored his boat while he was in Hong Kong :)

Indiana Jones has a lot to answer for.  While attending archaeology field school in the Four Corners region of the USA during my sophomore summer, I saw a number of my fellow anthropology and archaeology students trying to emulate the fictional archaeologist's daredevil ways -- and learnt that one of them actually broke his leg on the car journey back to a camp one day as a result!

Although it was never explicitly stated, it's also pretty clear that Raiders of the Lost Ark  and Indiana Jones and the Temple of Doom (some scenes of which were shot in Macau) had quite the impact and influence on a number of Hong Kong moviemakers; with Jackie Chan's Armour of God II: Operation Condor and Michelle Yeoh action vehicle Magnificent Warriors being among those Hong Kong movies that look to have borrowed a number of elements from the George Lucas and Steven Spielberg collaborations.

And even while The Legend of Wisely is largely based on the Wisely Series of stories by prolific scriptwriter-novelist Ni Kuang (the first of which had been published in serialized form in a local newspaper in 1963), it's hard not to also see some Indiana Jones-type touches in an action adventure film whose intrepid protagonist journeys from Hong Kong to South Asia (where Indiana Jones and the Temple of Doom was largely set) and Egypt (where the archaologist hero played by Harrison Ford spent time in Raiders of the Lost Ark).

Released in time for Chinese New Year 1987, this fun movie stars (and was produced by) Canto-pop singer-actor Sam Hui as the titular Wisely (or Wai Si-Lei, as you can hear the protagonist's name actually being pronounced in the movie).  A famous writer of sci-fi tales who comes across as well able to look after himself in a fight, he journeys to Katmandu, Nepal, to meet an old friend, David Ko (played by Cinema City co-founder Teddy Robin Kwan, who also directed the film), and promptly gets embroiled in a plot involving a mysterious relic known as the Dragon Pearl which several individuals want on for a variety of reasons.

Housed for generations in a mountain temple in Nepal, it's stolen by the devious David -- with the inadvertent help of Wisely -- and brought over to the luxurious abode of Triad boss Pak Kei Wei (Ti Lung) and his sister Sue Pak (Joey Wong), whose favorite books just happen to include those by Wisely.  After he is contacted by the mountain temple's precocious Little Master (Oh Yau Lun), Wisely decides to make amends by returning the Dragon Pearl to the religious group who venerate it.  But in order to do so, not only does he have to go up against the formidable Pak Kei Wei and his gang but also battle Howard Hope (Bruce Baron), a reclusive billionaire living in Egypt who appears to be endowed with some scary supernatural powers.

Filled with much more action than sense, The Legend of Wisely is the kind of movie whose story one shouldn't take too seriously or over-scrutinize.  We're talking, after all, of a film where science fiction, superstition and facts mix, larger than life characters abound, and everyone -- be they Caucasian, Nepali or Chinese -- can speak and understand Cantonese.

Made on a way smaller budget than the Indiana Jones movies, The Legend of Wisely actually looks pretty good; with some of the best use of foreign locations that I've seen in a Hong Kong movie (probably thanks in no small part to cinematographer Peter Pau) and really interesting, even inspired, set and overall production designs (courtesy of art director Yee Chung Man). And although it's just 85 minutes long, this kinetic offering feels so eventful that you'd scarcely believe that it's actually shorter than the average feature film!

Been ages since I saw it but quite liked it!

I think I liked it more than you though since I gave the movie a higher rating than you did! ;b

Only because I am a tougher grader!

Believe it or not: some people already consider me too tough a grader! ;)