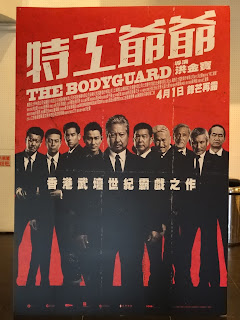 The Hong Kong poster for what appears to be
a star-studded, bad ass movie
The Bodyguard (Mainland China-Hong Kong, 2016)
- Sammo Hung, director (and action director)
- Starring: Sammo Hung, Andy Lau, Jacqueline Chan, Deng Chao
From the looks of its Hong Kong poster and trailer, Sammo Hung's first directorial outing since 1997's Once Upon a Time in China and America promises to be a star-studded as well as action packed movie.  But while Sammo Hung most certainly is its leading man and Andy Lau (who also co-produced the film) features prominently in the offering too, the likes of Tsui Hark, Yuen Biao and Eddie Peng turn out to have much smaller roles in the movie than the publicity materials would have one think.
Furthermore, although there is quite a bit of hard-hitting action in this Mainland China-Hong Kong co-production which has the same English title as the 1992 Hollywood work which starred Kevin Costner and Whitney Houston, not only should fans of the Seven Little Fortunes be aware that Sammo Hung is the only former student of Master Yu Jim Yuen who features in The Bodyguard's fight scenes but even his character spends a significant amount of time in the movie doing nothing more active than strolling about town, fishing at a local river or playing board games with a preteen kid (who's referenced in the film's Chinese title, which translates into English as "My Special Agent Grandpa")!
For while he is amusingly shown in The Bodyguard's opening credits as a Central Security Bureau officer when then US President Richard Nixon made his historic visit to China, Lao (i.e., Old) Ding -- as the titular character is frequently referred to in the film -- is long retired from the force.  Worse, after exiling himself to a small town close to the border with Russia in the wake of a family tragedy, the portly pensioner is now suffering from dementia -- which Sammo Hung the actor (as well as director) looks to have interpreted to mean that his character should have a blank look for much of this movie.
For some reason, two females develop an affection for Lao Ding.  The first, his ethnic Korean landlady Miss Park (Li Qinqin), appears to exist mainly for comic purposes.  The second, Cherry (Jacqueline Chan), is the young daughter of loser neighbor Li (Andy Lau) -- and is supposed to be cute and adorable but was, to my mind, so utterly charmless that I frankly found it really annoying that her part was so substantial and salient to the overall story.
After Li lands into major trouble and incurs the wrath of local gangster Choi (Deng Chao) as well as hoodlums on the other side of the border, he not only puts himself in grave danger but his little daughter as well.  When a trio of goons go over and attempt to grab hold of Cherry one evening, Ding proves more than capable of protecting her from harm as well as shows how much he cares for the little girl who's become his surrogate granddaughter.
The Bodyguard's fight scenes show how good an action actor (and action director) Sammo Hung still is.  But while he's revealed his dramatic chops and overall directing prowess in other films (like Painted Faces and Eight Taels of Gold, in the case of the former, and Pedicab Driver, in the case of the latter), the film veteran largely fails to do so in -- and with -- this movie which, among other things, often comes across as tonally schizophrenic as well as plain uneven in quality.
My rating for this film: 5.5
Posted by YTSL at 11:59 PM