Fake mermaids, pseudo-models and their admirers at Shek O Headland this afternoon! 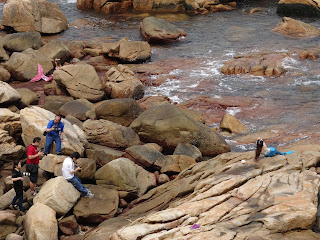 The things one sees when out and about in Hong Kong... :b 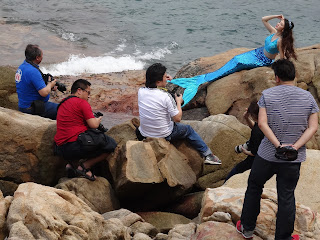 Lang mo and long yau in action this afternoon!

The last time I went to Shek O, my mother (who was visiting Hong Kong at the time) and I got much amusement from watching ultra-formally attired couples posing for wedding photos on Shek O Beach.  And as two friends and I made our way out to Tai Tau Chau earlier today, we spotted a woman in bridal garb and her dolled up husband-to-be getting ready to have some photos taken at the scenic far eastern end of Shek O Headland.

Whatever antics that couple got up to paled in comparison though to what we beheld taking place on the rocks of Shek O Headland this afternoon.  For, rather hilariously, and possibly inspired by Stephen Chow's Mermaids (this Chinese New Year's biggest cinematic hit), we spied two young women who had dressed up as mermaids -- one in blue, the other in pink, both in costumes that were really bright, shiny and attention-grabbing -- perched close to the shore!

As we got nearer to the scene, my native Hong Konger friend and I realized that the two females in mermaid costumes were lang mo (AKA pseudo-models) and the men they were posing for were long yau (AKA "salon fans").  As we set about explaining to the third member of our group -- an American woman who moved to Hong Kong just around a year ago -- what we were witnessing, it struck me that what we were telling her sounded pretty weird: i.e., that here in the Big Lychee, there is a particular cultural phenomenon which involves certain photography enthusiasts who have a reputation for being socially awkward and also, well, haam sup (lecherous) to club together to hire a sexy pseudo-model to snap photographs of -- and usually in public spaces rather than, say, a private photo studio!

As on the previous occasions when I've seeen long yau out photographing lang mo, the amateur photographers I spotted in action this afternoon looked to be equipped with some pretty professional-looking (and undoubtedly expensive) camera equipment.  But today was the first time I saw a female out clicking away along with the men.  Considering how the other women in their party were attired: I wonder, is she a fan particularly of mermaids (even fake ones) rather than lang mo, per se? ;b
Posted by YTSL at 11:35 PM

Can you hear me laughing. Just love this 'fake mermaids on the rocks' (sounds like a trendy cocktail) post. I would love to do something like this.

You'd love to do what -- pose like a mermaid on the rocks, take photos of fake mermaids or...? ;b

Both-I'd love to take photos of the mermaids and also dress up (not a mermaid.....more coverage needed) and pose on the rocks....