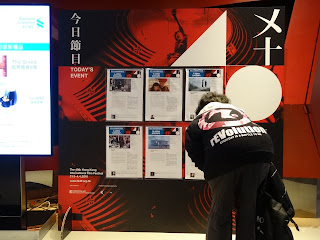 A common occurence while the Hong Kong International Film Festival
is taking place: attendees reading about films, not just watching them ;)

The Balkans are a part of the world which I've never been to and don't feel all the knowledgable about.  Thanks to books like Anthony Hope's The Prisoner of Zenda and Rupert of Hentzau which I devoured back in high school, I had a romantic image of that section of Europe in my youth.  But my perceptions of the area darkened considerably upon learning of the terrible goings on in the former Yugoslavia, particularly Bosnia, during the final decade of the 20th century.

Although as early as 1997, films such as Michael Winterbottom's Welcome to Sarajevo were providing dramatic portrayals of the Bosnian conflict, it wasn't until 2001 that I saw a work made by someone from that area, in which Bosnians were shown at the front and center of the action.  Danis Tanovic's No Man Land made quite the impact on me.  And in the years since, pretty much every time that I've had a chance to view a new work by the Bosnian filmmaker on a big screen, I've done so -- be it a contribution in short film anthology 11'9''01 or another feature length work like An Episode in the Life of an Iron Picker.

Death in Sarajevo, Tanovic's latest offering, had its Asian premiere at the recent Hong Kong International Film Festival.  A multi-stranded work that contains references to the war in Bosnia and the Srebrenica massacre, it is largely set within the confines of a historic hotel which came into being during the Austro-Hungarian occupation of Bosnia and Herzegovina, and is located in the city where the then heir presumptive to the Austro-Hungarian throne, Archduke Franz Ferdinand, and his wife were shot and killed by a teenaged assassin.

It's the 100th anniversary of that fateful assassination carried out by Gavrilo Princip that is widely held to have triggered a chain of events that led to the First World War, and the hotel is playing host to a French VIP (Jacques Weber) taking part in the anniversary commemorations who is being zealously guarded by security forces.  As he plans and rehearses what he will say in public that evening in the presidential suite, up on the same hotel's rooftop, a TV journalist (Vedrana Seksan) interviews various individuals about that event, including a fiery tempered Bosnian national with the same name and ethnicity as Princip (Muhamed Hadzovic) who upsets her so much during his short time in front of the camera that she walks off the set to continue arguing with him.
Behind the scenes, more trouble brews as the establishment's staff decide to go on strike after not having paid for two months.  The hotel manager (Izudin Bajrovic) and his assistant cum chief receptionist (Snezana Vidovic) try various ways to quell the unrest in the ranks.  But, the film seems to imply, peace does not usually get to prevail in Sarajevo; not least because so many bitter divisions continue to exist within Bosnian society.

With so many sub-plots to follow and characters to keep track of, it can come as a shock that Death in Sarajevo is just 85 minutes long.  All in all, it's really a lot to take in within a short period of time.  Not unexpectedly, the plethora of stories and voices can lead to the viewer feeling rather overwhelmed.  Consequently, even while I admire and respect its helmer's ambition and willingness to present a variety of views, the result can be bewilderment, even confusion, rather than actual understanding of -- never mind empathy for -- a people who appear unable to let go off their violence-ridden past in order to create a better future together.