So much cool stuff to see at Cape d'Aguilar! 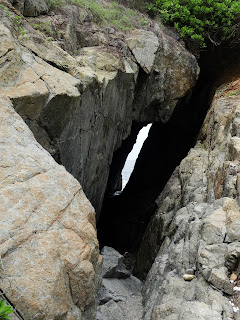 The first sea cave I've ever been into in Hong Kong
-- and, actually, maybe in the world!

Click on the above photo to take in a panoramic view
of a surprisingly rugged section of Hong Kong Island :b

For years, every time I took the number 9 bus to or from Shek O, I wondered why it stopped at Windy Gap as I never ever saw any one get on or off there.  But this started to change a couple of years ago, with my seeing a number of hikers making use of this bus stop.
Upon doing a bit of research, I found reports of a nice hike to be had from Windy Gap to Cape d'Aguilar and back, and resolved to check it out for myself; this despite also having read that members of the public are discouraged from venturing into this area where a number of transmitting and related stations are located together with now ruined military installations).  After two failed attempts (one because of weather; the other due to a bus route change I previously didn't know about), I finally made it out to Cape d'Aguilar on the third try!  And boy, was I glad I did so upon seeing the many interesting sights and stunning views in the area!
Among other things, Cape d'Aguilar is home to Hong Kong's first marine reserve, Hong Kong's oldest lighthouse, a whale skeleton installed outside the main building of the University of Hong Kong's Swire Institute of Marine Science, and a sea cave which is easy to get to but scary to venture into (because of how loud the pounding waves that created it are and the water looking like it can get really high up as well as far into the cave).  In addition, there's the hardly small matter of some incredible geological features being on view there, including of neighboring Kau Pei Chau and the surrounding exposed rocky coast, and also big, fierce waves that give a really good idea of how strong and powerful the forces of nature can be.
On the afternoon that a friend and I ventured out to Cape d'Aguilar, we also spotted many interesting flowers in bloom and winged critters (including large birds of prey as well as pretty butterflies and dragonflies) about the place.  Add in the temperature being in the pleasantly cool low 20s (Celsius, not Fahrenheit!) and not a drop of rain falling on us despite there sometimes being some threatening looking clouds in the sky, and it truly felt like we were being blessed -- though whether it was by Mother Nature or a(nother) supernatural force, I can't quite say! ;b
Posted by YTSL at 7:16 PM

Yes, that sea cave was pretty spooky! We were so brave to go in as far as we did! What a great day to see this beautiful area.

Part of me thinks we should have gone further into that sea cave but another part of me thinks that it's better to be safe than sorry! In any case, we sure didn't lack for interesting sights to see over at Cape d'Aguilar, right? :)