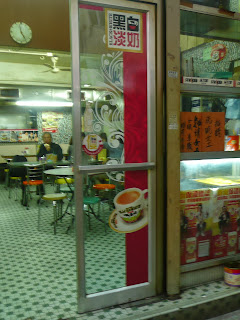 Enter this Mongkok cha chaan teng
and you'll feel like you've gone back in time... 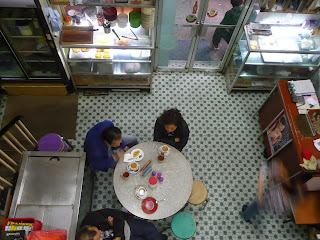 Full of atmosphere, it's understandably a favorite
location of many Hong Kong filmmakers 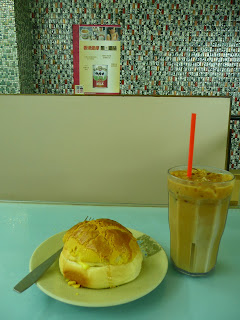 What I had on my most recent visit there ;b

Last Saturday, I went shopping in Mongkok.  As those who know me will know full well, shopping is hardly one of my favorite activities.  But post Vietnam trip (where I discovered lines running through some of my shots, especially those that I took while visiting dark caves in Ha Long Bay), I felt obliged to look for a replacement for the wonderful Panasonic Lumix DMC-TZ2 that's served me well for some five years now but fear will shortly give up the ghost (even while still being able to take photos such as the ones at the top of this blog entry).
Early on in my search for a new camera, I got to realizing that I couldn't just replace my camera with the latest in Panasonic's TZ line since, as I was repeatedly told in different camera and electronics stores that I went to, that particular line is no longer popular with Hong Kong people.  This even though reviews I've read online and in the latest issue of a British camera magazine for it were highly positive.
Bewildered and exasperated, I decided I needed some time and a quiet space to mull over what options I had and what to do next.  So I headed over to a cha chaan teng I knew would be not busy or crowded on a Saturday afternoon -- and this despite it offering food and drinks that were tasty and cheap, and the place having been familiar to thousands, if not millions, of Hong Kong movie fans by virtue of it having appeared in films such as PTU, Tales from the Dark Part 1, and -- according to blogger A Hero Never Dies -- Beast Cops.

I think it speaks to my stress level that I initially mistakenly walked along the wrong stretch of Canton Road and, upon not spotting the China Cafe, freaked out and fretted that it had gone the way of the Tin Hau cha chaan teng that had featured in Sparrow.  Fortunately, after going up a different block, I found this comforting cafe to still be around -- and, as I figured, an uncommon oasis of calm amidst the bustle of one of Hong Kong's busiest and physically densest districts.
Even if you're not a Hong Kong film fan(atic), I'd recommend the China Cafe for its old time atmosphere, cool decor, calm feel and budget prices.  For the record, the bill for the bo lo yau  (pineapple bun with butter) and tong lai cha (Hong Kong-style iced milk tea) I had to both calm me down and revive me somewhat totaled just HK$21 (~US$2.71).
And the icing on the cake over at this classic cha chaan teng on 1077A Canton Road was that at no point was there a sense that I could take all the time I want to consume my food and drink.  All while indulging in a fantasy that I was in a Hong Kong movie, of course... ;b
Posted by YTSL at 10:20 PM

After your Vietnam trip, it's nice to have you getting back into the HK pulse, reporting from gritty Mongkok (complete with HK film references).

Funny you should be looking for a new camera - I am too. I've been searching for a compact digital camera with a viewfinder. I like taking pictures with a viewfinder, holding the camera at eye level, setting up your shot and snapping away. Unfortunately, viewfinders on compact cameras are getting increasingly rare. I don't like traveling with a big heavy camera, so I'll keep searching for an ideal compact...Good luck in finding a camera which suits your needs.

Re cameras: I eventually went for a Sony Cybershot DSC-HX50V. Am pretty happy with it thus far -- and for the record, the photos on my blog entry for last Sunday were taken with it. :)