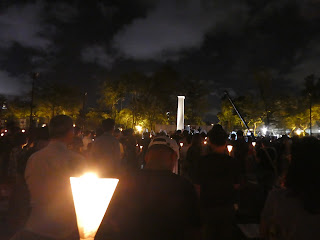 A typical June 4th scene in Victoria Park not so long ago
Back in early January, lawyer-activist Chow Hang-tung was sentenced to 15 months in prison for incitement for a banned vigil to commemorate those who died in Beijing’s crackdown in Tiananmen Square in 1989.  Yesterday, that conviction was overturned after a court ruled that the Hong Kong police's decision to ban last year's June 4th vigil was unlawful.
"Wearing black and standing before judge Judianna Barnes at the High Court on Wednesday, Chow appeared surprised and joyful when the results of the appeal were handed down.  As court was dismissed, people in the public gallery let out cheers before being told by security guards to quieten down." Thus reported the Hong Kong Free Press (HKFP).
It's not that Chow hasn't been maintaining her innocence all along.  But, as an AFP piece noted: "The ruling is a rare rebuke of authorities in a city where the public commemoration of Beijing's deadly 1989 crackdown has been virtually wiped out in recent years."
The same AFP piece contains useful contextual information for those who didn't realize, including the following: "Chow, a 37-year-old lawyer and one of Hong Kong's most prominent democracy activists, led a now-disbanded group that used to organise the city's annual candlelight vigils to mourn those killed in Tiananmen Square when China sent troops to crush democracy protests."
Also: "Police have banned the last three vigils citing the coronavirus and security fears and the courts have already jailed multiple activists who defied those bans, including Chow"; thus making it so that the last authorized June 4th candlelight vigil allowed in Hong Kong was back in 2019 -- the 30th anniversary of the Tiananmen Square Massacre.  One which hundreds of thousands of people attended.  Indeed, if the vigil organizers (who included Chow) are to be believed: the number of attendees for the 2019 vigil -- which took place just five days before the anti-extradition bill march of June 9th that had 1 million participants -- actually hit a record high.
Quoting the HKFP piece once more: "In a written judgement, [Judge] Barnes said that in banning the vigil, police had not abided by a section in the Public Order Ordinance that states a public meeting should not be prohibited if conditions could be imposed."  Specifically, "Although the organisers of the gathering had said they were willing to abide by any measures set out by [the] police… [the] police did not seriously consider this, and did not raise measures or conditions to be considered such as restricting the time during which people can enter the venue, the number of attendants… a requirement for scanning the [Covid-19 app] LeaveHomeSafe, wearing a mask, a ban on eating, etc., that could control the risk of the virus spreading".
The AFP piece sums it up as follows: The police were adjudged to have "wrongly banned the vigil in 2021 as they did not "proactively and seriously consider" ways to faciliate a public gathering, as was required by law.  As the government failed to prove the ban was legally valid, Chow's articles would no longer constitute a crime and her conviction was scrapped on appeal."
So a rare victory, then, for not only Chow Hang-tung but rule of law in Hong Kong.  Except that "Despite her court victory, Chow remains in custody as she faces further prosecutions including for national security charges which carry up to a decade in jail."  Also the Department of Justice has expectedly declared it will appeal this decision in a higher court.
Something worth noting too: Judge Judianna Barnes is already 70 years old.  One wonders how long more she -- and judges like her who actually seem to try to make sure that justice is served -- will be presiding over courts and trials in Hong Kong.  Sadly, and contrary to the refrain often chanted by pro-democracy march participants over the year, I fear that time may not be on our side. :S
Posted by YTSL at 11:27 PM