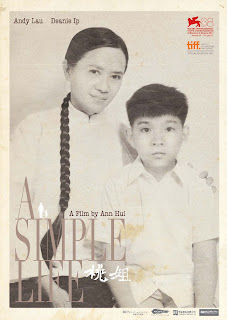 Two Saturdays ago, Hong Kong's A Simple Life won big at the Golden Horse Awards held in Taiwan -- with its helmer, Ann Hui, and two leads, Deanie Ip and Andy Lau, respectively coming away with the Best Director, Actress and Actor prizes. (Although it lost out to Warriors of the Rainbow: Seediq Bale in the Best Feature Film category, it looks to me like the decision to award the Taiwanese historical epic that prize was prompted more by politics than outright merit -- this especially so because it only won one major Golden Horse award compared to the Hong Kong drama's three.)

A few hours before the 2011 Golden Horse Awards ceremony began, I was privileged to be in the audience at a special screening of this critically acclaimed work centering on the relationship between a 40-something man (essayed by Andy Lau) and the amah who had worked for his family for some six decades (portrayed by Deanie Ip) that was screened at the Venice Film Festival and Toronto Film Festival but is due to only get a general release in Hong Kong in 2012. On account of such as its female lead having won the Best Actress prize at this year's Venice Film Festival, I was really looking forward to checking out Ann Hui's latest offering as well as unable to have anything but high expectations for it.

Ahead of my viewing of the film, I also knew that A Simple Life's main characters are based on -- and share the same personal names as -- movie producer Roger Lee (who co-produced this offering with Chan Pui Wah and Ann Hui, and also co-scripted this effort along with Susan Chan) and his family's long-serving amah, a woman who gave her name to Deanie Ip's character in the movie. And upon viewing it, one can't help but feel that this work is Roger Lee's way of paying touching tribute to a woman whose loyalty to, care for and love of Roger Lee's family looked to have been rewarded with her employers coming to consider her very much a part of the family -- and an individual that many of them came to feel considerably indebted to.

Lest it be thought otherwise, however, let me hasten to point out that this is not a film where everything is boringly peachy keen throughout. This is not least because Ann Hui's drama focuses on the period of its female protagonist's life when old age and attendant illnesses make her decide to quit the only life and work that she's known for decades and move away from her employer's home to a home for the aged where she finds new friends but, also, that death is disturbingly near.

Still, this is not to say that A Simple Life is the kind of maudlin depresso-fest that it might have been in less capable hands -- or, even, those of Ann Hui circa the late 1980s and much of the 1990s. For one thing, it has its share of scenes that will make one smile and even laugh out loud. For another, there really is so much warmth evident in much of this work -- and a noticeable generosity in terms of a ready willingness to show the goodness in many people, including many a character whose part may be small yet will stay in the viewer's memory.

Making her first big screen appearance in a decade, Deanie Ip gives the performance of her career as a woman who did not let her humble origins and status get in the way of having a strong sense of self and dignity. In some ways, her character reminds me of the protagonist of Kazuo Ishiguro's The Remains of the Day; only, even though she too never married, she looks to have been far happier about her lot -- in large part because she clearly is appreciated by the people she gave so much of her life to serving (and in a far more spirited and far less obsequious manner throughout).

Although he is not able to completely shake off his superstar mannerisms, Andy Lau gives a much more restrained -- and consequently effective -- performance in A Simple Life than usual. He also deserves the credit for his generosity in allowing Deanie Ip to take center stage for so much of this offering. Furthermore, it is a genuine boon for this film that he and his female co-star really do have the kind of chemistry that comes from having known and worked with each other for decades.

To say the least, then, I came away from viewing this Ann Hui offering feeling that the critical praise and many prestigious awards it has garnered are well deserved. Alternatively put: I was very moved by this film -- and so much so that I ended up crying five times during my viewing of it; with my tears coming from witnessing scenes that touched me in good and happy ways as well as viewing segments that left me sad and, if truth be told, rather fearful as to what old age will invariably bring. In any case, even while I expect the tears to flow again should I view A Simple Life a second time, I really am very much looking forward to doing just that -- for it's a work that's so good that I consider it really worth checking out more than just once! :)

Wonderful review YTSL, I can't wait to see this film and have no doubt I too will be in tears throughout.

Thanks for reading and appreciating. And if you're the kind of viewer who's prone to tears... get your tissues ready when you sit down to watch "A Simple Life"! :b

I normally suggest that people keep their expectations low going into the film -- but it's going to be hard to keep expectations low with this film... since it has been winning so many awards and accolades! :)

I am eager to see it!

I hope you will get much out of viewing the film when you do so. More than BTW, want to also mention that I would have liked to have seen the scriptwriters get awarded a Golden Horse prize too... Ah well, and maybe they'll get something at the Hong Kong Film Awards next year! :)

Great review. It reminds me of a good friend's wife. Her amah worked in her family for decades and was the person who brought her up. She was completely devastated when she left this world. By the way, have your watched the Cable TV programme about an amah giving her entire savings to "her young girl" so that the girl could go to college in the US? The amah is now close 90 and remains the person closest to her young girl (who is now over 40). Another moving story.

Thanks for liking my review and also sharing the story of your good friend's wife's amah.

I haven't watched the Cable TV program that you mentioned but had heard a similar story -- is the program a documentary or based on a real life story?