A third terrible Remembrance Day in a row for Hong Kong 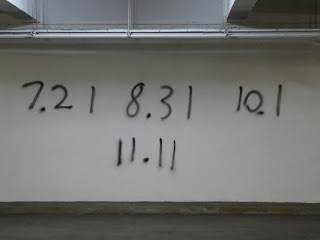 Dates that I now associate with much sadness
For a couple of weeks now, I've been reminded that Remembrance Day was approaching -- thanks, among other things, to the last two Arsenal matches I watched having been preceded by observations of a minute's silence and the sight of people wearing red poppies.  But while there are people who observe Remembrance Day in Hong Kong by remembering the war dead, I must admit to mourning more today what happened in Hong Kong two years ago today, one year ago today and what happened today.

For those who need reminders of what happened two years ago, check out the two Twitter threads created by Razven here and here along with this Tweet by Eileen Chang of the video that captured a cop shooting a protestor at point blank range.  With regards to what happened last year: here's a Tweet by former legislative councillor Dennis Kwok, who's now living in exile in the U.S.A.
And if all that were not already tragic enough, consider that a 31-year-old protestor was sentenced today to five years and nine months imprisonment for chanting slogans.  Ma Chun-man, known as Captain America 2.0 during the 2019 protests -- because, among other things, he would carry around a shield resembling that of the comic book superhero -- was was convicted last month by Stanley Chan, a judge specially chosen by the government to try national security cases, of inciting secession for chanting pro-Hong Kong independence slogans and displaying placards, as well as comments made to reporters.  The same judge now has imposed a sentence on him that is lengthier than any meted out to those found guilty of "rioting" in 2019.
As Samuel Bickett -- who, lest we forget, is a lawyer -- pointed out today, "This sentence is by the same magistrate who told the Defendant at trial that at the time of the offense, “neither you nor a judge could dare say how the law would be implemented.” Real laws are clear in what they prohibit. The [national security law] is, by design, so vague as to be meaningless".  And, lest it not be clear: "By leaving what it actually restricts wide open, the NSL is designed to dismantle rule of law, not buttress it. It is less a law than an anti-law, a declaration that laws are irrelevant."
Something else that really needs to be made clear is that, as Ma Chun-man's lawyer pointed out in court, Ma did not commit violent acts -- and, indeed, was not accused of having committed any violent acts.  But in convicting him, the he judge said it was irrelevant whether Ma's acts had been peaceful or not.
Suffice to say that many people would beg to differ.  In a statement issued by Amnesty International, the NGO's Deputy Secretary General, Kyle Ward, asserted that Ma's conviction and sentencing "clearly shows that restrictions on the right to freedom of expression in Hong Kong are dangerously disproportionate. The two verdicts handed down in national security law cases have not paid due regard to the human rights safeguards the Hong Kong authorities claim exist in the law."
The statement goes on to point out the following: "The Hong Kong authorities’ sweeping definition of “national security”, which follows that of mainland China, has been used arbitrarily as a pretext to restrict the human rights to freedom of expression, peaceful assembly, association, fair trial and liberty, as well as to repress dissent and political opposition.  Between 1 July 2020 and October 2021, police arrested or ordered the arrest of at least 154 people in relation to the NSL. As of October 2021, at least 82 people have been formally charged, of whom 59 are presently in pretrial detention."
More than incidentally, today also saw the long delayed M+ museum hold its opening party.  As Goose Lee Tweeted, "This world-class museum has been years in the making and cause for much excitement — until it became mired in the National Security Law that was introduced last year."  After all, in the eyes of many, you can't really have a world class art museum in a place where censorship is most definitely a thing.
Here's Ai Weiwei on the subject: ""When you have a museum which cannot or is incapable of defending its own integrity about freedom of speech, then that raises a question. And certainly the museum cannot perform well in terms of contemporary culture." Which is why, as far as many Hong Kongers are concerned, M+ is pretty much dead on arrival and I -- who, I think it's fair to say, tends to be much more of a museophile than most -- can't feel much enthusiasm about paying this it a visit (and that's even without taking into consideration the privacy concerns that a visit there can engender!).
Posted by YTSL at 10:44 PM

I bet there all sort of museums. Maybe when you have time you can show us some museums there.
Coffee is on and stay safe

Please use the search button on this blog to find my old blog posts about museums (and museum exhibitions) in Hong Kong like the following:-
https://webs-of-significance.blogspot.com/2010/09/evergreen-classic-at-hong-kong-museum.html

But, sorry, I won't be visiting any Hong Kong museums for the foreseeable future -- not when, among other things, they are requiring the use of the so-called LeaveHomeSafe app to enter them.

Uncertain about other museums, but when the Arts Museum in TST re-opened a few years ago (before all this), it require a security check with X-Ray machine (just like the metro rail in Guangzhou\Shenzhen started two decades ago) I stopped going there since then.

Now that freaking app is changing my ways to go to wet markets.......

I haven't been to the HK Art Museum since it re-opened. Is the X-ray machine at security also like what one encounters at airports?

Re that app: oh no re your needing to use it for entry into your (neighborhood) wet markets! BTW, I haven't used it yet.

I have not use the app to go to Government wet markets yet. Just those along the streets, or those located in public estates but had been sold to VCs. But that went a long way as the best fish markets in Apleichau & Aberdeen are all inside Government wet markets. Quite a few other districts too (say Kennedy Town, SSP, Yeung Uk Road, Taipo.....) Each had had its own characteristics. Dang.

Re X-ray security checks, yes, similar to those in used at HKG and any other BIG airports, with a conveyer belt. I guess sooner or later they would start using one of those as seen in the original Total Recall movie, if they could get an excuse or if they could obtain such equipment. I believe the US had a few of these already. But then, they may have to build their own copy-kat version.

A friend of me told me that the market stalls outside the government complex in Sham Shui Po have been doing roaring business compared to those located within it. I can imagine this being the case too in similar places.

As for those X-ray security checks at the Hong Kong Museum of Art: people who don't know Hong Kong well might think this is a reasonable arrangement; but those of us who know that Hong Kong isn't the crime-ridden and terror-threatened place that the authorities seem to want people to believe will know that these kind of measures are excessive and uncalled for.

From my previous experiance in Guangzhou and Shenzhen, the inter-city rail already has X-Ray security checks for about two decades. The metro rail (equivelent to our MTR) within Guangzhou also has such X-Ray machines for security check. Passengers must put their bags (fanny packs, think overcoats, etc) through the system before boarding.

Think of this kind of security measure being enforced in town........... I just don't know what are they afraid of.

Did you see the piece in The Standard today in which the Chinese Communist Party made claims in its recent "historical resolution" that "the difficult times are now past" in Hong Kong?

If so, it's like you wrote above: "I just don't know what are they afraid of"!

I did not view that piece. But commies always make fancy claims over the years. Some of them are merely empty slogans. Resolution my ass. Maybe 100 years later historical become hysterical when the then historians review the current time frame.