Culture and censorship at M+ 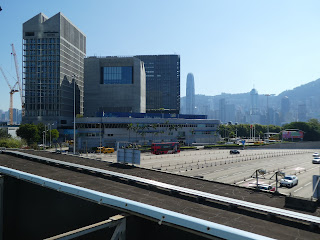 The closest I may ever get to M+
For more years than I care to remember, I've been reading about the West Kowloon Cultural District and the mooted jewel of its crown, a world-class museum of visual culture known as M+.  I remember how excited I was to get a taste of what was (supposed) to come six years ago by way of an exhibition at Artistree of works from the M+ Sigg Collection donated by Swiss businessman, diplomat and art collector Uli Sigg to the Hong Kong museum.
But with each year that its opening was delayed, my enthusiasim to check it out waned; and this particularly after China imposed a National Security Law on Hong Kong on June 30th, 2020.  Thus it was that despite its having finally opened to the public late last year (a few weeks after the opposition-less Legislative Council passed amendments to the film censorship law to allow film censorship on the basis of national security considerations), I've yet to feel compelled to pay a visit to M+.
To be fair, this museum of 20th and 21st century visual culture did receive a number of positive reviews, including from Ilaria Maria Sala, a Hong Kong-based culture writer who's openly pro-democracy.  Writing in The Art Newspaper, she noted, among other things, that: "In scale and ambition, M+ possesses all the qualities needed to take its place with other major art museums around the world, while contributing different points of departure by asserting and amplifying Asian voices and concerns."
In her review's concluding paragraph, Sala stated that "In M+, Hong Kong has gained a truly magnificent museum, whose existence manages to remind the more inward-looking members of the political establishment that Hong Kong is, and has always been, a place of encounters and multiple cultural influences."  She also expressed that hope that: "Its prestige might help it to navigate these troubled times—in the hope that greater openness will not be seen as a threat, whether in Hong Kong or in China."
Alas, I think that upon its reopening (after a temporary closure due to social distancing regulations being tightened as a result of Hong Kong's fifth Covid wave) yesterday, that hope looks to have been dashed.  For it was found that three politically charged works have been pulled from display, notably Chinese artist Wang Xingwei's New Beijing, a work which references a June 1989 photograph that Hong Kong photographer Liu Heung-shing took of two injured, bloodied young men being transported on a bicycle cart to a hospital from Tiananmen Square (that, more than incidentally, also is part of the M+ Sigg Collection and was in display at Artistree back in 2016 but doesn't seem to be on display at the M+ itself).
The M+ authorities have responded to enquiries on this matter by the Hong Kong Free Press by stating that " it had always planned to rotate artworks. Nine pieces of the 200 it planned to rotate were swapped out before this week’s reopening “in particular those which are in greater need for conservation"".  Color me skeptical though.  We are talking after all, about an institution that has not even put online -- never mind public display -- Ai Weiwei's photograph of him raising his middle finger at Tiananmen Square (which also happens to be part of its collection).
As someone who is an avowed museophile, this all is very sad and upsetting.  And maybe there are people who will continue to support M+ because there "is still good work on offer" there.  (Note though that the quoted Tweet was made before the revelation of M+'s latest action.)  On the other hand, there are many folks out there who feel, like a friend succinctly put it some months back, that "M+ was dead on arrival".
And if you think that's not cynical enough, consider this take shared yesterday by a member of the HK Twitterverse about the news of the removal of Wang Xingwei's New Beijing: "It's typical of what I expected of them. Get the [international] cred for displaying 1 or 2 "provocative" [pieces] at [the] opening, then silently disappeared later. Blah blah intl world class blah blah but management by the likes of Henry [Tang and] Bernard [Chan] can't or won't defend artistic freedom in the end"!
Posted by YTSL at 6:38 PM

I remember getting a friend to drive a small group of my ex-colleagues to the Getty Center some 22 years ago when I was stationed in Los Angeles. We did not have to make appointments, just drive\walk in. But that changed after 9/11, I guess. Checked the Getty's homepage yesterday and found now visitors there has to make appointments before going there.

Managed to view a Monet or two there during the short visit. Should have visited it more often when i was there, but I do not drive in the first place........