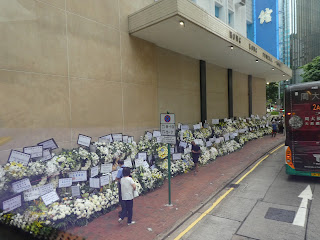 Flowers for Stanley Ho's funeral;
will there be any at Hong Kong's? 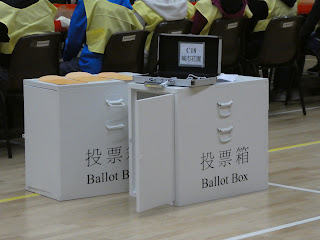 Okay, Hong Kong may not be dead yet but who knows
when ballot boxes like these will get used again?


Earlier today came word that Carrie Lam -- who a recent Hong Kong Public Opinion Research Institute (PORI) poll found to have an "approval rate [of] 18%, disapproval rate 72%, giving a net popularity of negative 53 percentage points, registering a drop of 7 percentage points since half a month ago, but the change is within the sampling error" --  was going to hold a press conference at 6pm.  Pretty every much everyone knew it was to announce the postponement of the Legislative Council elections -- something the powers that be had been telegraphing this move for days now (see my mentions of this back on July 20th and again on July 27th).  And so it came to pass.


To be sure, there are some people who might have thought that after disqualifying 12 democratic camp hopefuls from taking part in the Legislative Council elections yesterday, the authorities felt confident enough that the pro-government/Beijing faction would prevail in the coming elections.  And this on top of the legislature already being fixed to favor the establishment by way of being made up of representatives of functional constituencies as well as geographical ones.


But I guess the Hong Kong government, its acolytes and/or its bosses no longer are under illusions after last November's District Council elections revealed how widespread the dissatisfaction with "the establishment" is -- and that the (previously) much vaunted "silent majority" actually favors the pro-democracy camp!  Put another way: the powers that be may have lots of power and tools to oppress people but they also know now that they have not won the hearts and minds of the majority of voters (and, for that matter, Hong Kongers in general).  And I honestly think that they're pretty fearful as a result.


As to the timing of the announcement that the Legislative Council polls will be postponed for a year (at the very least):  I can't help but think that they wanted to wait to mark the one month anniversary of the implementation of China's security law for Hong Kong with a bang -- to cap off what's been quite the whirlwind month of oppressive activity (which a number of sources, including the folks over at China Uncensored and a number of academics, believe are taking place because Xi Jinping's window of opportunity might be smaller than he would like).


And no, I don't think there's anyone with a brain out there who is buying the suggestion that this postponement has anything to do with anti-Wuhan coronavirus measures (even though the third wave is indeed currently battling Hong Kong, with 121 new cases reported today and the death toll now up to 27).  After all, there's so much Carrie Lam could have done to prevent the pandemic from worsening -- including tightening quarantine and testing restrictions, if not outright closing the border -- but she has damned herself (and Hong Kong) by opting not to do so!

Amidst all this, there's a piece of news that might got more attention if it had broke on a slower news day: the announcement by Hong Kong's top public prosecutor that he's stepping down, citing differences with Justice Secretary Teresa Cheng and being sidelined from cases under the new China-imposed national security legislation.  The full text of David Leung's  internal email to a colleague has been released and people are debating whether he quit because his conscience was pricking him or because of office politics.  But what is clear is that not everyone has been reading from the same page over in the government camp: and I don't (just) mean medical experts vis a vis the goverment officials overseeing health matters  (including the woman with a reputation for being quite the control freak)!
Posted by YTSL at 10:39 PM