Mourning, not celebrating, on the 70th anniversary of Communist China's coming into being 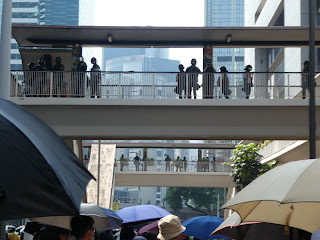 Riot police literally looking down -- and, I'm sure, figuratively
too -- at protesters marching below past their perch 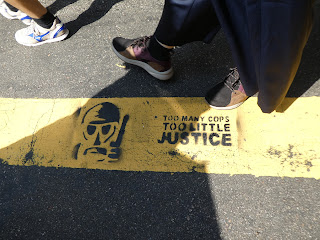 What a whole lot of Hong Kongers believe 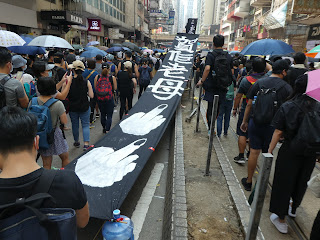 Celebrate China's National Day?  The mood's more along
the lines of Celebrate your mother in Hong Kong!


For a number of years now, the Civil Human Rights Front (CHRF) has been organizing protest marches on July 1st and October 1st.  Known for its ability to attract a large number of participants for its protest events, it also has a deserved reputation for organizing events favored by non-violent protesters.  Despite all this, the Hong Kong police refused to grant the CHRF a Letter of No Objection for the protest march it had planned for the 70th anniversary of the establishment of the People's Republic of China.


But if the local constabulary thought that this meant that no major protests would be taking place on what's looked upon as a day of mourning -- not celebration -- for many Hong Kongers, they were proved wrong many times over once again.  For one thing, a quartet of pro-democracy activists stepped forward to organize an October 1st march whose route closely followed that proposed by the CHRF -- and decided that they would not bother to apply for a Letter of No Objection from the police for it.  In addition, in anticipation of the police rejecting the CHRF's proposal for October 1st, "National Calamity Day" protests were scheduled to take place in six other locales in Hong Kong.

Although the authorities did their best to scare people into not turning out and making it difficult for them to get to protest locations, tens -- if not hundreds -- of thousands of people showed up at the appointed times and places this afternoon to show that they were not in a celebratory mood this October 1st.  The march from Causeway Bay to Central along the route traditionally opted for by the CHRF attracted the largest number of participants.  It also appeared to be the most peaceful of today's protests, with its offical conclusion having been announced by the organizers before things took a violent turn on Hong Kong Island in the manner of earlier developments elsewhere, including Wong Tai Sin, Tuen Mun, Tsuen Wan and Sha Tin.


Inevitably, many more cannisters of tear gas were fired today in various parts of Hong Kong, the water cannon got wheeled out for use on protesters once more, this summer's protester arrest numbers increased by more than a hundred today, etc.  Also predictably, but sadly all the same, the level of violence escalated some more today -- to the extent that a number of media outlets (including the Nikkei Asian Review, and Radio Television Hong Kong's English language team) decided to take their reporters off the streets for the day.


Lest it not be apparent that a large part of the violence emanates from the police rather than protesters: the headline news out of Hong Kong today is that a schoolboy protester had live rounds shot into his chest by a cop in Tsuen Wan this afternoon.  Ironically, just last week, Chief Executive In Name Only -- who wasn't even in Hong Kong today -- Carrie Lam took it upon herself to declare that it's remarkable that no one had died yet in this summer's protests (though, of course, she was not taking into account the protester suicides that have taken place).  But the way the police are carrying on, it really is seeming more inevitable by the day and week that there will be protester deaths on their hands (soon), if there hasn't been already.

Actually, considering that the live rounds that lodged themselves into the Tsuen Wan schoolboy were not the only ones fired this afternoon, it truly is a miracle that no one was killed by the police today.  Just a few days ago, I was lamenting to a friend that, whereas prior to this summer, my main worry when protesting was that I'd be pepper sprayed and beaten with batons by the police, now I worried that I'd get tear gassed when walking about in Hong Kong as well as during an actual protest.  After today though, the potential for greater harm wreaked by the Hong Kong police has come about as a result the shooting of actual live rounds threatening to be the norm -- like the firing of cannisters of tear gas, rubber bullets and sponge grenades more or less.  Which gives Hong Kongers one more reason to mourn on this anniversary given such great import -- and celebrated -- by Beijing.
Posted by YTSL at 11:59 PM

I anticipated MTR issues today and started early by bus going back to work. While travaling on the uppder deck I found the out-sourced city cleaners was starting early too.

The condition of Causeway Road, Yee Woo Street and sections of Hennessy Road had been terrible. All those waste papers...... (the after life money the throng had been throwing during the match). The clearers had been sweaping up the garbage that had been left behind. I am only talking about the roads & pagements. I think some of them are still playing catch up by now.

King's Road is having a better condition, or it had already been cleaned even earlier.

We were lucky there was no heavy rain or the mess would be flushed down the drainage system and clotted it up, causing serious flooding.

Watching the following Sky News video, one understands better why the protesters put up the blockades that they do... and how they get turned into debris.

Ugh, Admiralty looked much worse than Casuebay Bay. Looked like the folks had dug up the road to me. I have seen the burning bikes in Wong Tai Sin live though.

Couldn't watch these news for too long, however. Feels bad about it and would just affect the already miserable working day.

I stayed up until 2am on Tuesday, partly because I wanted news that all my friends were home before I turned in for the night. Of course I couldn't help following the news in that time and had nightmares after I went to sleep that night.

Went to bed early last night -- just after things kicked off again in Tsuen Wan, etc. -- but still had nightmares. I have a feeling I'll have nightmares again tonight after watching what's been happening in Tai Koo Shing. At the very least, am reconsidering my plan to go grocery shopping in Tai Koo Shing tomorrow... :(

Do you intend to go to Aeon or Apita? If going to Apita, you may get off around Quary Bay MTR station, go through Tai Koo Place then go into Taikoo Shing away from Tai Koo Station. That should stay away from the potential conflict site last night.

Not much luck if you are going to Aeon as it is closer, but still on the other side.

Either way I would suggest to go by bus or tram. This way you should be able to look ahead. If there are traffic jams or trouble, you can call it quit. Getting off is easier then being in the MTR. The disadvantage in the Quarry Bay area is that you do not have too many side streets to duck into (actually just one parallel street to King's Road on the sea side between the Model Estate and Taikoo Place).

Or, you could take a walk from North Point going along the shore (literally) until you reach the promanade, then go cross the foot bridge to Quarry Bay Park and into Taikoo Shing, then get a taxi back when you are done.

I usually shop more at Aeon than Apita but decided to give both those places a miss today and stayed closer to home.

You are wise not to go. I couldn't get off work until sometime after 1930 hrs and opted for the Ferry to Sai Wan Ho, then walk along the middle of Tai Koo Shing towards North Point. I walked by City Plaza at a bit after 2015 hrs. All shops are already closed (including Apita) except those foodies with their own street ftonts, which are business as usual.

It was bad luck as when I go to the Bus Terminus in North Point, City Bus had already stopped the route 41a. I have to duck back to MTR while CWB is already closed. I'm just hope for a while.

Protesting damage finally come to Aberdeen tonight. On the other hand the shopping centre in South Horizons closed its doors at 2000 hrs earlier.

I decided to watch some DVDs before going to bed. No mood staring at the news for the unrests.

A suggestion, if I may. If your friend allows, go to Peng Chau and stay for a few days. Tha should help.

I'm glad you managed to get back home safely today. I hope the same is true for all of my friends in Hong Kong too.

P.S. Thanks for the suggestion but I rather be closer to my own place during the next few days.

Now I am a bit worried about colleagues running B and C Shifts in the office.

It's going to be a very long night tonight.

Another suggestion. We cannot control what is happening out there. Give yourself some distractions.

Update: the entire MTR system has now been shut down. I feel for your colleagues -- and for Hong Kong in general. I agree we cannot control what's happening out there but we also should feel that we aren't completely unable to have an effect on anything.

Re giving oneself distractions: what happened to your DVD viewing this evening? ;)

You take care. And thanks again for caring.

Couldn't make up my mind which disc to play, thus swapped to some Spanish Guitar CDs instead. Too loud for other stuffs at this hours anyway. I still have lots of novels to read.

Listening to 'A Spanish Portrait' by guitarist Luigi Attademo

You be safe down in the Southern District. I saw that tear gas was fired in Aberdeen tonight along with Sha Tin, Tuen Mun, and poor Wong Tai Sin and Tsuen Wan.

And now it's past midnight and that ridiculous regulation has actually come into effect. I'm not a religious person normally but even I am wanting to call on God to help Hong Kong now. :(

As for today, at least that South Park apology could lessen the mood quite a bit. I nearly choked on my coffee.......

Glad you saw "South Park"'s 300th episode too! And yes, it did lighten the mood and perk up the spirit somewhat!