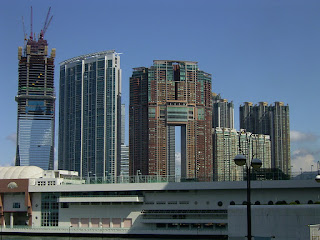 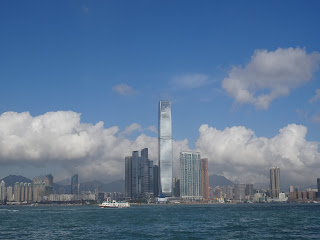 A photo taken a few months ago, with the ICC dominating
the landscape, as is to be expected of Hong Kong's tallest building ;b


Back on April 29th, 2007, I announced on this blog that I'd be moving to Hong Kong.  Two days later, I arrived in the Big Lychee.  And for those who're calculating: yes, this means that today sees me celebrating my ninth anniversary of living in Hong Kong!  In honor of reaching that milestone, here's looking back and reflecting on nine changes and/or developments that I've noticed have taken place in "Asia's World City" since May 1st, 2007 (in no particular order, and for better or worse):-


1) Changes to the skyline on the Kowloon side of Victoria Harbour: The International Finance Center (IFC)'s 88-storey-high Tower 2 over in Central was Hong Kong's tallest building when I arrived in the Big Lychee nine years ago but it's now been surpassed in height by the International Commerce Centre (ICC) over in West Kowloon.  Interestingly, while I've yet to be on an upper floor of the IFC (or, for that matter, the Bank of China Building -- another past "Hong Kong's tallest building" title holder), I've been able to do so -- and consequently enjoyed some stellar views -- at the ICC courtesy of fine dining establishments such as the Hong Kong branch of Ryugin and Tin Lung Heen being located there!


2) Changes to the skyline on the Hong Kong Island side of Victoria Harbour: Construction sites continue to surround the area around the ICC while over the past nine years, we've seen such as the demolition of the building in Central which used to house the Ritz Carlton Hotel and the relocation of the Wan Chai ferry pier on the other side of Victoria Harbour.  By far the most notable change to the waterfront area as far as most people are concerned though is erection on the Tamar site of the Hong Kong Central Government Complex.  First occupied in 2011, its buildings' shapes became very familiar to many people, including me, as a result of a certain Occupy initiative and Umbrella Movement, even though many of us "only" spent significant amounts of time on the streets nearby rather than were admitted into them...


3) A more politicized Hong Kong: I've long thought it was a fallacy (especially in light of there being annual commemorations on June 4th and rallies on July 1st) but before the Umbrella Movement came into being, I did hear various people opine on more than one occasion that Hong Kong people are only interested in making money.  While I would agree that money is important to many Hong Kongers, I think that lots of people here have come to realize that the economy is affected by politics (and vice versa).  More importantly, they also have come to realize that political awareness is not necessarily a bad thing -- and that political activism is needed to help safeguard the kind of way of life, and Hong Kong, that one wants to have (and/or remain).


4) One country, two systems -- more so than ever psychologically: Even as there are fears that Hong Kong's society and political culture will become more and more like totalitarian, Communist-ruled Mainland China, I am increasingly seeing people determined -- or, at the very least, wishing -- that Hong Kong will never become just another Chinese city.  Actually, around the time of the 2008 Olympics (which largely took place in Beijing but also saw a segment taking place in Hong Kong), I did feel that many Hong Kongers considered themselves to (also) be Chinese.  But that time -- and opportunity for the administration over in Beijing to build on -- appears to have truly come and gone.


5) Putonghua/Mandarin more than English but Cantonese above all: Early on after my move to Hong Kong, the general impression I had was that many Hong Kong residents were more comfortable speaking English than Putonghua/Mandarin.  These days, however, I feel that many more Hong Kong residents are more able to converse in Putonghua/Mandarin than English -- and this especially so among the younger generation.  At the same time, given a choice, pretty much every native Hong Konger would speak Cantonese -- and, in some cases, only Cantonese; this even among those who're actually ethnically Chiu Chow/Teochew, Hakka and so forth!


6) Goodbye KCR, hello MTR's East and West Rail Lines: On a less political note: I have a friend who'd give people an idea of how long he has been in Hong Kong by telling them that he moved here before the Cross-Harbour Tunnel existed.  I wonder whether in years to come, people will similarly gasp when I tell them that when I moved to Hong Kong, what is now the MTR's East Rail Line used to be known as the Kowloon-Canton Railway (popularly abbreviated to "KCR").  And should anyone wonder: that change took place in December 2007; and that same day, the KCR West Rail line also came to be known as the MTR's West Rail Line!


7) Further MTR expansions: In addition to gobbling up KCR lines, the MTR also has extended its services by building and connecting to more MTR stations.  Among the MTR stations that have come into being in the past nine years have been that for Lohas Park, Austin, Sai Ying Pun, HKU and Kennedy Town.  And while I've not yet set foot for that which services the mass residential development over in Tseung Kwan O, I've been happily making use of those MTR stations west of Sheung Wan to get to know northwestern Hong Kong Island better!

8) Photography now allowed(!): The first time that I visited a number of visually interesting looking Chinese temples in different parts of Hong Kong, I was shocked to find that no photography was allowed in them.  This was something that I found rather strange -- since photography was allowed in equivalent temples in Malaysia, Taipei and even close by in Macau -- and ascribed to some particularly localized superstition or belief here in Hong Kong.  But for whatever reason, somewhere along the line, the no photography ban has been lifted by the Chinese Temples Committee that operates and manages the likes of Tai Hang's Lin Fa Kung and Joss House Bay's Tai Miu -- and I, for one, am ever so delighted (and feel liberated) by this action!

9) A city of where smartphones abound: As amazing as it may seem to some, I didn't have a mobile phone until I moved back to Asia in 2003 -- and to this day, I still do not own a smartphone and actually still do not feel a need to have one.  I realize that this puts me in a distinct minority of people here in Hong Kong, where much of the populace has embraced the smartphone revolution, and there are people with more than one smartphone who think nothing of changing their phones every other year, if not annually.  But truly, I want to say this to people: in this city where smartphones abound, one really still can get by without a smartphone -- and fairly easily too! ;)
Posted by YTSL at 11:54 PM

Our town of Bonners Ferry changes very slowly. Sometime that's good and not so good. We're getting more and more empty store fronts.

Wow, I just Googled your town and read on its Wikipedia entry that its population as of 2010 was just 2,543! That's quite the contrast from Hong Kong! Do you think the town's getting even smaller? Your empty store fronts remarks makes me think so...

Just go buy a smart phone. I know you won't believe me but in three days you will wonder why it took you so long. Just being stubborn and old fashioned!

I don't want to buy a new phone until my current phone dies -- and the way things are going, I still am not 100% convinced that I should buy a smartphone when that happens. Among other things, I have a better camera than those on smartphones, I prefer actual maps to Googlemap, already own a pedometer and would never ever watch a movie on a smartphone's small screen! Oh, and smartphones seem to actually make people communicate with friends less, not more... ;S

This entry includes interesting and significant changes. You must have a super memory to recall these urban changes so thoroughly and must keep a journal to document your observations of life in this city (well, I guess this blog is a form of personal journal)...

As a tourist, one of my most memorable experiences in Hong Kong took place in March of 1989, hiking in the hills above the Po Lin Monastery. The massive seated Buddha was under construction and it was a surreal sight indeed to see just the bare metal skeleton of the seated figure below, dwarfing the onlookers around it.

I think (my) memory is a funny thing. I'm sometimes amazed myself at what I can remember but also shocked by what I forget/have forgotten. And one reasons I blog is to help me remember some of the things that I do want to remember (e.g., my feelings re certain movies I've seen!)

Wow re your having seen the Big Buddha when it was under construction -- now that's a sight that would be hard to forget, right? :b