Cool camouflaged critters spotted along Section 12 of the Lantau Trail :) 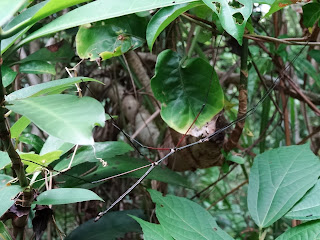 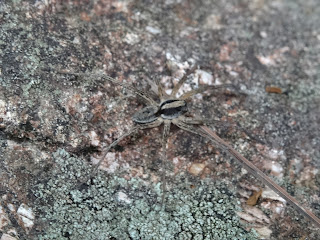 This spider is way smaller and better camouflaged
than the giant golden orb weavers ;b 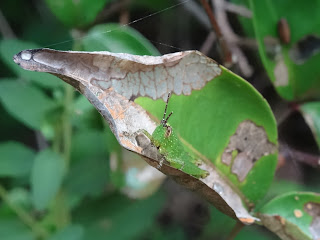 Hong Kong's biological diversity is such that eight years on,
I still am spotting species of grasshoppers I previously had not seen! :O

This afternoon, I went on a hike with two friends from Mui Wo to Pui O along Section 12 of the Lantau Trail.  Although I've gone on this route twice before, it's one of those trails I find pretty enjoyable to hike on and consequently worth going on again and again; this not least because there often are interesting critter spottings to be made along the way.

On today's hike, within the first half an hour of the approximately four hour hike (which is one hour longer than official estimates -- but to be fair, we were hiking on a hot and humid day that was far from breezy for the most part!), I caught sight of an unusually colored stick insect hanging from a tree; albeit one that was more conventional shaped than the green critter I saw up on Victoria Peak two Sundays ago!

As I told the two friends with me, I actually get a sense of achievement from being able to spot critters like that well camouflaged insect while out hiking, and look upon my increasing ability to do so as a good indication of my increasing knowledge of nature.  And I can recall that in the first year or so that I went hiking in Hong Kong, I was far less able to do this -- and consequently tended, instead, to focus my attention on grand views, brightly colored flowers and cool geological formations.

To judge from the difficulty that the friend who was hiking with me for the first time today in seeing the creatures about us, it really is something that needs to come with practice (along with a keen eye)!  And even after you spot the critters, your camera may refuse to do so -- so that try as you might, you won't be able to get it to clearly focus to take a sharp photo!

As I explained to this friend, there's a reason why he had difficulty spotting the critters (and my camera sometimes refused to focus on them): and that is that biology and evolution has effectively designed them to blend in with their surroundings!  So when they are in their natural environment, they really can be hard to see -- and when you succeed in doing so, it really can feel so very cool indeed! ;b
Posted by YTSL at 10:58 PM

I remember seeing something very astonished in Pui O after in the middle of a hike. I just went through Section 12 and was on my way back to Mui Wo along the Highway. While walking pass a pub/bar with an open air portion, I saw an adult water buffalo standing among the patrons.

The patrons were keeping a distance, but still, the buffalo was just a few steps away. I did not take any pictures as I fear my sudden stop and pointing something at the buffalo might provoke it.

I should have walked to the other side of the road and use my zoom lens to do it.....

One's pretty much guaranteed to see some buffalo while in the vicinity of Pui O. Haven't seen one at a bar though -- but have seen plenty on Lantau beaches, including those at Cheung Sha and Mui Wo!

The buffalo (and cows) in Lantau seem really placide and used to humans. But while many humans are used to them, I worry sometimes when seeing freaked out tourists yelling at/in close vicinity to those animals...like in one instance I witnessed yesterday. :S

Those tourists should have just stand a few steps away or back away slowly. You could not argue with a water buffalo weighing over 1000 pounds. If they happen to freak the buffalo or cow out they are just putting themselves and everybody around them in danger.

I read a last year that a twenty-ish male tourist tried to ride a water buffalo or a cow in Silvermine Bay, which ended up starting a rampage. The poor animal was scared, thrown the guy down and started chasing the guy and everyone nearby away. Fortunately nobody was hurt seriously.

I pity those silly people. One should not even touch or provoke pets of much smaller sizes own by someone, not to mention animal that could simply bump you off by their mass.

Love the critter in your third photo....would make a cute plush toy.

Agreed the tourists. Alas, I think there are a lot of people who are not used to being close to actual, real-life animals, never mind wild ones, and do not know how to behave appropriately around them!

The plush toy would have to be a good deal bigger in size than the actual critter though -- it's really tiny! ;b