The scenic Atlantic Road, including the (in)famous Storseisundet Bridge 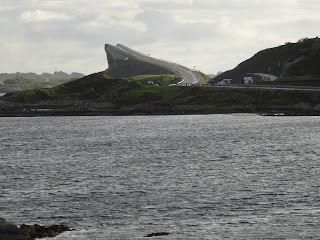 Would you go on that bridge? :O 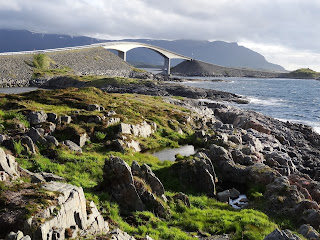 The Storseisundet Bridge viewed from a less scary angle 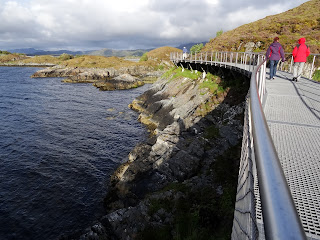 Some members of my group were put off going along
this nearby walkway -- not by fear but, instead,
the cold winds blowing that afternoon! ;b

As I outlined in a previous blog post, a voyage along a Hurtigruten ship is not a conventional cruise.  And despite such as the wonderful food served on board, it's not considered a luxury or luxurious cruise and actually is looked upon by many as a no-frills affair since there's next to nothing as far as organized activities on the ship are concerned; with light-hearted crossing the Arctic Circle ceremonies, daily briefings (complete with video) which my mother made a point to attend (but not me!) and the "live" broadcast of such as the Norway vs Germany Women's 2015 World Cup Finals match and a Swedish royal wedding just not cutting it for those expecting such as on-board casinos and variety shows!


Instead, this cruise line's main selling points are the often stunning scenery on view pretty much throughout the voyage, the many stops each day that its ships make (and the related opportunities to go on shore), and the varied shore excursions that don't come with the general package but which pretty much every passenger goes on at least once during their trip.


The first of the shore excursions offered by Hurtigruten that I went on was on was absolutely fantastic, seeing as it not only allowed me to see Geiranger Fjord from land (rather than just the water) and also introduced me to the wonders along the "Golden Route".  If truth be told, I was far less impressed by the Kirkenes "Russian Border" excursion since we didn't get as close to the Norwegian-Russian border than I expected that we would, and that played some part in my disinclination to go on more shore excursions than the three in total that I ended up opting for.

As it turned out though, I'm definitely pleased that my mother and I did go on one more shore excursion after that -- since the Atlantic Road excursion yielded a number of visual highlights, including the sight of double rainbows in the sky (which I sadly was unable to photograph) and the two churches at Kvernes (which I happily managed to snap photos of -- both inside as well as outside of them).

Also, although I personally think it a bit of a stretch for it to be billed the world's best road trip (as was the case in a 2006 piece in The Guardian) since it's only around 8.3 kilometers in length, the journey along the National Tourist Route-rated Atlantic Road between Kristiansund and Molde did offer up scenery so beautiful that I found myself wishing that we could be on this route -- which is built on several islands and skerries, and includes eight connecting bridges -- for quite a bit longer!

Speaking of length: The longest of these bridges is also the best known of them -- having appeared in numerous car commercials (such as this one) and numerous Youtube videos.  Our first glimpse of the 260-meter-long, 23-meter-high Storseisundet Bridge got some people gasping out loud because what we saw looked like it was part of a scary rollercoaster ride rather than a bona fide road on which vehicles go on!  So it was a very good thing indeed that close to it is a walkway where one can see this bridge from other angles and realize that it's only an optical illusion that makes it seem so terrifying.


That same walkway winds 360 degrees around a small knoll and offers up breathtakingly beautiful views of the surrounding land and sea.  But while the sun was out doing its bit to make the scenery even more attractive, the wind was doing what it could to make it bone-chillingly cold and put off some people (including my mother but also others from colder climes, such as a Philadelphia couple!) from completing the walking circuit!

Still, at least, pretty much everyone in my party did manage get far enough along the way to see that the Storseisundet Bridge is not a "bridge to nowhere" or anything like that!  So there was no one doing such as refusing to cross it and go along the rest of the Atlantic Road that would take us to Molde, where we'd meet up once more with the MS Richard With and the people on board who, as it transpired, had had to endure a few hours of bad weather -- and, in some cases, sea sickness -- while those of us on the shore excursion had been on terra firma!
Posted by YTSL at 11:59 PM

Whaaaaaaaa an optical illusion!! I would love to drive my VW up and over a bridge that looked like that...and at a high speed too. The walk looks like fun...my speed for a walk too. Who cares about the cold wind...put n more layers...

Going on the bridge was anticlimactic after seeing the way it looked from certain angles. The walk though -- it was breathtaking, in more than one way. Also, because it was so cold, I found myself speedwalking more than I normally would in a place with such stunning views. ;S

The middle photo is a good composition that really appeals to me. Between the foreground rocks, water, background mountains and clouds - is the bridge, which resembles a fossil or a modern sculpture of a prehistoric creature (which looks different, depending on the angle from which you view it). The bridge seems to blend into the natural world which surrounds it. A view to remember which compares favorarably to your Japan photos of the network of bridges seen from Azumaya Viewpoint.

I'm glad you like the middle photo. I chose that one to put up rather than one taken from a similiar but "shallower" angle.

And oh wow re your remembering the Azumaya Viewpoint! I had to do a search to figure out what you were referring to! ;b