Fun in Tromso on a memorable day in the cold Arctic! (Photo-essay)

The day that King Neptune came on board the MS Richard With was a memorable one --and not only because of the Crossing the Arctic Circle ceremony took place that morning. Among other things, as I was walking out of the ship's restaurant after breakfast, I spotted a fin sticking out of the water like a shark's and upon closer scrutiny, realized that it belonged to one of three whales swimming just a few meters away from the ship!

Try as I might though, I was unable to get good photographic records of these spottings.  On the other hand, I think I got some fine -- and fun! -- pictures to remember Puppet Ponyo and my visit to the university town of Tromso later that day... ;b 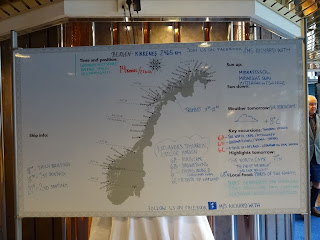 This, our second day in the Arctic, also was the second day
in which we experienced the midnight sun 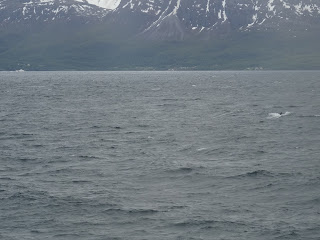 Rather than being super sunny, however, it was on the gray side
that day -- as this photo (which has one whale fin in it) shows! ;S 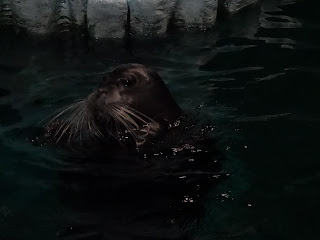 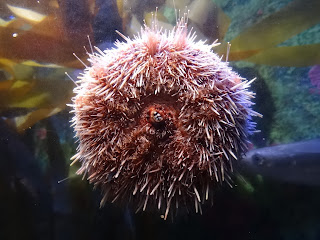 And this is what a sea urchin (of uni fame) looks like! :b 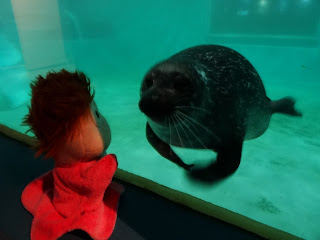 Shades of the curious fish at Seoul's COEX Aquarium:
Methinks this sea lion was besotted by Puppet Ponyo! :D 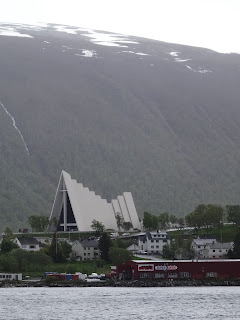 Because it was super cold and windy in Tromso that day, I decided
against walking across the bridge to visit the Arctic Cathedral 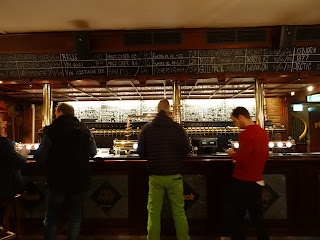 Instead, I spent some time in the warm confines of
the Olhallen Brewpub which has an amazing
56 beers (all Norwegian microbrews) on tap! 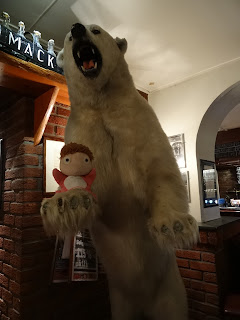 I wish I'd been able to spend more time in Tromso's oldest pub
(and sample more of its beers) than I did -- but, hey,
at least Puppet Ponyo and I did have some fun while there! ;b
Posted by YTSL at 11:48 PM

We sailed on the MS Richard With from Bergen to Tromsø sailing Wednesday 10 December 2014 arriving Tromsø Sunday the 14th . Were you on this cruise by chance or another? Reply at shsch1@gmail.com

Thanks for posting your email address but I'll reply here: we weren't on the same cruise. I went just last month! Hope you had a good time but to be honest: I can't imagine wanting to experience Norway's winters after experiencing its cold spring! :)

A photo-essay which does depict a "memorable...day in the Arctic." Continuing with this archaic English, "Methinks" you've delivered two more classic Puppet Ponyo poses, one which is a companion photo to the Coex Aquarium, the other - even though it is a stuffed bear, still looks like a frightening character from your Nordic odyssey.

I have to say I *REALLY* love the photo of Puppet Ponyo with the sea lion -- though I can't decide if my photogenic plushie's smiling at the sea lion or looking at it fearfully! ;b

As for the polar bear pic: upon further reflection, it brought to mind the photo of Puppet Ponyo with the "ninja warrior" at Toei Kyoto Studio Park. What do you reckon?

Yes, I agree your past "ninja warrior" Puppet Ponyo pose does come to mind while looking at the polar bear photo...The polar bear looks more predatory and frightening to me and I think any sensitive plushie might have a nightmare after posing with this creature from the cold North.

I think Puppet Ponyo has a sensitive side but remember the feisty side shown by Ponyo in the movie! ;b