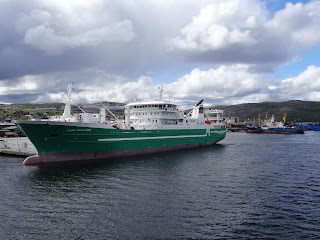 Russian boats in the harbour of the northeastern
Norwegian town of Kirkenes (population around 7,000) 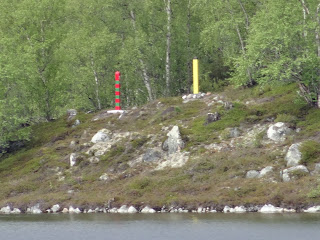 A few kilometers to the east of the town, red and green
striped posts mark out what's Russian land while yellow markers
with black tips have been erected on Norwegian soil 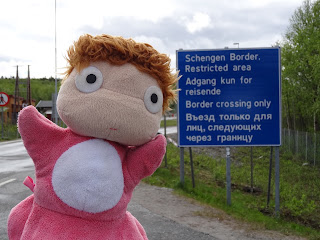 For a number of passengers on board the MS Richard With, Kirkenes -- situated about 400 kilometers north of the Arctic Circle and further east than Istanbul -- was the final port of call on the cruise.  But for many others, this small Norwegian town where the ship turned around to head more than 2,000 kilometers back to Bergen (where our cruise had begun), represented only the midway point in our voyage -- and I think it's safe to state that those remaining on board for the southern section of "the world's most beautiful voyage" felt happier when the ship docked at Kirkenes than those who disembarked from the vessel for the last time there.

While my mother and I did go ashore at Kirkenes, it was only for a few hours in order to go on an excursion to the Russian border.  And although we didn't cross into Russia at any point, we still felt like we got a taste of Norway's behemoth of a neighbor while in the area -- what with our seeing Russian ships in the town's port and Cyrillic alphabet on road signs in Kirkenes and its surroundings as well as finding a rather tacky souvenir shop at the border station of Storskog that was crammed to the brim with such as matryoshka dolls, images of Lenin and Putin (on enamel badges, ceramic mugs, etc.), and hip flasks decorated with CCCP emblems.

Like Honningsvad and Bodo, Kirkenes suffered much damage during World War II.  Our tour guide at Kirkenes was an elderly gentleman who recalled life under German occupation and also the moment he realized that the town had been liberated by the Soviet Union's Red Army.  Delivering his spiel in German, Norwegian and English for the benefit of the passengers on the tour bus, I don't know if he varied what he said when speaking in different languages.  But in English, he spoke about how devastated Kirkenes had been by the Nazis and how well the Red Army had treated the townspeople, and how to this day, the people of Kirkenes retain good feelings for the Russians.

To hear this Kirkenes resident talk, the town -- while small -- was pretty cosmopolitan, and culturally open-minded.  Not only was Kirkenes's port utilized by many Russians (including those who specialized in catching king crabs) but immigrants from many different parts of the world had settled there -- and managed to co-exist with the long-time residents.

After we had returned to the ship, a British woman and I got to talking about the excursion we had gone on, and what the tour guide had said.  We both agreed that what the gentleman had said about integrating new immigrants to Norwegian society made quite a bit of sense.  And if the bulk of Norwegians think like him, one should safely surmise that the country's weather may be cold but the people's hearts are pretty warm indeed. :)
Posted by YTSL at 6:24 PM