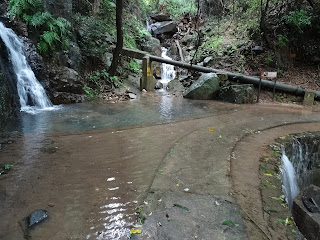 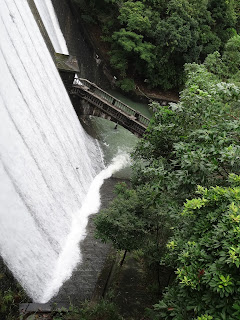 At Aberdeen Upper Reservoir, there was much more
run-off pouring out then I had previously seen during a drier month 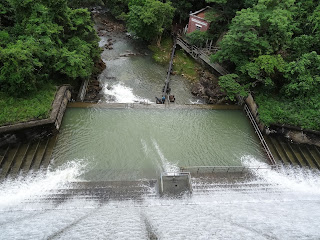 And it was the same story at Aberdeen Lower Reservoir
(For comparison, here's a link to a blog post with photos from drier times!)


Regular readers won't be too surprised to learn that I went hiking today -- this being Sunday, my regular hike day and all.  On occasions where it's recently rained, I tend to prefer to go for largely paved paths; since I'm generally not a fan of areas that get super muddy and where one is in danger of encountering a number of overflowing hill streams. For quite apart from not liking to get all that dirty and wet, I also think that it can make situations when one is more likely to slip, and slip up!

Also, when hiking after rain has poured down in Hong Kong, I tend to prefer going along trails that I know are most likely to be well maintained, such as those that make up Hong Kong hiking's big four (i.e., the Maclehose, Wilson, Hong Kong, and Lantau Trails).  Thus it was that I started off today at Wan Chai Gap and quickly got on a section of Stage 4 of the Hong Kong Trail.

But while my hike began innocously enough on a paved road, the trail quickly got more slippery than I expected: first, because so many fruits and trees had fallen from the trees and plants on either side of it, and had been squished by previous hikers; and subsequently because the unpaved bits of the trail which had been easy enough to go along during drier times now were on the muddy and slippery side!

About 10 minutes into the hike (which had began at Wan Chai Gap after I had got off the bus that had taken me up there from the concrete jungle on the southern banks of Victoria Harbour, I came across a sight that I actually hadn't expected to see along the trail: one which had water overflowing over a paved section of a trail, courtesy of two hill streams which were flowing much more strongly and with far greater volume than I had seen in all of the previous times I had been on this actually not unfamiliar route!

Telling myself to be brave, I decided to walk along and beyond the waterlogged path rather than turn back so early in my hike.  And I'm happy to report that while I encountered some muddy sections later on, I didn't have to deal with much overflowing water after that!

Also, seeing -- and hearing -- so much rushing water early on in the hike did get me thinking that perhaps this afternoon would be a good time to go have a look at the nearby reservoirs.  And so it proved, with the voluminous run-off from both the Aberdeen Upper and Lower Reservoirs making for quite the impressive sight!

So, for those seeking Hong Kong sightseeing recommendations for the afternoons (or days) after a substantial amount of rain has fallen: why not go and visit those reservoirs where one can see the run-off, and/or those waterfalls which exist all year round but are particularly strong flowing during the wetter times of the year such as that at Mui Wo's Silvermine Bay along with the cascades over at Chiu Keng Tam (AKA Mirror Pool) and Bride's Pool?
Posted by YTSL at 10:44 PM

Wow, that stream was quite a spill. You walked along Lady Clementi's Ride by the left while going down hill, right? I have never seen it like that. Maybe more stones had been washed under the path owing to the rainy week, blocking the water passage.

It might be a bit dangerous if hikers reach the location after dark and without a torch.

You got it re the location of the spill in the top-most photo! And yep, I've never seen that area look like that before. It really goes to show how different the same parts of Hong Kong can look/be in different seasons (wet vs dry, summer vs winter, etc.)!

And goodness, yes: I most definitely would NOT recommend going along that section of Lady Clementi's Ride and the Hong Kong Trail after dark, especially without a torch, after a downpour!

From the waterways of Norway to the slippery roads and trails of Hong Kong after a downpour -the element of water has been a dominant theme in your recent entries.

I hadn't thought of it before -- but you're right about there being water seemingly everywhere I've been lately! ;b