Beer: expensive but good in Norway! 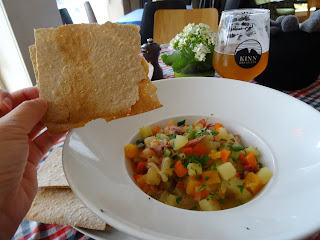 On the day I visited KODE, I lunched on this wonderful
soupy stew dish and Norwegian flatbread 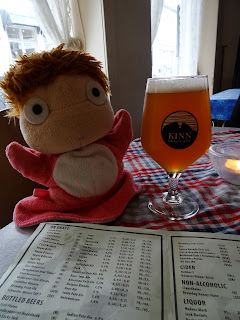 Puppet Ponyo posing with the glass of beer I also had at lunch,
and the beer menu showing how expensive beer is in Norway! 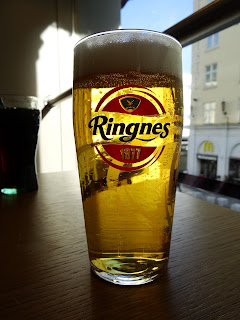 Even mass produced beer in Norway is expensive
...and drinkable ;b


When I told her that I was going to Norway, my German friend -- who had kindly taken me to lots of biergarten and brauhaus when I visited Germany -- opined that I had picked the wrong European country to go to, as beer is super expensive in that Nordic country.  While there are many elements of my visit to Norway (including the country's amazing scenery and delicious food) that I did enjoy tremendously, it's also true enough that that I found the beer on sale there to be shockingly expensive, with the prices going as high as 70 kroner (~HK$67) for a small glass of admittedly very delicious (and alcoholic, at 10.4%) Konrads Stout and 210 kroner (around HK$199!) for something closer to a pint of the even more alcoholic (at 13%) Konrads cherry imperial stout at Tromso's Ølhallen bar!

In a recent international survey, Hong Kong was listed as being the second most expensive place to get beer in the world.  That finding is very hard to believe for me in light of what I discovered to be the case in Norway -- where beer is pricey, and also difficult to come across (not least because 7-Elevens don't sell alcoholic drinks and there are laws that make it so that you can't buy beer in supermarkets after 6pm on weekdays, 3pm on Saturday and at all on Sundays)!


Because beer is not only high priced but also not that easily accessible, I only consumed it on a total of 8 times in the 15 days or so that I spent in Norway --  and on just one of those occasions did I actually drink more than one glass or bottle of the "liquid bread"! (Also, I only tasted some other type of alcohol on two other occasions: that is, the first time I crossed the Arctic Circle on the MS Richard With, and the first time I tried some Aquavit and -- sorry! -- thought it tasted medicinal!!)

For the most part, the beers I had in Norway were very good indeed.  In fact, I thought that some of them tasted downright excellent -- something that I had come to expect after having tasted the excellent Nøgne ø imperial stout over drafts over here in Hong Kong.


Still, I hadn't expected good Norwegian microbrews to be so readily available in bars like the Ølhallen in Tromso with 56 beers on draft and bar-restaurants in Bergen such as the cosy Pingvinen with 18 different beers on tap.  And it was at Pingvinen, located just a few minutes' walk away from the main KODE museums and also the hotel I was staying in, that I went for lunch on my final full day in Norway, and so much did I like the place that I took my mother there for dinner later that day (Also, yes, I did have more beers that evening -- and ones different from what I had had at lunch!)


Incidentally, at the bars I frequented in Norway, I didn't see anyone appear all that drunk.  In contrast, my mother and I watched -- with incredulity and some amusement -- two young women who had got on board the MS Richard With for a short period (as those locals who looked upon as a the Hurtigruten ships as ferries were wont to do) as they appeared pretty tipsy while drinking just one glass of beer, get into a giggly mood when they were drinking their second glasses of beer, act pretty loud when they were on their third beers and looked on the verge of throwing up when they had their fourth -- and, as it turned out, final -- beers!

The impression my mother and I got was that many Norwegians are dissuaded from drinking alcohol by the high prices and difficulty acquiring them.   At the same time, when they do get their hands on alcohol, they are quite likely to binge drink -- and, because they don't imbibe that often and much, have lower alcohol tolerance than most "white" people I know.  All of which can make for quite the... unusual and interesting situation -- one that I don't think one would find if alcohol weren't such a "taboo" item, and is imbibed over meals (as is the case in, say, Japan)!

Hi again!
Interesting, as always, but this time I feel obliged to correct your impression slightly, if you don´t mind:)
Beer, and indeed all alcoholic beverages are expensive in Norway, compared to all other countries, because of taxation. However, it is really not expensive to Norwegians. We are always happy to get our hands on cheap alcohol and this is why many of us will go to Sweden or any other bordering country to buy some (within the legal limits of course;)) or prefer to take our vacations in southern Europe where the weather is warm and alcohol cheap!
That said, nothing will hinder us in maintaining our binge-drinking at weekends or our newly discovered more continental every-day drinking. alcohol consumption has gone up in Norway over the last two decades or so and I think that had you gone out on the town in Trondheim for example an average Friday or Saturday night you would have witnessed a fair amount of excessively drunks. And I haven´t even begun to talk about our homemade moonshine............which I won´t, I don´t think.
T

Hi Tone (it's you, right? If so, I'm going to use that name since there's another commenter on this blog who goes by T! ;b) --

Hmmm, I see where you're coming from when you say that alcoholic beverages in Norway aren't really expensive to Norwegians -- in that Norwegians tend to earn quite a bit more than most people in the rest of the world. And I can also believe that binge-drinking goes on during weekends, etc. I just wasn't in a bar in Norway when it happened!

And I did wonder whether what the moonshine situation would be like in Norway... but you've confirmed my suspicions even without going into much detail at all about it!

Out of curiosity: from what you know, what's the moonshine like -- i.e., good tasting or horrible? Also, have you seen the Buzzfeed video on moonshine? ;b

Hi!
Yeah, sorry, it´s me. I am lazy, so I usually sign my work e-mails with T only and I had´t really read any of the other comments.
I don´t come across moonshine very often any longer, it´s mostly something people used to drink before going out, or at afterparties which might sound like a strange practice, but I guess stemming from the high prices of alcohol young people tend to gather at someone´s house before they go out and then, since everything closes at 0200am and people want to continue the party, they´ll go to someone´s house again (pity to the neighbors!!) However, I can´t say for sure, but my impression is that young people today tend to indulge in other illegal substances more freely than before.
I think it is more commonly drunk in the countryside still.
So how does it taste? It´s mostly made from water, sugar and yeast and really good moonshine will taste like vodka (almost), but mostly it´s horrible, very strong and quite similar to the Chinese rice liquor(?) that I was served in Beijing. No, I think that was better!
In the countryside around Trondheim it is often served in coffee and called "karsk" You are supposed to put a coin in your cup , cover it with coffee and then pour moonshine in until you can see the coin again. Keep in mind that the moonshine can be really strong , up to 96%.
It used to be the first alcohol teenagers tasted because it was relatively cheap and worked fast. As I am writing this I realize that I am not totally up to date on this whole scene anymore. Anyway, some (sub)cultural tidbits there!!!!
Tone

"stemming from the high prices of alcohol young people tend to gather at someone´s house before they go out..."

And ah ha, so the price of beer in Norway IS high to some Norwegians! ;D

Also... omigod re the thought of some moonshine being up to 96% alcohol!!!

In any case, thanks for your (sub)cultural tidbits. They're fun to read and know. :)

Your Norwegian cruise-adventure deserves a good beer entry...In addition to her interest in scenery and culture on her travels, Puppet Ponyo also looks pleased to present this beer menu.
...Since she doesn't drink (or is not allowed to do so), this saves you money on this "expensive" beer.

Considering she doesn't drink, little Puppet Ponyo does seem to end up being around alcohol quite a bit, doesn't she? ;b