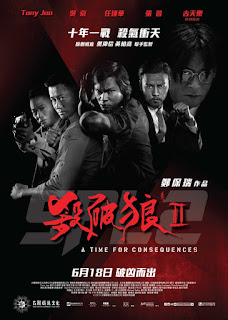 Tony Jaa stars in a Hong Kong-mainland
China co-production! :O
SPL II: A Time for Consequences (Hong Kong-Mainland China, 2015)
- Soi Cheang, director
- Starring: Tony Jaa, Simon Yam, Louis Koo, Wu Jing, Max Zhang Jin
Ten years ago, Donnie Yen, Sammo Hung and Simon Yam starred in an action blockbuster directed by Wilson Yip that some Hong Kong film fans considered to be, in the words of one online reviewer, "Easily the best Hong Kong action film of the year".  Despite such accolades though, the crime actioner was unable to pass the HK$10 million mark at the local box office that constitutes financial success for Hong Kong movies.  So it's probably not that much of a surprise that SPL did not immediately spawn a sequel.
Unexpectedly, however, the summer of 2015 has seen the release of SPL II: A Time for Consequences. Even more perplexingly is this new crime actioner being pretty much a sequel in name only. And while it has Wu Jing fourth billed once more (though this time around, he actually gets a more memorable part), the production retains just Simon Yam of the 2005 film's three main stars and sees the original SPL's director taking the role of co-producer (with four others) and leaving the helming duties to Motorway's Soi Cheang.  In addition, Wu and Yam play different characters in SPL II than they did in the first SPL!
Whereas Wu had played a bad guy in SPL, this time around, his character only pretends to be one.  An undercover cop, Kit was given a dangerous assignment by his superior officer Wah (Yam), who also happens to be his uncle.  So when the younger fellow goes missing, the older man has both personal as well as professional reasons for wanting to track Kit down and go to his rescue.
After his cover is blown and he's fingered as the person responsible for preventing the abduction of a man (Jun Kung) whose heart the chief villain -- a man who happens to have a physically weak heart -- wants transplanted to his body, Kit is punished by being given a false criminal identity and incarcerated in a Thai prison whose stylishly besuited warden (Max Zhang Jin) happens to not only be beholden to the evil Mr Hung (Louis Koo) but also be a black market organ dealer on the side.
Accorded considerably worse treatment than the prison's other inmates, it looks like Kit has been dealt an extremely terrible and hopeless fate.  But as luck would have it, there's actually a guard in that horrible facility who's got a good heart along with pretty incredible martial arts abilities.  And while it initially seems that Chatchai (Tony Jaa) will do anything -- including close his eyes to injustice -- to ensure that he gets help to save his sick young daughter, he turns out to be a man with a conscience who will put the welfare of innocent others before even his beloved child and himself.
Considering that it's got two very capable action actors in Jaa and Wu in its cast, SPL II: A Time for Consequences sure does spend a lot of time on convoluted plottings that not only slow things down but often come across as far too contrived to be emotionally involving.  Furthermore, things are definitely not helped by the movie's top-billed dramatic -- as opposed to action -- actor being Louis Koo, who just does not have the requisite gravitas to either convincingly portray a top villain or be taken seriously while having the distractingly weird hairdo that he does in this film!
Fortunately for the film, the other significant cast members actually acquit themselves well dramatically -- and I mean those much better known for their action than dramatic work such as Jaa, Wu, Zhang, and Ken Lo (in a small but significant part as Chatchai's uncle and fellow prison guard), along with the consistently reliable Yam (who excels in a demanding, emotional, anchoring role).  And I'm sure there are a number of action movie fans who'll feel that the climactic action scenes were worth waiting for.
Personally though, I would have preferred for the movie to have been about half an hour shorter, with certain dramatic scenes (such as those involving a nightmarish wolf or tree analogies) edited out altogether.  In addition, there are way too many coincidences in the story; and while Dante Lam was able to make use of notions of fate to good effect in The Beast Stalker, few of his fellow Hong Kong filmmakers have been able to do so in recent years, with many of these attempts coming across as not only overly contrived but just plain uninventive and old.