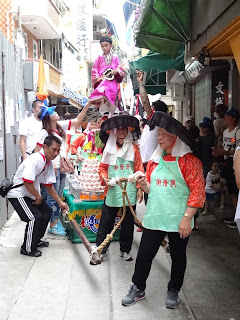 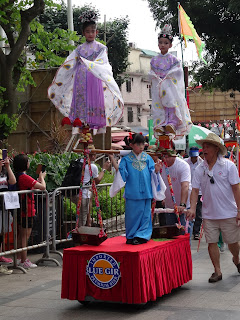 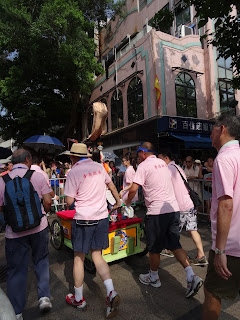 Where did the (bulk of the) floating child go?! ;O
Last Saturday morning, I went to Cheung Chau to take part in a beach clean-up (like that which I had spotted taking place at a Discovery Bay beach while hiking the area sometime back).  While on board the ferry taking me to the island that I'll forever associate with the movie Just One Look, I got to realizing that I had yet to blog about my previous visit to it; one made special by it having been the first time that I went there during the famous Cheung Chau Bun Festival (which featured in another beloved Hong Kong film, My Life as McDull).

Rather than go and watch the bun scrambling (which ended up not taking place this year because of bad weather), I focused on checking out the Piu Sik (Floating Colors) parade which I got an enticing taste of on a visit to Cheung Chau five days before the Bun Festival a few years ago.  Even after one finds out how the children are made to look like they're "floating" atop objects that shouldn't be able to support their weight, it still can make for a surreal as well as cool sight!

With the temperatures having risen to a pretty high level by the time the Piu Sik (Floating Colors) parade got going, some of the young participants looked like in danger of wilting in the heat.  And in at least one case, a participant decided that he (or she) had had enough midway through the parade.  The funny thing though was that the rest of his (or her) party continued on the parade route, causing great mirth since it looked like the chief participant in that party had partly vapourized (see the third picture from the top of this blog post)!

Despite the trying conditions, some of the other "floating" children appeared to be enjoying being the center of attention, not only staying the course but also keeping on smiles and responding to waves from the crowd by happily waving back.  Clearly they were aware that, even with the "competition" including such as colorful "dragons", "lions" and "unicorns" (like those seen at the Tam Kung Birthday Parade in Shau Kei Wan which takes place on the same day as the Cheung Chau Bun Festival's main day), they were the undisputed stars of the endearingly quirky show! :)
Posted by YTSL at 6:08 PM

Your top photo especially captures "the kind of scene" that can make Hong Kong's Outlying Islands such a special place.

I'm glad you think of Hong Kong's Outlying Islands as special places. Of them all, I think my favorite is Cheung Chau -- and is most certainly the one, after Lantau, that I've visited the most. :)