A tale of two Kvernes churches 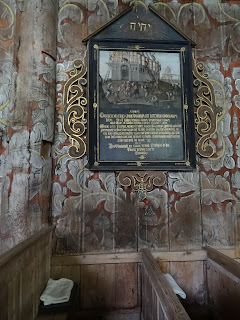 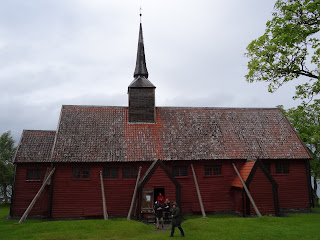 The stave church at Kvernes is physically modest in comparison
to those at, say, Heddal -- but I found it interesting all the same 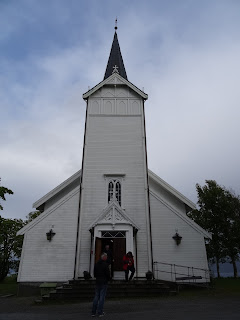 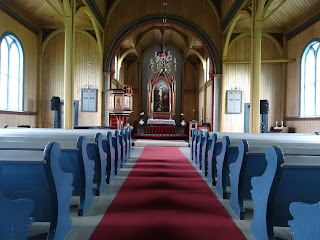 While the younger church is less historical than its older neighbor,
it also is noticeably warmer and more comfortable!
On the penultimate day of the Hurtigruten cruise I was on that took me from Bergen to Kirkenes and then back again, my mother and I went on an excursion that took us off the MS Richard With for several hours and saw us travelling by land to such as the village of Kvernes to check out two churches located next to each other.
One of just 28 stave churches remaining in Norway, the Kvernes Stave Church dates back to around 1300 and contains some interesting artefacts, including a painting on the wall whose frame has Hebrew along with Latin writing on it.  While its exterior is painted in warm colors, its interior felt really cold even on the June afternoon that I visited it.  And since I'd tend towards the opinions that Norwegians feel the cold less than the likes of me, I think it says a lot that in the church pews can be found blankets for those who spend a significant amont of time sitting inside the noticeably uninsulated building!
Given the physical discomfort that its parishioners had to endure, it is understandable that in 1893, a new church was built to serve the residents of Kvernes.  Happily, it also was thought fit to save the old church from demolition.  So now the two churches, newer and older, more physically comfortable along with more historic, stand next to each other -- in green surroundings overlooking nearby fjords as well as forested hills and grassy meadows.
Although it's one of the smallest stave churches in existence, the Kvenes State Church nonetheless can accomodate 200 people.  And while it was part of the Lutheran-affliated Church of Norway later in its history, it's notable for an altarpiece in which the Virgin Mary and her mother (Saint Anne) prominently figure remaining in place up until today.

In contrast, the altarpiece in the new Kvernes Church shows Christ on the cross.  What's more, this larger as well as newer church -- which seats around 350 people -- is decorated in colors which bring to mind the Norwegian flag.  (Speaking of which: like Americans, the Norwegians really do seem inordinately proud of, and have a personal connection with, their flag -- and it thus can be seen flying from poles in front of private houses as well as public buildings in many parts of the country, and also emblazoned on such as sweaters, car license plates and many a tourist souvenir!)
Posted by YTSL at 9:33 PM

The older church looks very interesting both inside and out. Interesting painted design on the wood walls. Did you wrap up in a blanket while you were inside?

I agree that the older church is interesting and am glad it didn't get torn down. At the same time though, it was so cold inside that I breathed out vapors! Didn't wrap myself in a blanket though as I didn't go and sit in any of those pews. ;b