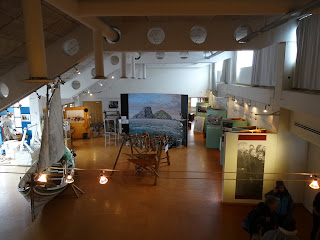 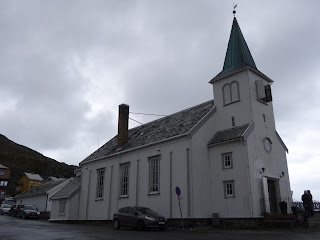 At the museum, I learnt that Honningsvag Church is
the only building in town which predates the second world war 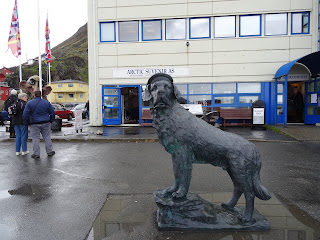 After I told her I had spent some time onshore at Honningsvag, a MS Richard With crew member admitted to me that all this time, she still hadn't figured out what, if anything, was worth checking out in this northern Norwegian town of slightly less than 5,000 people that looked quite a bit bigger on a map I was given of it than is actually the case.  And it's true enough that most of the ship passengers who step ashore at this Hurtigruten port of call do so to board a bus that will take them to the North Cape (Nordkapp in Norwegian).

Rather than venture out to the part of Norway often billed as the northernmost point of continental Europe (despite it actually being located on an island), however, I contented myself with visiting the North Cape Museum.  Even smaller than the local museum I visited at Bodo and located, unlike it, in a modern building, this museological establishment is one that I get the feeling that many people are likely to consider worth checking out -- and especially since its admission fee is a fairly hefty, considering the insitution's size, 50 kroner.


Being the museophile that I am though, the North Cape Museum was the Honningsvag attraction that most caught my eye.  And it's out of honesty, not (just) generosity, that I concluded that it's actually a rather nice museum, especially given the diminuitive size of not only the institution itself but the town in which it is located.


Right from the start, I warmed to the place; not least because of the welcoming staff members who I met there (one of whom had such a distinctively British accent that I to learn that she actually was a local Norwegian resident of the town!).  And while checking out the exhibitions, I liked that the curator(s) had made the point to tell interesting, heartwarming stories about such as a woman who had refused to leave her weaving machine (now on display at the museum) when she and her family were forced to leave town during World War II, and the St Bernard who became a crew member of a Norwegian naval submarine along with his owner (and was so beloved that when he fell into the sea once, a number of seamen jumped into the water to rescue him!).


Although it's 70 years since the end of World War II, there's little question that it's still remembered and recounted in these parts; this since the Nazis implemented a "scorched earth" military policy that saw many communities being laid to waste. To quote the author of an article on the subject: "almost every single building in Norway’s vast northern area from Finnmark in the east to Hammerfest in the west was burned down or demolished, apart from a few churches."


In all honesty, to read about the devastation is one thing but to see photographs of it can be something else and really hammers home the message, and situation in which many northern Norwegians were put in for a time.  That's my feeling after coming across photos of Honningsvag in which just one building (the 19th century wooden church which has remained standing and operational to this day) was left standing for miles.

On a happier note: knowing about the terrible devastation gives one a greater appreciation of Honningsvag -- and many other communities like it -- being rebuilt and coming back to life after the  second world war.  And I also like that the North Cape Museum's exhibits don't stick to just recounting the past but, also, includes contemporary displays, such as a current exhibition of photographs by local schoolchildren focused on the local fishing industry (which now includes king crabs among their rich bounty). :)
Posted by YTSL at 5:50 PM