Delicious Norwegian food on board the Hurtigruten's MS Richard With! 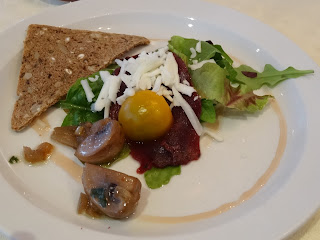 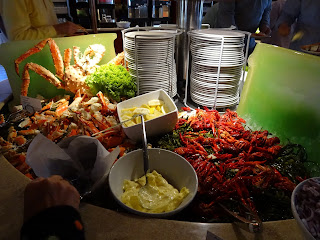 Among the memorable dinners on board the ship was
a seafood buffet that included all the king crab one could eat! 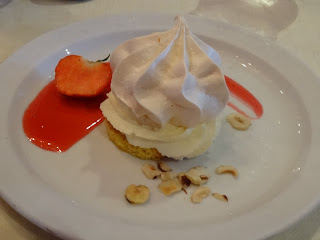 Dessert one evening was the very Norwegian
-- and tasty! -- Kvæfjordkake :b

While on a group hike recently, someone I was meeting for the first time asked me what I like to do besides go hiking.  My immediate reply was, truthfully, "eat!"  And, in all honesty: for all of the beautiful scenery on show along the Norwegian coastal route plied by Hurtigruten's MS Richard With (and the nice people I met on board the ship), I wouldn't have been able to thoroughly enjoy myself on the voyage if the food had not been as good as it was throughout!

On the ship, breakfast and lunch were served buffet style daily while dinner were mainly sit-down, three-course-meal affairs.  If I had my way, all the meals would have been buffet style deals; this particularly since those dinners where this was the case -- including an outstanding seafood buffet dinner that an English passenger was moved to wonder how many hundreds pounds (sterling) it'd have cost if it had been served in a London restaurant -- were so delicious as well as generous, with dishes constantly being replenished (including those containing fresh king crab, plump prawns and some shellfish the non-Scandinavians among us had problems identifying!).

Most days, my favorite meal of the day was breakfast -- whose offerings regularly included at least two hot dish options (such as toast with a fried egg and bacon on top, and pancakes) along with a variety of cereal, pickled herring and vegetables, cheeses, cold meats, salmon (cured, smoked, etc.) and fruit (fresh and, to go with the cereal, dried).  And at the risk of sounding like a glutton, I loved breakfast on the ship so much that I reverted to having a multi-course morning meal like I used to do at boarding school in England (where breakfast was the only actually palatable meal of the day)!

Pretty much every single morning on board the ship, I'd make for a toothpaste-like tube of... creamed cod caviar that tasted a lot like a sweet version of mentaiko and spread some on a piece of toast. Almost as often, I'd also make a point to get a few slices of Norwegian brown cheese.  (And to give you an idea how much I grew to love both these Norwegian food items, I finally broke down and got myself a toaster oven here in Hong Kong -- after years of feeling I could live fine without one -- upon returning from my recent Nordic holiday because they do go so very well with good toasted bread!)

Considering how much I ate at breakfast, it actually quite amazing that I still had an appetite for lunch -- but that's because that mid-day meal wasn't too bad either.  Funnily, although there always were hot dishes available, I hardly ever went for those.  Instead, I tended to go for the salads, caviar (of which there frequently were three types -- one pale yellow and the least salty, one bright orange and medium salty, and one black and definitely the strongest tasting (and saltiest) of the lot) and cheeses (which, sadly, didn't include the brown Brunost but did a couple of tasty blue cheeses) -- and some days also went for such as the pickled herring (which I couldn't stomach at breakfast but was fine with at lunchtime!).

At the three course dinners, my mother and I felt bad for those rare -- but they did exist! -- passengers who didn't care much for seafood as most of what we were served for the main course, and frequently too for the appetizers, tended to be fish or shellfish; many, it not all, of which came from the waters that the ship sailed in.  (Hurtigruten made much about being able to get fresh produce from local suppliers daily, including local specialty ingredients, be they king crab, particular types of fish or cheese, cloudberries, and reindeer.)

As someone who tends to not be a super big fan of fish cooked Western style, I worried that I'd not find many of the dinner menus to my liking.  But for the most part, I did enjoy such as the baked Arctic char and grilled trout that was served -- though it's also true enough that my favorite parts of the dinners were the delicious desserts, with one evening's pavlova with forest berries being the most memorable along with the Kvæfjordkake.

For those who're wondering: No, we were not served whale.  But one evening, we did get to taste the dried cod fish that traditionally is hung out to dry on wooden racks like those we had seen in Svolvaer.  And while some of our fellow diners decided it wasn't to their liking, both my mother and I thought they really didn't taste too bad at all! ;b
Posted by YTSL at 6:35 PM

I love reindeer steak. I had it in Oslo on Chinese New Year more than 2 decades ago.