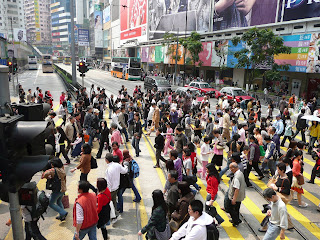 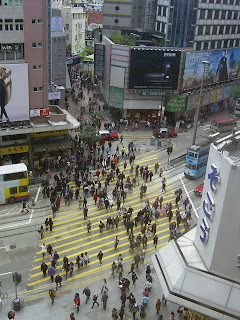 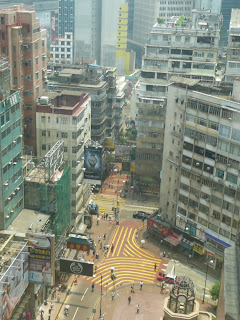 See the stripes? More specifically, see the stripes on the road? Photo hunters from countries with zebra crossings should easily recognise the Hong Kong variant which makes use of bright yellow -- rather than the more traditional white -- colored stripes but serves the same function: of indicating that the demarcated area is where pedestrians are allocated extra rights of way to cross a road.

As can be seen in the first photo in this entry, there really can be a lot of people on and crossing the road at the same time in Hong Kong. (Incidentally, that section of Hong Kong -- in Causeway Bay, in front of the Sogo department store -- which also is the focus of the middle photo is particularly famed for its busy nature... and so much so that it's appeared in many movies, including Hong Kong's City Without Baseball (2008) and a feature-length documentary about the Berlin Philharmonic -- that has been among my Hong Kong International Film Festival viewings -- Trip to Asia: The Quest for Harmony (Germany, 2009).

For one more look at stripes on streets, here's also offering up photo number three -- taken from an upper floor of Hong Kong's Times Square and showing that even famously crowded Causeway Bay sometimes can appear relatively bereft of people! (And this even before the recent economic recession hit the territory... :S)

Great stripes photos for this week. :)

Those are pretty common on the roads in HK :) I've always found it interesting, that they went against having the normal black and white stripes.

Oh yes, I could see those stripes. Thanks for coming by to see mine..

Some of the zebra crossings in HK are long with so many pedestrians.

Love your yellow stripes!! fantastic shots and perspectives.
I live in Spain and my pic is from France, where I am heading to in a couple of hours :)
Happy weekend!

They certainly stand out in yellow, those zebra crossings. Excellent choice for this week YTSL.

I love learning about Honk Kong from you posts. HK is on my list of places to visit.
Great photos and take.

Bravo! What a creative choice for our theme! I would never have imagined capturing that! Nice job.

Now that is an impressive zebra crossing and an excellent take on this week's theme!

Gosh, those are wide zebra crossings! And curved too. I've never seen anything like that before.

Lovely take on stripes. It's always nice to see streets from an aerial view.

Mine is up as well. Drop by!

My stripes are posted. Found all over Texas! Come see for yourself. Happy weekend wishes sent your way.

Nice post. I enjoye learning about (and seeing) HK on your blog. Happy weekend.

That is a lovley and impressive zebra crossing and an excellent take on this week's theme!

What a great choice for the theme. Great photos too.

great captures on the stripes. i played too. hope you can visit mine.

You mean you like that I shot from elevation? If so, you might like to know that the first shot was taken from the upper deck of a double decker bus while the two other were taken from nearby buildings. :)

Yes, they are. Hong Kong really is a city of pedestrians and pedestrian friendly. Re why the stripes are yellow: I think yellow stands out more than white. Having said that, saw a black and white zebra crossing while out and about in Hong Kong today! :)

Am glad you could see them. In the first photo, there are so many people that I worried that visitors would fixate on the people and not notice the stripes under their feet! :D

Yes, well, since some of the roads here are pretty wide! :)

Hope you have a great time in France! :)

Thanks, and great to have you visiting and Photo Hunting again. :)

Hope that you will visit Hong Kong before too long and have a great time when you visit. In the meantime, free free to use this blog to help you to figure out what you might like to do (and where you'd like to go) while here! :)

Thanks and well, I notice stripes in so many places that I figured I'd better concentrate on one kind of stripes. So... :)

Impressive because so many people use it? If so -- agreed! :)

I'm so glad to be able to show you things you've never seen before! :)

I'd like to see a striped jumbo in nature sometime... ;D

When walking on streets in Hong Kong, I often remind myself to look up because there's a lot of interestings to see beyond ground level. But, yeah, like taking photographs from above of things below too. :)

Thanks... whereas my stripes shots were all taken within just a few minutes walk from one another! :)

Glad to be able to show off Hong Kong to appreciative people. :)

Thank you and hope you have a great weekend too. :)

Thanks and yup, I played by visiting as well as putting up a Photo Hunt entry! ;b

Ohh... That`s a bit different from what we are used to in Norway! Cool shots and great for the theme :)

And, no - the house in my post is not mine. Nobody lives there, and it is really sad because I think it would be soooo lovley if someone fixed it.

Have a lovley day :)

they use yellow? that is interesting

Great photos...you know that first time I had heard of Zebra crossings was when I was in Northern England...I found it to be such a odd saying and I thought it was only unique to England...now I see that it is far more common than I thought....love your photos

Nice shot of the zebra crossing. Here's mine http://www.mirasblog.com/2009/04/photo-hunt-12-stripes.html

I love the clean lines of the pattern in the third photo, even if is does manage to look as if everyone has been kidnapped by aliens or something ;)
It must be hard to find deserted areas in such a populous place.

Stopping in from photohunt!! Great pictures.

I like those yellow stripes, it gives the city a strange allure, too bad no such thing here in New York but there is definitely crowds, tons of them but then again there seem to be more cars than people these days, sometimes I have to wait a while before crossing...

I have never heard of these before, how interesting. And perfect for this weeks hunt.

Love your yellow stripes!!
Fantastic shots and perspectives. And your stories to go with the pics are wonderful, thanks. Wish to visit there someday.

I've never seen so many stripes on the road before. There really ARE a lot of people crossing at one time!

Very creative! I love the pulled back showing the big picture.

Those pedestrian lanes are so wide! I wonder what is the average number of people that crosses those at one time?

You mean the third picture, right? It's not really a zoom out but can see how you'd think that! ;b

Yeah, can imagine that these'd be different sights from anything you see in Norway... and re the house: funny how the drapes remain despite nobody living there. :S

You mean my perspective re the world in general? Thanks, if so! ;b

Imagine my surprise when I went to the US and didn't see zebra crossings, only "PED XING"s whose signs it took me quite a while to realize meant "pedestrian crossing"s! :D

It's surprising how many places in Hong Kong can be quite bereft of people. Not just out in the country parks but in the urban areas. Many a time, I've turned off a busy main street to encounter a quiet one and sections of the city that are often quite interesting!

Figured you were and thanks!

Hong Kong remains a place where more people walk and/or take public transportation than own cars. One more thing that I love about the place! :)

Am glad to have been able to show you something you never even knew existed before! :)

Thanks for reading as well as viewing. :)

The first one is but hmmm... did you see the third??

Yes, well... come to Hong Kong and you'll find that it can be a regular thang. :D

Not pulled back at all. Rather, I just took it from a high floor of a building! :)

Don't know but am figuring: hundreds! :)

oh some of them are just a bit psychedelic :)
oh and btw- no my stripes were from some things my daughter got for her birthday :)
Thanks for visiting me!

They really give pedestrians a wide walkway and they look great photographed from above. Great stripes.

You know what? The first impression of your photos gave me the impression that Godzilla is going to stomp in the middle of the buildings... Haha. I think I'm over imaginative this week. :P

Very interesting this street crossing stripes ! Looks much better than our dull white once !

You're welcome for visiting and thanks for answering my question over on your blog. :)

With so many pedestrians, they better give pedestrians a wide walkway! :b

Aiyah, Hong Kong is the land of Mcdull and Japan Godzilla, lah! ;D

The yellow stripes stand out more than white ones, I reckon... :)

And interesting to hear that Belgium has zebra crossings too. Was wondering whether it was largely a British Commonwealth thang but apparently not!

I clearly do see them! And I also teach my kids the importance of the zebra stripe--- :)

fabulous take on the theme. I LOVE THE last one.. weird crossing. I love it!

Cool -- both re your seeing the stripes on the road and teaching your children about zebra crossings! :)

Thanks -- and not all that weird at all re the last crossing but, rather, pretty good for pedestrians! :b