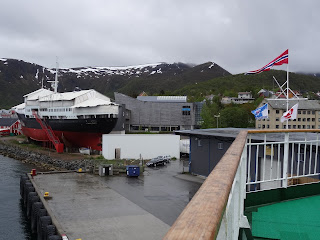 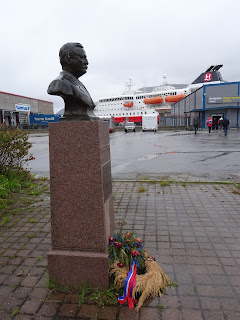 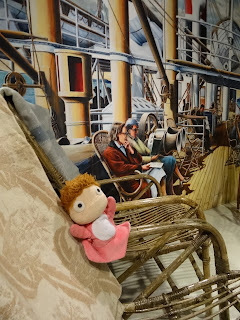 Inside the museum, Puppet Ponyo imagined
what it'd have been like to be a passenger
on a Hurtigruten boat of yore ;)


In between the MS Richard With sailing through the Risoyrenna dredged canal and the Rafsundet Strait (with a detour into Trollfjord), this Hurtigruten ship named for the founder of both the Hurtigruten line and the pioneering Coastal Express made a stop at Stokmarknes.  A small town with a population of just over 3,200, this coastal settlement nonetheless can claim to be the administrative center of its municipality, and the headquarters of the Hurtigruten freight and ferry service which was a veritable lifeline for many coastal towns and villages for decades.


It was cold, windy and rainy in Stokmarknes when we got there.  But this didn't put off a number of the MS Richard With's passengers from disembarking and going over to check out the Hurtigruten Hus (AKA Coastal Express Museum) whose building -- and largest exhibit, the old MS Finnmarken -- was visible from the ship and located just meters away from the dock.


My first impressions of the museum were not positive.  This is not least because it took me some time to find those sections of the facility that I'd consider to be truly "museum-y"; what with the first section one walked into in the building was a large gift/souvenir shop and the museum building also houses such as a bar-cafe, a library, a computer room and a large nautical-themed space set aside for events catering.


And while there are people who may like it that way, the decommissioned MS Finnmarken appeared to have been pretty much left "as was" when it was an active part of the Hurtigruten freight and ferry service in the 1950s.  Put another way: what labels there were in there tended towards the basic in description and the ship felt distinctly old in a not very good way, and smelt unpleasantly musty too!


Just as I was about to decide that the whole museum visit had been a waste of time though, I discovered a more conventional -- and interesting -- exhibit area located behind the souvenir and gift area!  And although the museologist in me would love to be given a chance to make improvements to a number of the displays, I still did manage to appreciate a number of the objects on exhibit and learn some more about the history of the Coastal Express and Hurtigruten (which sometimes is referred to as the Norwegian Coastal Express), and what things were like in the past for their passengers and crew.

So in the end, I guess that the Hurtigruten Hus did/does manage to do the museum part of its job (even while I do get the feeling that it may function more as a community center for the residents of Stokmarknes).  And all this for free -- or, at least, at no extra charge for Hurtigruten passengers; something that's not to be sniffed at since Norway is a super expensive place to visit (as well as live in) -- even more so than Hong Kong, which many people already find shockingly costly!
Posted by YTSL at 11:06 PM

Puppet Ponyo looks very comfortable and relaxed sitting on the arm of the chair. Wonderful photo.

Even though it takes away from the museum-ness I do like the idea of having other things there which may function as a community center. Living in a small town (pop 3600)I wish we had something like that in one place.

I think Puppet Ponyo wishes it had been generally less windy on board the MS Richard With, so she could have relaxed on the arm of a deck chair there!

Re Hurtigruten Hus: I suspect there was an error in translation -- and yes, I can imagine it being a nice community center for such a small town to have.

I like your top photo of the ship. You're certainly doing justice to the maritime history of the region of your cruise journey...Your description of Puppet Ponyo imagining herself as a passenger on a "Hurtigruten boat of yore" definitely fits her pose and she does look quite "relaxed" as sarah sbk observes...I hesitate to call Puppet Ponyo a plushie anymore because she's more like a vivacious member of the human family, partly because the Miyazaki film has animated her in my imagination and also because of her presence in your travel entries.

I don't think Puppet Ponyo will ever appear a jaded traveler because of her youthful and limitless exuberance which some of us also carry within ourselves.

Thanks for continuing to take interest in my Norwegian photos and musings. I really did have such an interesting time in Norway and I do want to blog about it to share my impressions.

And teehee re your comments re Puppet Ponyo. For me, she's most definitely a character -- and one who's personality has become distinct from, even while related to, the Ponyo that appears in Miyazaki's movie. And yes, this one does enjoy travelling -- but also chilling at home with her sisters (Stress Ponyo and Muse Ponyo). ;)