As I disembarked from the MS Richard With at Bergen 12 days after having gotten onto the ship at the same port, I consoled myself with the knowledge that my Norwegian adventure was not yet over.  And as we sailed into the Nordic country's second largest city, I was given another reason to feel cheery -- in that we were greeted with lots of sunshine, bright blue skies and temperatures hitting a balmy feeling  (when compared to what we had experienced for much of the cruise!) 16 degrees Celsius.

Having previously gone up one of its seven hills by way of the Fløibanen Funicular and enjoyed the scenic vistas of "the gateway to the fjords of Norway" and its surrounding areas from up Mount Floyen, my mother and I decided to reacquaint ourselves with this charming city by taking the Ulriken643 cable car ride named after the highest of Bergen's septet of hills and its height in meters.  And yes, we were indeed treated to some spectacular sights up on Mount Ulriken on a spring day which a Norwegian man (who had hiked up the mountain with a baby on his back and his wife for company!) told us was the most beautiful it had been in his home city thus far this year! :) 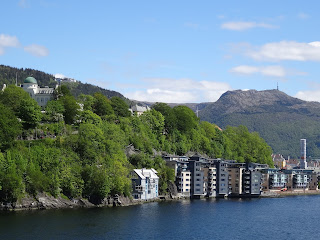 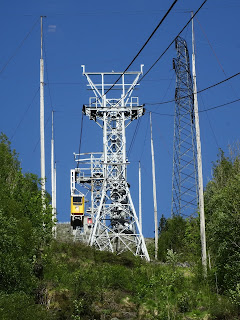 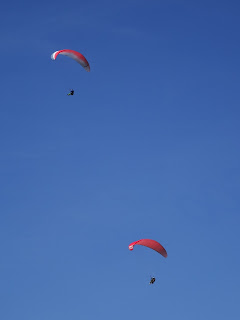 An alternative way to come down Mount Ulriken
that we saw a number of people opting for! 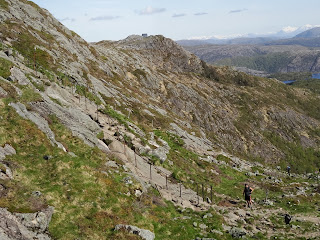 The most popular option that day appeared to involve
hiking up the mountain and then taking the cable car down! :b 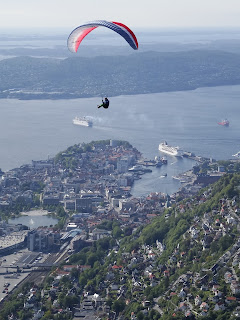 What splendid views that paraglider and his fellow
extreme sports enthusiasts must have enjoyed that day... 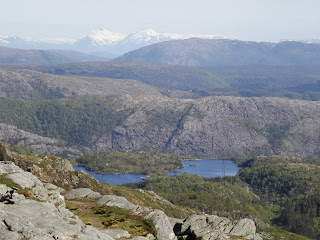 There's no two ways about it: Norway is home to
some really incredible natural scenery 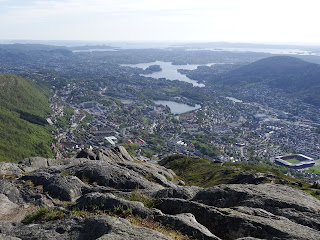 While humans definitely have left their mark on the landscape,
nature's beauty remains highly visible 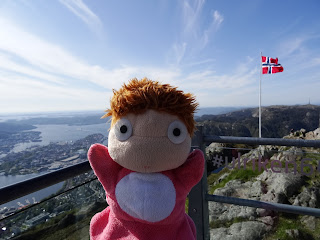 These photos depict how you were rewarded with a "beautiful day" at the termination of your cruise journey. When the weather is clear, Bergen looks like a great place to be outdoors, with plenty of activities...In the bottom photo, family member Puppet Ponyo appropriately celebrates the glory of this day...Your Norwegian entries introduced me to a country I didn't know a lot about.

Despite its reputation for rain and my knowing that it can get very cold there for much of the year, I came away thinking that Bergen'd be a nice place to live -- and yes, it's in part because I could imagine one enjoying plenty of outdoor activities there.

Thanks for taking an interest in my Norwegian entries. And I did feel that I manage to learn quite a bit about the country despite having visited there for only two weeks.