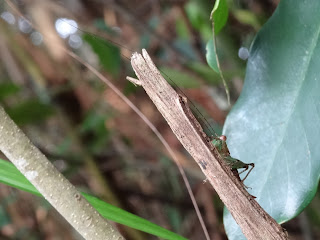 "What are you looking at?" seems to be the question
that this bug-eyed cricket is posing! 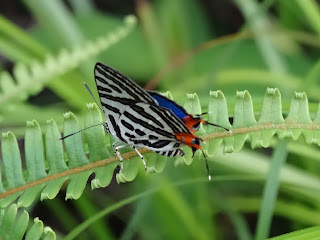 In this case, I have to admit to thinking for a time that
I had caught sight of a butterfly menage a trois! ;D 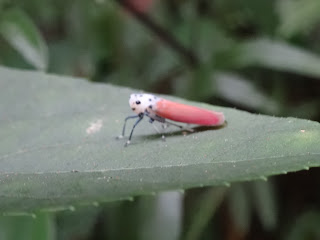 And in this case, I know it's an insect but not much else!* :O


Another measure of how weak Typhoon Linfa was -- at least when it was in the vicinity of "Asia's World City" -- is that whereas one can expect to have days of high visibility in the wake of a typhoon, this weekend saw quite a bit of haze in the air.  So rather than look out for great views while out hiking with a couple of friends this afternoon in Pat Sin Leng Country Park, we concentrated more on critter spotting and checking out the ruins of a number of abandoned villages that we passed by along the way.

In an insect rich section of the country park, I caught sight of a pair of stink bugs in as amorous a mood as two other members of their species that I saw -- and photographed -- up on Victoria Peak last week!  And it really must be that time of the year because I also spotted a pair of tiger beetles doing what comes naturally -- though in their case, they actually moved (away) too fast (as is their wont) for me to snap a photo of them!


At one point in the hike, my hiking buddied and I even thought that we had come across a butterfly menage a trois!!  This was because, with the naked eye, the tips of that unusual butterfly's wings had looked like heads (complete with pairs of eyes)!  But in close up on the computer, I realized that we had been very much mistaken.  Still, considering the other amorous bugs we had previously seen on the hike, I think we should be excused for having jumped to the particular conclusion we made!


Alternatively, none of us dared to hazard a guess as to what the rather bizarre bug we had seen just meters away from the butterfly with the interesting tipped wings.  In all honesty, it's one of those creatures that I could imagine that if, as a child I had drawn something like it in art class, my teacher would have told me that I needed to be more realistic -- because such creatures don't exist in real life!

More seriously, if anyone who reads this blog post and sees its photo can tell me what that particular bug is called, I'd be most grateful.  And apologies in advance for the photo not being sharper -- but this was a pretty small bug and light conditions were not ideal in the particular section of the country park where I came across it. ;S

*Update: I've since learnt that the bug in question is Bothrogonia ferruginea, a genus of leafhopper! :)
Posted by YTSL at 11:50 PM

"What are you looking at" photo made me smile. What a fun photo.

I'm glad you like that photo. I'm really happy I managed to get all of the cricket's ultra long antennae into it! :)