The Umbrella Movement lives on on July 1st, 2015 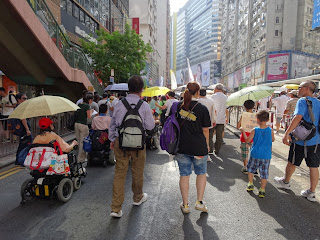 Not your usual protest crowd? 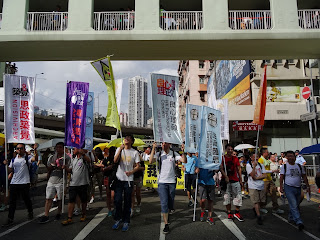 Architects, actors, psychologists, lawyers
and others march together 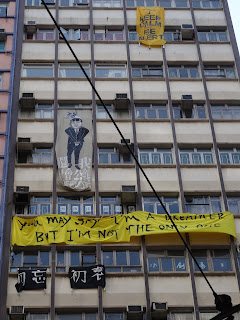 The Umbrella Movement is commemorated
and its dream is still alive 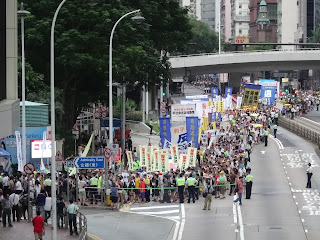 
I was out of town on June 4th this year and consequently missed this year's vigil at Victoria Park.  But I made sure to be back in Hong Kong to take part in the protest rally on the eighteenth anniversary of the handing over of Hong Kong by the British to the People's Republic of China.

Unlike previous years, I went alone to the July 1st protest rally.  Having found a distinct lack of enthusiasm to take part in what has come to be annual event this time around among the usual suspects (in the words of a friend: "Hong Kong people are tired"), I worried that the turnout would be poor -- maybe even as low as it had been for the February 1st march for genuine universal suffrage.


While waiting in Victoria Park for the protest rally to begin and while marching on the streets to Tamar, I couldn't help but notice that the crowd was sparser than on July 1st, 2013 and 2012, never mind last year.  One personal upside to this was that it was easier and quicker to complete the route today -- and I did so in approximately two and half hours (compared to last year's more than six).
Even though this year's crowd was not as large as for last year's amazingly well attended rally, I reckon that it was pretty respectable -- especially given that it was a sweltering 33 degrees Celsius when I made my way to Victoria Park, close to the event's scheduled commencement, and remained so for some time.  While the participant numbers may disappoint some when compared to recent years', a measure of the still not inconsiderable size of today's rally can be gained by my seeing thousands of people still making their way to Tamar approximately an hour after I got there.

On a qualitative note: among the things that never cease to amaze -- and move -- me is how the Hong Kongers who turn out to be seen and heard on July 1 (and also June 4, and -- of course -- during the Umbrella Movement) look like they come from various walks of life and constitute a wide age range.  Also, that my fellow protesters are quite a bit more civil than one often expects of demonstrators -- with no store needing to fear that its windows will be broken or that it will be vandalized, forget looted or destroyed, and no one spoiling for an actual, physical fight with the cops, casual onlookers and even counter-protesters.


This year, I additionally noticed a number of heartening developments at the protest rally that I had previously observed at the "Occupied" areas of Hong Kong.  These include the increased participation of Hong Kongers of South Asian descent; and individuals on wheelchairs, be they assisted in their movements by friends and/or relatives, or going about on their own accord.  And the recycling efforts and giving away of items (the latter of which included appreciated cups of water, bottles of drinks and paper fans) continued this afternoon too!

Although there were people rallying for other causes (as diverse as the Lantau buffalo, gay rights and North Korean defectors), it's hard not to think of this year's July 1st protest rally as a continuation of Occupy Hong Kong and the Umbrella Movement; and when I looked about me while marching this afternoon, I could easily imagine that everyone at today's protests also had been out on the streets (be it at Admiralty, Central, Causeway Bay, Mongkok or Tsim Sha Tsui) at some point(s) during the latter part of last year.

Something that marked out today's event from previous July 1st marches was that the atmosphere seemed less festive.  Instead, the mood of many of the protesters seemed more "focused" and "determined" than anything else: as in determined not to give up the pro-democracy fight, determined to continue exercising what remains their right (including to openly protest en masse), determined to work against their rights being (further) undermined, and determined to have a distinct socio-cultural and political identity as Hong Kongers.
Posted by YTSL at 11:02 PM

Good for them to keep this movement going!

Indeed, and against the odds. At the very least, no longer should people think that Hong Kongers are politically apathetic. If anything, if the authorities don't listen to the people, they risk radicalizing them (further)!