Little to complain about with regards to our Hurtigruten voyage! :) 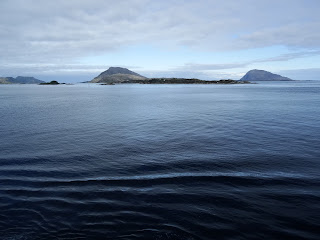 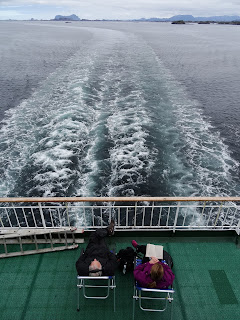 Lying on a deck chair watching the world go by can be
a wonderfully relaxing experience -- and was irrestible
for some folks even when temperatures were on the low side! 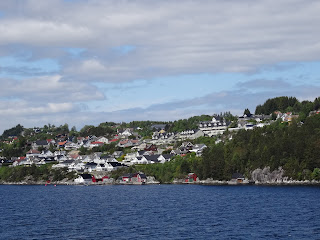 The closer we got to Bergen, the higher density
the communities the ship passed by became,
and the warmer the weather got too! 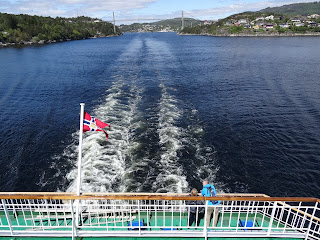 I think it safe to surmise that the majority of
the passengers aboard this Hurtigruten ship will
look back at their time on it with great fondness :)


Okay, there were days when Mother Nature was not at her best (and this seemingly more so on the southbound segment of our voyage -- so that those who opted to just go on this portion of the cruise may not feel as super positive about their vacation experience as those who went on just the northbound segment or took the round trip option).  And there were times when the MS Richard With being in the freight and ferry business interfered with the cruise component of its service by way of it having to keep to schedule so much that it had to shorten certain port calls.


In addition, there were the rumblings of discontent about such as the hard-to-fathom policy in place that required full board passengers to pay additional charges for water at lunch and dinner (but not breakfast, when water was included in the meal charges along with all the milk, coffee, tea, hot chocolate and/or juices you wished to drink). Also, while I didn't personally hear any complaints from people about their cabins being located too close to the kitchen area, I have to say that I often smelt a strongly fishy stench when I stood on the part of the promenade deck that was directly above it -- and am very glad indeed that my mother's and my cabin was on the opposite side of the ship!


On the whole though, I actually don't think that there was much to complain about with regards to our coastal Norwegian cruise.  Indeed, I think the biggest gripe that many of the MS Richard With's passengers had was that the 12 day voyage did not seem long enough for many of us! And this all the more so since, ironically, despite having been behind schedule often on the two days before the ship's return to Bergen (as a result of it sailing against strong winds and waves for much of that time), we were able to get back to where our cruise adventure had begun shortly after lunchtime, like we were supposed to!


What with the passengers having been told to vacate their cabins in the morning (so that the crew could start cleaning and getting them ready for new occupants) and the day having brought the kind of beautiful weather one sees in postcards (more than in reality!), a good number of us folks decided to go and do what I had (mistakenly) envisioned that I would be doing a lot of while on a Scandinavian "Midnight Sun" cruise: i.e., lounge on a deckchair and view spectacular scenery in bright sunshine!  Sitting and shooting the breeze -- while enjoying the lovely views and weather -- with an English couple and a Belgian man I had befriended over the course of the voyage, so much felt right the world -- and I really did feel loathe for my Hurtigruten experience to end!

Incidentally, I found it telling that at our final briefing, tour manager Anna Olivia Wallinder told the ship's passengers that tipping was not expected but, of course, would be appreciated.  (This being Norway, the unwritten understanding was that crew members are paid well and thus don't depend on tips the way that, say, the crew for the Ha Long Bay cruise my mother and I went on a couple of years back did.)


Also, Anna continued, the crew would be happy to get such as chocolates or hugs, if people were so inclined to give them!  While there was some laughter at that remark, a number of passengers -- including my mother and I! -- did end up throwing in some hugs while saying our individual goodbyes to certain favorite crew members (who we had enjoyed chatting with at various points during the voyage), and I have to say that the warmth of these wonderful folks really did seem pretty sincere.

Together with many of our fellow passengers, their presence had certainly upped our enjoyment quotient while on board the good ship bearing the name of Hurtigruten's visionary founder.  All in all, I found their service and attitude superb -- and Anna, if you ever read this, don't worry, we do realize that your admittedly considerable abilities actually don't extend to controlling the weather in early June in Norway, or any other time for that matter! ;b
Posted by YTSL at 9:55 PM

I've enjoyed reading about your Norway trip. This type of cruise greatly appeals to me as it's about the places you visit. And in many places one must "go with the weather conditions". And the cold winds appeal to me.

Absolutely re preferring a cruise where it's about the places rather than facilities and entertainment options on the boat. But oh my re cold winds appealing to you! You really are a cold weather person!!!

Oh, and I'm not quite done yet with blogging about my Norway experiences! ;b