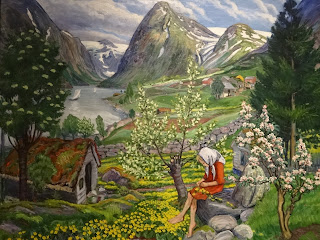 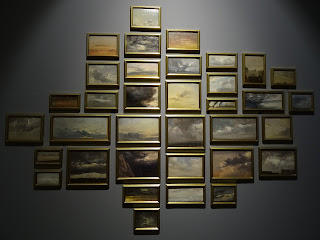 Works by "the father of Norwegian landscape painting",
J. C. Dahl, also can be found in Bergen's art museums 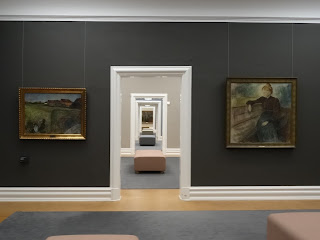 And, of course, so too are those by the most world famous
Norwegian artist of all, Edvard Munch
The day after many delighted people took advantage of the sun shining brightly on Bergen by doing such as hiking up Mount Ulriken and paragliding off it, it returned to being a city of rain.  Rather than let this dramatic change in the weather rain on my parade, I happily made my way to KODE, a group of art museums located just a few meters away from the hotel that I were staying at, after partaking of one of those expansive breakfast buffets that I came to know oh so very well and love in Norway.
KODE 1 (the West Norway Museum of Decorative Art) closed for two years for renovation in January 2015.  But that didn't really disturb my plans since the art museum in Bergen that I wanted most to check out was KODE 3, home of the Rasmus Meyer Collection of works from Norway's "golden age" of painting and -- this was what I really didn't want to miss -- the second largest collection of Edvard Munch paintings in the world.

Rather than make straight for the galleries that housed more than 150 works by Munch in total, I went through the other sections of the museum first -- and in doing so, was introduced to works by other Norwegian artists, including J.C. Dahl and Harriet Backer, a woman artist who I gathered was a significant influence on the Norwegian art scene, not least through her having operated an art school in Oslo that was the forerunner of the National Art Academy.
Early on in my visit, I was taken aback to see another museum visitor openly snapping photos inside the galleries (since many an art museum I've been, like Japan's Adachi Museum of Art, to doesn't allow photography of its exhibits).  But after I found out from a KODE staffer that photography (so long as it doesn't involve a flash or tripod) is allowed in the museums, I went and retrieved my camera from the locker that I had put it in (because bags are not allowed in KODE's public areas), and went on to blissfully use it to take some shots myself!
More surprises were in store in the section of KODE 3 dedicated to showcasing the works of Edvard Munch.  More specifically: even while the Expressionist painter has a not unjustified reputation for having been "a perpetually troubled artist preoccupied with human mortality", he also had -- both earlier and later in his life -- produced works that were considerably less anguished than any of the many versions of The Scream, and in which the human(oid) figures have far less grotesque faces.
After a lunch break, I headed over to KODE 2.  Although the museum is perceived by many to be a modern and contemporary art showcase, it also is home to considerably older works (including works by 18th century Italian landscape painter Canaletto, and art from the Renaissance).  If truth be told, the newer art works were often far less impressive than the older pieces on display -- and when viewed chronologically, one is likely to conclude that art has devolved rather than evolved and developed over the centuries.

In general, I definitely preferred the art on display in KODE 3 over KODE 2.  But, as it so happens, perhaps the artist whose works I was most enchanted by at the museums was a Norwegian neo-romantic painter who is the focus of a special exhibition running through to December 16 at KODE 2.
One of Norway's most beloved artists (but, I get the sense, little known outside his home country), Nikolai Astrup (1880-1928) lived for a while in Paris and Germany but spent the bulk of his life back home in Jølster, a scenic part of western Norway. Inspired by the diverse likes of English landscape artist John Constable, French Post-Impressionist painter Henri Rousseau and Japanese artist Katsushika Hokusai, Astrup's works are nonetheless distinctively Norwegian -- with many of the landscapes depicted in his works recognizable as those found in his home territory.

Interestingly, a number of works in the Bergen museums got me recalling scenes and scenery that I had seen on my voyage along the Norwegian coast with Hurtigruten.  I'm thinking here of more than one of Astrup's paintings and woodblocks, and also such as the painting by Harriet Backer of the interior of the Uvdal Stave Church that had me wondering if that's how things were like at the stave church in Kvernes during its heyday.  And in doing so, I have to conclude that my experiences on the MS Richard With, and going on excursions like those to Geirangerfjord and along the Atlantic Road, enabled me to better appreciate those works than I otherwise would have! :)
Posted by YTSL at 10:51 PM