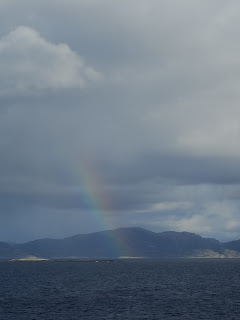 The first of many rainbows I saw in Norway 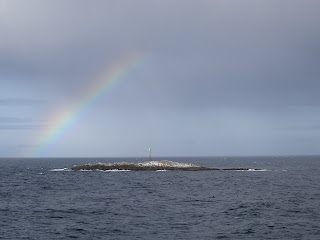 Another gray day, another beautiful rainbow! :)

"This is the coldest June we've had in 40 years!"  This was a refrain that my mother and I heard more than by once, and from different people, in the two weeks or so that we were in Norway last month.  And considering that most days that we were on our Hurtigruten cruise, the forecasted high was 8 degrees Celsius (and at least one day, the temperature was not predicted to even be higher than 6 degrees Celsius), I could easily believe that to be the case!

Fortunately, we were well prepared mentally, and in terms of clothing packed, for the cold; with my luggage including thermal underwear, a super thick wool jumper and the nice warm boiled wool cap that I had bought early on during my visit to Germany (and Luxembourg) last winter in my luggage.  And we did have a chuckle when the Belgian woman who had laughed at our having commented about how cold it was early on in the cruise ended up having been among the people who felt a need to buy one of those super warm Norwegian jackets on sale on board the MS Richard With after we had crossed into the Arctic and seen temperatures drop even further!

If truth be told though, I expected to see more sunshine during springtime in the Land of the Midnight Sun.  (In Norway, early June is still spring rather than summer.)  Instead, there were many periods when it was more gray than bright outside.  In addition, there were days when rain and sunshine would take turns to burst from and/or through the thick clouds -- and occasions when they would simultaneously occur that would result in rainbow sightings galore.  (Indeed, on one memorable occasion, I actually saw two rainbows in the sky at the same time!)

At times during our 12 day voyage, the rain was accompanied by strong winds that made the seas get pretty choppy.  And even though the MS Richard With seldom ventured out into the open seas, on at least three occasions, we heard tales of some passengers having gotten so seasick they didn't want to leave their cabins or even beds -- and especially not to go and have a meal!

In view of my needing to take anti-seasickness pills when going on ferries between Hong Kong Island and Lamma or Macau, I had worried that I'd succumb to seasickness on this Norwegian cruise.  So it came as a big surprise to find that I ended up not feeling a nauseous even once during my time aboard the MS Richard With.

Even more unexpected was my feeling most giddy in Norway a few hours after disembarking from the ship for the final time.  Indeed, for about two days after the cruise, both my mother and I were apt to have moments when we had difficulty adjusting to being back on terra firma -- and would weave about like a pair of drunken sailors even without a drop of alcohol in our systems! ;b
Posted by YTSL at 8:25 PM