Integrity is too twisty for its own good (film review) 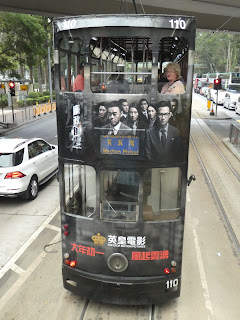 
When talking about Hong Kong cinema with film fans, one often will hear talk about how the movies aren't what they used to be.  If one were to use this Alan Mak film as an example, one could point out that it's nothing like what one used to be able to expect of local cinematic offerings released at this time of the year in that it's far from being a Chinese New Year comedy in subject and tone.  In addition, while it possesses leads who are reputable stars, its reported HK$100 million budget far exceeds the Hong Kong movies of yore.


In view of the filmmakers having that large amount of money to play with, it's only to be expected that Integrity will have pretty good production values.  And like Alan Mak's frequent collaborator, Felix Chong's recent Project Guttenberg, this ambitious 2019 crime procedural does indeed look pretty slick and have a story and characters -- and, one suspects that it's hoped, a viewership -- that goes far beyond Hong Kong (or, for that matter, the Asian continent).


At its heart though, there's little doubt that this is a Hong Kong movie (not least in terms of many of its local details ringing true but less so its foreign ones, such as the inexplicably saddling of its native English-speaking characters with accents from the wrong English-speaking country).  And with many local cinemagoers no longer being inclined to respect or be all that sympathetic to members of the police force in the wake of their conduct during the Umbrella Movement and in the years since, Integrity has ended up with couple of Hong Kong Independent Commission against Corruption (ICAC) officers and a whistle-blowing accountant for its protagonists.


Integrity begins with ICAC chief investigator Chan King Cheung (Lau Ching Wan) visiting accountant Jack Hui (Nick Cheung) in the hotel room he's been placed in prior to his testifying in a case involving the head of the trading company he worked for standing accused of engaging in black market cigarette sales with the help of a senior customs official (Anita Yuen).  Before he's called to court though, the clearly skittish Jack absconds and flies to Australia (where he is a citizen and maintains a pretty nice looking home).


After all concerned get to the courthouse, it is discovered too that Jack's erstwhile boss also has disappeared.  At an emergency meeting back at the ICAC headquarters, King (as Chan King Cheung gets referred to in the English subtitles) is ordered by his boss (Alex Fong Chung Sun) to track down the trading company head while Shirley (Karena Lam), another ICAC investigator and trained negotiator who also happens to be King's estranged wife, is tasked with heading over to Australia to talk Jack in returning to Hong Kong to testify.


A multi-stranded procedural, Integrity's proceedings can be hard to follow, especially by those of us not all that familiar with the world of business (and the kind of things accountants are able to do to ensure that the books are balanced) as well as that of major white collar crime involving millions of dollars.  For the most part though, I decided to just go with the flow and in doing so, found the main story intriguing enough to hold my attention.  In addition, I found all three of the main characters to be interesting and even entertaining -- though this might well have to do more with their being portrayed by able performers who exhibited good chemistry with one another and less with the way they were written.


Unfortunately, in trying to be too clever by coming up with a series of twists in the tale to tie together a whole bunch of characters and stories in the last few minutes of the movie, Alan Mak ended up trying my patience and stretching my tolerance too far.  Like with my experiences viewing many a South Korean movie, I came out of the film screening feeling more disappointed than I would have if this offering had drawn to a close at an earlier stage and wishing that Integrity had been more like many an older Hong Kong crime drama in having a filmmaker far more adept at knowing to quit when he was ahead.

That's disappointing! Sounds like you won't be looking forward to the remaining films in the 'Integrity' trilogy then...

By the way, I've noticed that your score for 'A Lifetime Treasure' has declined from 5.5 to 5 after a day or so. Has the film left you with a bad aftertaste?

I'd be okay watching the other "Integrity" films if they're more like the first 3/4s of this film rather the last 1/4 of it.

As for "A Lifetime Treasure": when discussing it with friends, I got to realizing that I dislike it more than "Napping Kid", which I gave a 5.5 for; so lowered my rating of it to show that!

Great cast though! Sounds as if they were used better than the veterans in A Lifetime Treasure!

It was indeed a good cast. It was nice to see Karena Lam back in a substantial role, and to see her have good chemistry with both Lau Ching Wan and Nick Cheung. "Integrity" would definitely have been a far lesser film without its three leads.