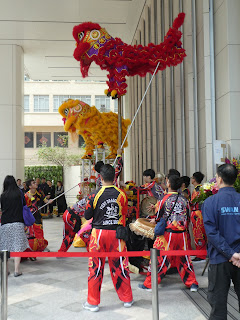 Lions above the crowds at Fortress Hill! 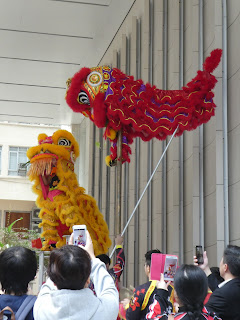 Bestowing blessings on the crowd 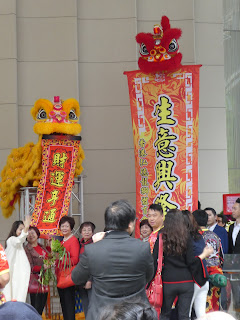 View from the crowded front
On several occasions now this Chinese New Year, I've heard the drum beats that get me expecting to catch sight of a dancing lion or similar festival-loving mythical creature.  But while I did get to see a dancing unicorn paying a visit to a temple on the first day of this Chinese New Year of the pig, it wasn't under the eighth day of this fifteen day festive period that I made my first dancing lion spotting of 2019!
As unlikely as it may seem to those who don't live in places where Chinese New Year is celebrated in a major way, this dancing lion encounter took place in a shopping mall where I had gone to watch a Chinese New Year movie.  While walking through it, I noticed that bunches of vegetables were hanging from the top of entrance ways to several stores (including branches of the likes of H&M and Sasa as well as local chain establishments like Giordano and Watson's) and got to realizing that they were expecting an impending visit by a dancing lion.
Soon afterwards, I heard the banging of cymbals and drums and realized that a dancing lion was nearby.  With a few minutes to spare before the screening would begin of the movie I had elected to check out that day, I decided to wait a bit for the mythical creature's approach and was rewarded by glimpses of it through a large as well as excited crowd of people similarly attracted by the sounds that accompanied the dancing creature.
As it so happened, the next day, I ended up catching sight of a couple more dancing lions -- this time while I was on my way to have lunch with a couple of friends.  Performing in front of a tall office building in my neighborhood, these two dancing lions were actually more interesting looking -- seeing as one was perched atop a pole and another on similarly elevated equipment!  And this time, I actually managed to get some good photos of the spectacle; what with the area in which the dancing lions were performing having roped off to make sure that they and other members of their troupe had space to navigate and move.

As is probably to be expected of a neighborhood that's home to a couple of hotels, there were obvious tourists among the crowd for this event, some of whom looked quite bemused even while others look to be enjoying the spectacle.  By and large though, the people assembled were local folks who appear to never ever get bored by the sight of dancing lions -- and I think I can counted among this group! ;b
Posted by YTSL at 7:36 PM