Artefacts and fun at the Hong Kong Science Museum! 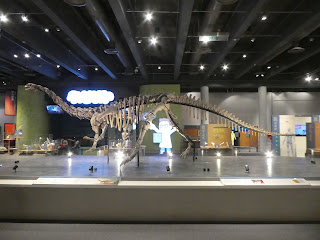 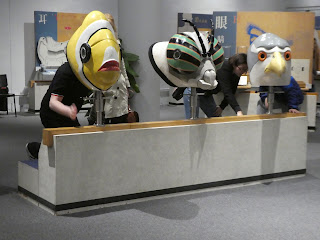 Close by at the Hong Kong Science Museum... ;b
Many years ago, when I was interning at a museum in London, I learnt that museum admissions tend to increase on rainy days.  And it's true enough that, on my travels abroad, I've often turned to museums to save the day when it's been too wet outside for me to really enjoy going for such as a stroll in a beautifully designed stroll garden or an excursion up a mountain.
Even here in Hong Kong, where I do have the option to stay comfortably dry at home rather than brave the rain by venturing outside, I've long looked upon museum-going as something to do when the weather is on the wet side.  And because this week has been on the rainy side, I've actually ended up visiting two different museums -- to check out special exhibitions on show there -- over the course of just a few days!
One of these museological establishments was the Hong Kong Science Museum, which I've actually been to more often to attend Hong Kong International Film Festival screenings than to check out the museum's exhibits!  Indeed, this week's visit was only the second time that I had ever gone into the display areas of this museum that I've looked upon for the most part as being geared for children; with my first visit proper to the place being for the Death in Ancient Egypt special exhibition a couple of years back that featured a number of artefacts on loan from the British Museum.

On that occasion, I had ended up spending quite a bit of time checking out a few of the museum's permanent exhibitions and found myself reminded of the interactive displays at the Science Museum in London that I had loved as a child.  And on this visit to the Hong Kong Science Museum to view the Landscape Map of the Silk Road special exhibition, I ended up being lured into some of its permanent exhibition galleries once more.
This time around, I got to remembering the times I spent in London's Natural History Museum upon finding myself wandering around the Hong Kong institution's Biodiversity Gallery; this particularly after I came across a whole dinosaur skeleton on display there!  And while the latter space is no rival for the former in terms of its holdings as well as its architectural grandeur, I still did find plenty of things to capture my attention, educate me -- and also amuse!
An old university friend who visited from America with her son some months had raved about the Hong Kong Science Museum (and the neighboring Hong Kong Museum of History).  After visiting the adjacent World of Mirrors permanent gallery, I also now know where they had taken a fun photo involving trick mirrors that she had posted on her Facebook timeline -- and am tempted to return to the museum at some point in the near future with a friend to take photos of me posing there too!
Since I was there by myself on this visit, I "made do" by taking photos of the exhibits themselves and, in one instance, other visitors interacting with the exhibits in a way that I found visually amusing.  Since their faces were obscured by the large "animal heads" in which they had inserted their heads,  I figure they wouldn't mind too much that they ended up being the subjects of my camera while doing things in the name of science -- even while they did look pretty funny in the process! ;b
Posted by YTSL at 11:59 PM