A memorable meal at the Hong Kong outpost of Sushi Saito 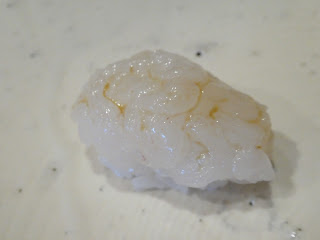 It looks like a mound of rice but it's actually composed
of tiny shrimp along with kernels of rice! 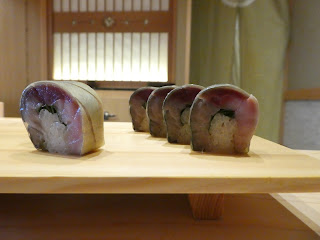 If only I could have had more than one piece of that
beautiful looking -- and great tasting -- mackerel roll... 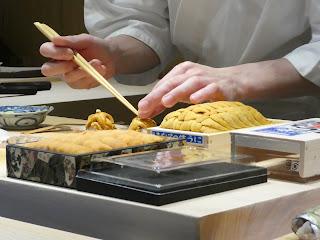 Heaven for lovers of uni (sea urchin)
Close to a year ago now, the first overseas outpost of Sushi Saito opened for business at the Four Seasons Hotel Hong Kong.  Upon hearing and reading raves from sushi aficionados who dined there (and especially after getting the sense that I probably will never get to eat at the super-hard-to-get-into original branch of Sushi Saito in Tokyo), I wanted to give the place a try -- but hung back for a time for a couple of reasons, including the high price of a meal there.
To put things into context, dinner there costs more than twice the price of the same at Uehara, a sushi-ya I really like, and which a two Michelin star chef I met there told me he believes deserves two Michelin stars too!  But after learning a few months ago that lunch at Sushi Saito is (relatively) less taxing on the wallet even while involving some 75% of what's on offer at dinner, I resolved to give it a try -- and went ahead and did so earlier today with the help of a friend who's dined there at least five times now (and made our lunch booking around one month in advance!).
Warned to not get there late for our 12noon date, I arrived at Sushi Saito ten minutes ahead of schedule and every other customer who filled the eight-seater dining space overseen by Takashi Saito's hand-picked helmer of the now two Michelin star Hong Kong outpost, Ikuya Koyabashi.  Despite having read that his modus operandi is to only begin after all of that session's guests were seated at the table, our first course (consisting of deliciously cooked horsehair crab) appeared soon after my friend arrived at the restaurant -- and before the majority of the other customers at lunch did so.
After all the hype and waiting, I must admit to expecting something truly wondrous.  So I felt kind of underwhelmed when the next few courses of the omakase lunch (which included shirako with ponzu and slices of hirame (flounder) and kinmedai (alfonsino)) were merely good to very good -- and also a bit shocked when a rice kernel or two would actually fall off after I picked a piece of sushi up (a sign that the sushi rice wasn't sticking together as well as should be the case).  And while I did like the kohada (gizzard shad) sushi served at the lunch, I do feel that I've tasted better and also seen pieces of this fish that were more beautifully cut and presented (including at Fukuoka's Tenjaku a little more than a year ago).

But then came the maguro (tuna) and things did start to feel really special.  Aged to perfection, both the akami (red meat tuna) and otoro (fatty tuna) were seriously melt in your mouth as well as super flavorful.  Also pretty sublime were the pieces of shiro ebi (white shrimp) and ika (squid) sushi -- both of which, along with such as the hirame and akami, were enhanced by dabs of soy sauce that I suspect has been enhanced by an infusion of something along the lines of a truffly-type mushroom or konbu that gives it an unexpectedly earthy taste element.
Later in the meal came two pieces of sushi I can't recall ever having before.  The first was topped by what Koyabashi-san said in English was sand clam, onto which he applied the sweet sauce I'm more used to tasting on pieces of eel (be it unagi or anago) sushi. The second was a piece of saba (chub mackerel) prepared in the Kyoto -- as opposed to edo-mae (Tokyo) or Osaka -- style, with far pinker meat than I'm used to see with saba sushi.
And then came the uni (sea urchin).  Until today's lunch, the best uni I ever had was at a humble Tin Hau-area sushi-ya whose sudden closure around Chinese New Year several years ago I've lamented from time to time.  Perhaps the most amazing thing about my meal at Sushi Saito today is that I was given not just one but two different pieces of uni sushi -- both consisting of uni from Hokkaido but different types, including the redder and more umami-tasting bafun and either murasaki or kita-murasaki, which was super big in size and also unbelievably sweet -- and that I actually can't decide which one I prefer!
Considering that I almost thought that I was going to burst into tears with happiness after eating the uni, I figured that it'd all be downhill from there.  But then came a delicate piece of anago sushi (without any sauce on it, the better to appreciate the actual taste of the saltwater eel) and a mega piece of maki that included more uni and anago along with ebi (prawn), kampyo (dried shavings of calabash), tamago (Japanese omelette) and kappa (cucumber) followed by what amounted to a two course dessert by way of a couple of pieces of a custardy tamago and a super juicy slice of melon.
With a bowl of earthy miso soup also having been thrown in for good measure, you'd think that this multi-course omakase meal would have left me feeling stuffed.  Strangely enough, though, I actually  didn't feel completely satiated and satisfied after I left the restaurant -- and ended up getting a slice of chocolate cake to eat upon returning to my apartment!
Looking back, I think that the problem was that Koyabashi-san's pieces of sushi were on the small as well as delicate side.  So, while Sushi Saito (Hong Kong)'s refined sushi suited me to a 'T' taste-wise, I must admit to wishing their size of the individual pieces would be less "refined" and, well, more generous.  Fix that and, well, everything would be damn near perfect; and, as it is, I really wouldn't be averse to returning to dine at this highly lauded sushi-ya again!
Posted by YTSL at 10:51 PM