A special sighting involving a dancing unicorn on the first day of Chinese New Year :) 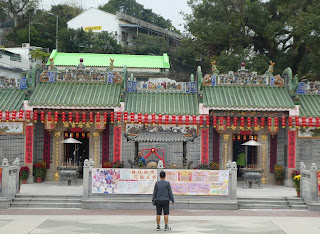 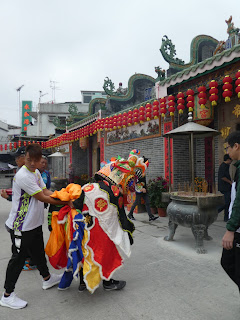 The sound of drums and this unusual sight
caught my attention and drew me to the vicinity! 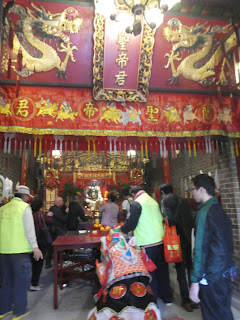 You know it's a special day when a unicorn
goes to pray at a temple ;b
Earlier today, I did what has come to be a personal ritual or tradition on the first day of Chinese New Year: i.e., I went for a hike in the Hong Kong countryside.  Like on two previous occasions already in 2019, I met up with friends in Sai Kung town before catching a green minibus that took us to our trail head up in the Sai Kung Peninsula.  But unlike on those two previous occasions, I arrived earlier in town than expected and consequently was able to take in some sights in Sai Kung town beforehand.
Since it's been some years since I paid a visit to the Tin Hau Temple in Sai Kung town, I thought it'd be worth doing so again this morning.  While walking towards it, I could see that there were festive decorations installed in its vicinity in the form of bright red banners and lanterns as well as colorful flags.  And I also could hear drums and gongs being beaten -- and upon getting near the site, got to realizing that they were being beaten for a dancing unicorn that was paying a visit to the temple!
I wasn't in time to see the dancing unicorn pay its respects to Tin Hau but I did get to witness it paying its respects to Kwan Ti (the god of war and righteousness who, like Tin Hau, was a real life historical figure) in the hall in the temple where a statue of him has pride of place.  Almost needless to say, I found this to be a pretty cool and special experience; one that most definitely doesn't take place every day -- but, then, the first day of Chinese New Year is a pretty special day in Hong Kong (and other parts of the world with a significant ethnic Chinese population)! :)
Posted by YTSL at 9:25 PM