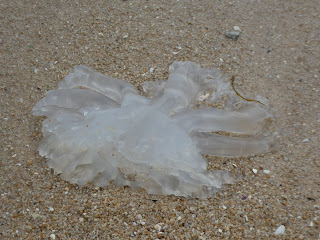 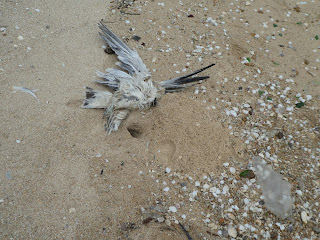 Long dead bird on the same beach on Cheung Chau :( 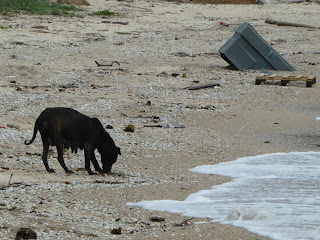 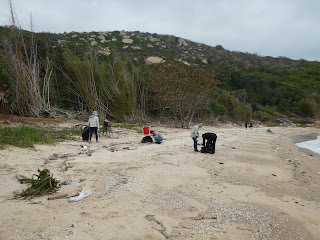 Beach clean-up volunteers at work amidst it all
Have you heard the saying "Life's a bitch (and then you die)"?  Not only have I done so but I've also heard the saying rendered as "Life's a beach and then you die".  And that latter line was what I found myself recalling on at least a couple of occasions when taking part in yet another beach clean-up at Cheung Chau's Coral Beach (aka Tung Wan Tsai) earlier today.
Here's the thing though: while I think those who coined that particular phrase had meant it to mean that life was fun until you die, I think those dead animals my group of volunteers came across at the beach today didn't have the most pleasant of lives as well as deaths; not least because I reckon they died prematurely as a result of the pollution created by humans.
To be sure, I didn't look too closely at their corpses -- and thus didn't actually find such as 1,000 pieces of plastic in their stomach (as was the case with a dead whale which washed ashore on one of Indonesia's thousands of islands late last year).  Nonetheless, I wouldn't be surprised at all if the dead bird, fish, squid and jellyfish I saw on the beach today had died after ingesting too much of the plastic that's found not only strewn on land but also in the seas and oceans.
While I've come across dead fish before over the course of beach clean-ups (particularly after red tide sightings in Hong Kong), today's was the beach clean-up where I've come across the most variety of dead animals.  The superstitious part of me was thanking heaven that this beach clean-up hadn't taken place during Chinese New Year since the sight of so much death around me would have been taken as an inauspicious omen.  Even so, these were not sights one likes to come across any day -- especially if one is a lover of nature, the environment or, for that matter, seafood!
While we're on the subject of seafood: seeing the dead jellyfish that had washed ashore on Tung Wan Tsai today got me really realizing how plastic bags can get mistaken as jellyfish, and thus food, by sea turtles and other sea creatures that view them as food.  And, in fact, several beach clean-up participants had to be cautioned against mistaking the jellyfish for a large, water-filled plastic bag!
Late into our beach clean-up, our group were joined on Tung Wan Tsai by a wild dog that was on the thin side and also obviously was a new mother.  Seeing her rooting about for food among the trash, I was relieved to find that the dead jellyfish that had washed ashore previously had then been washed back to sea by the tide as I have personal experience of getting badly stung by one of those creatures and wouldn't wish it on anybody else, including wild dogs!
Over on the beach clean-up front: I really appreciate that despite the weather forecast having included mention of some showers today, we had a good turnout.  Happily, we were rewarded by the Hong Kong Observatory's predictions proving to be incorrect once more and, working in what turned out to be pretty nice (not too hot, not too cold, and definitely not too wet at all) conditions, were able to collect more than 30 bags of trash between us by the time we decided to call it a day and reward our efforts with a delicious lunch at one of Cheung Chau's many eateries.
Posted by YTSL at 8:24 PM

Do you mean today? Showers did come in the evening. Sort of heavy after 2000 hrs too.

Yes, I did mean today -- and I did also notice the showers in the evening. Thank goodness there was nothing like that earlier in the day! :)

I guess now I want to know if beach combing popular. (treasure hunting) I've done it a few times. When I visit the ocean, but nothing interesting.
Coffee is on

I don't think beachcombing is popular in Hong Kong, not least because many people here are on the superstitious side and have a prejudice against owning second-hand items.