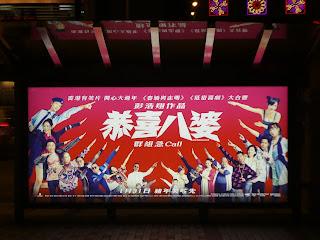 Back in 2001, in the same month that Johnnie To and Wai Ka Fai co-helmed a movie adaptation of his novel, Full-Time Killer, Pang Ho Cheung made his directorial debut with You Shoot, I Shoot.  While the former film had the bigger stars, I enjoyed the latter work far more.  Consequently, I resolved to follow the writer turned filmmaker's cinematic career pretty closely and actually have viewed every single movie that he's helmed to date.

Over the years, there have been some Pang Ho Cheung films that really hit the mark as far as I'm concerned (e.g., Men Suddenly in Black, Aberdeen and Women Who Flirt) but also ones which didn't quite do it for me (e.g., Love Off the Cuff).  To sum it up in one word: I think his output can be uneven.  And uneven also is one of those words that can be used to describe Missbehavior, his star-studded ensemble comedy released in time to be viewed during this Chinese New Year of the pig that nonetheless isn't really a bona fide Chinese New Year movie in that it's friend- rather than family-centric and features such as a bondage scene (albeit one played for laughs) and copious amounts of boob jokes.

Missbehavior's plot can be summed up as follows: A group of "bitches" (the individuals have a tendency to refer to others in the group as baat por (Cantonese for bitch)) band together to help one of their own after she mistakes her boss' breast milk for low fat milk (yes, really), uses it to make a valued company client a cup of "flat white with low fat" and needs to replace the milk she took from the company fridge before her boss leaves work that day.  And a good measure of the film's star power can be seen by the "bitches" including ones played by Gigi Leung and Dada Chan, the boss in question being essayed by Isabella Leong and the valued client being portrayed by Patrick Tse.

To his credit, Pang Ho Cheung really does make the most of the many celebrity cameos, all of them effective and, particularly in the cases of Miriam Yeung and Lam Suet's, highly amusing.  He also appears to have elicited good acting performances from those actresses and actors with more significant amounts of time on the screen, with Dada Chan having put in a particularly eye-catching appearance in Missbehavior.

But while Pang Ho Cheung the director appears to have done a generally good job (at least with the film's cast, which includes him in a role as the ex-boyfriend of two of the "bitches"), my sense is that Pang Ho Cheung the writer was inclined to be over lazy, often resorting to puerile jokes and scatological humor to milk (pun intended!) some cheap laughs from the offering's audience.  In particular, there's one example of toilet humor that literally is shit and not only isn't all that funny but also was actually so disgusting I found myself being super thankful that I had not bought anything from the cinema's concessions stand to eat while viewing the movie!

Still, Missbehavior's script does have some good bits that don't require the viewer to be in a super indulgent or majorly childish mood to appreciate.  Among the best jokes in the film are those which are topical, be they about Hong Kong's ridiculously high property prices or involve three characters dressing up as the Hong Kong Fire Service's "Anyone" mascot.  In addition, it was nice to see friendships involving a diverse group of individuals and gay love being portrayed in a mainstream movie in a way that was ultimately sympathetic rather than just for laughs.

A friend of mine talks about how movies he views over the Chinese New Year period get given a "Chinese New Year discount".  Like him, I am inclined to view Chinese New Year releases in a more generous light than usual.  So, while Missbehavior is not one of Pang Ho Cheung's best movies, I won't say that I wasn't entertained by it.  Nonetheless, I do wish I had been entertained more consistently throughout the 90 minutes or so I spent viewing it, and hope that its undeniably talented filmmaker will do more and better with his next cinematic effort(s).

I get annoyed at sick humor and bad language in a film. Good films don't need such extras.

I think that the use of "bad" language can be justified in some films (e.g., if the real-life equivalent of the characters portrayed in a drama are the sort who would use "bad" language) but would agree with you that sick humor is often a sign that the film's not going to be all that good.

6.5/10?! I think that's about right, actually. I enjoyed it but it is certainly not PHC's best work. Also, I don't think it's a film that I will watch a second time.

So 'A Home With a View' is very good! How about 'A Lifetime Treasure' and 'Integrity'?

I've yet to view "A Lifetime Treasure" and "Integrity". Took a break from Hong Kong movies to watch "Sunset Boulevard" today! But I do intend to check them out soon -- hopefully some time next week.

Boob jokes. I am in. How are Anita and Francis looking these days. Have not seen either in ages.

Cheung Tat Ming has certainly aged a lot. I hope his health is better now.

As someone who has seen every one of Pang Ho Cheung's films, what do you think of the news that he is going to direct a trilogy of films based on Louis Cha's 'Deer and Cauldron'?

I didn't realize until after doing some research that Cheung Tat Ming had had problems with cancer some years back. At the same time, I'm now suspecting he probably was made-up to look much worse in "A Home with a View" than in real life since I remembered seeing him in "Agent Mr Chan" last year and not thinking he looked bad.

As for your query re Pang Ho Cheung: he does have a serious side (cf "Aberdeen") but I can't imagine that Louis Cha would have been pleased to hear of his making film adaptations of "Deer and Cauldron". Still, that would just mean him joining the long list of filmmakers whose film adaptations of Louis Cha's works were not satisfactory to the writer and/or his fans!